In humans, the end product of the metabolism of the purines, adenine and guanine is urate.

In humans, the end product of the metabolism of the purines, adenine and guanine is urate (Figure 8.19). There are three sources of purines namely diet, the breakdown of endogenous nucleotides and nucleic acids and de novo synthesis. Most dietary nucleic acids are ingested in the form ofnucleoproteins from which urate is produced by the GIT . The degradation and de novo synthesis of purines are linked (Figure 8.20). The body urate pool, and therefore plasma concentration, depends upon the relative rates of urate formation and excretion. Both the kidneys and the GIT excrete urate with renal excretion accounting for approximately 66% of the total. Almost all the urate is filtered at the glomerulus but most is reabsorbed by the proximal tubule. However, both reabsorption and secretion occur in the distal tubule, so that the net effect is to excrete about 10% of the urate. Urate secreted into the GIT is metabolized to CO2 and NH3 by bacterial action or uricolysis. 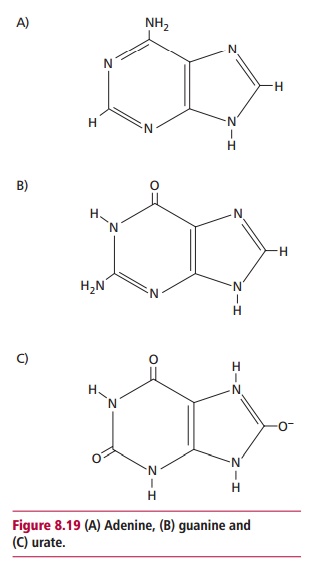 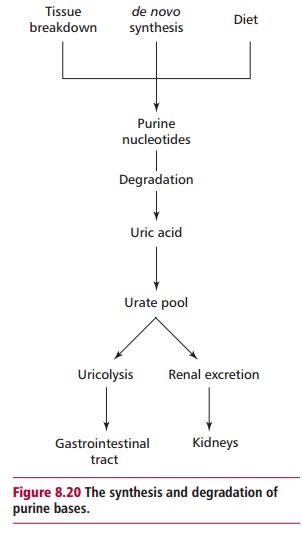 The reference range for serum urate is 0.1 to 0.4 mmol dm–3. However, there is a wide variation in the concentration of urate in plasma or serum even in health. Plasma urate concentration tends to be higher in males than females, is highest in obese individuals, those from affluent social classes and those with a high protein and alcohol intake. Thus hyperuricemia is defined as a concentration greater than 0.42 mmol dm–3 in men and more than 0.36 mmol dm–3 in women.

Hyperuricemia may arise as a result of increased production of uric acid or decreased excretion or both. Excessive synthesis may occur because of a defective synthetic metabolic pathway, stimulation of de novo purine synthesis by alcohol or by increased nucleic acid turnover, as in malignant disease, or the use of cytotoxic drugs. An excessive dietary intake of purines will also produce hyperuricemia. A decreased urate excretion may be due to a reduced GFR giving rise to hyperuricemia. Increased proximal tubular reabsorption and decreased distal tubular secretion of urate have similar effects. Lactate and A-hydroxybutyrate compete with urate for excretion by the distal tubule. Therefore lactic acidosis or ketosis are often associated with hyperuricemia. Some drugs, for example lowdoses of aspirin, can inhibit the distal tubular secretion of urate causing hyperuricemia. 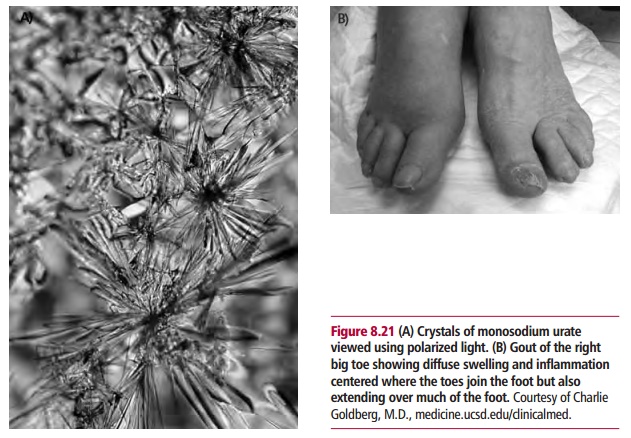 Urate has low solubility and the ECF easily becomes saturated at concentrations just above the upper limit of the reference range. There is a tendency for crystalline monosodium urate to form in people with hyperuricemia, giving rise to gout. Crystals of monosodium urate (Figure8.21(A)) tend to form in cartilage and synovial fluid of joints and particularlythose of the big toe causing gout (Figure 8.21(B)). The crystals are phagocytosed by neutrophil leukocytes and may cause damage to lysosomal membranes within these cells . As a consequence, lysosomal contents are released, causing damage to both leukocytes and surrounding tissues with an associated inflammatory response . Gout may be primary, with no known cause, or secondary, as a consequence of another disorder. Primary gout is characterized by recurrent attacks of arthritis. It is more common in men than women. The metabolic defect in patients is unknown but a number of abnormalities may be responsible for the overproduction of urate and therefore increased urinary urate output. In many patients there is a combined defect of urate overproduction together with its impaired renal excretion. Patients with primary gout often have deposits of urate in their soft tissues and some can develop renal stones composed of urate salts. The risk that a normal person will develop gout varies with their urate concentration. The annual incidence of gout in men is low, about 0.1%, when the urate concentration is less than 0.42 mmol dm–3. This increases to 0.6% when the concentration is 0.42–0.54 mmol dm–3 and 5% when urate concentrations are greater than 0.54 mmol dm–3. The reason for the onset of acute attacks in gout is unclear since a sharp rise in the concentration of urate is not usually demonstrable.

Secondary gout is rare but can arise from a number of other disorders including myeloproliferative disorders such as polycythemia vera, where the hyperuricemia is due to an increased cell turnover, the use of cytotoxic drug therapy that increases cell destruction and the breakdown of nucleic acids, and psoriasis with its increased turnover of skin cells.

Anti-inflammatory drugs, such as indomethacin, are used to treat acute attacks of gout but have no effect on the hyperuricemia which is treated with a diet low in protein and alcohol. Urate lowering drugs, for example allopurinol, that prevent the formation of urate and decrease de novo synthesis of purines, are used in long-term treatment or when plasma urate levels are persistently higher than 0.6 mmol dm–3.

Hypouricemia, where the concentration of urate in serum is below the reference range, is uncommon and not of clinical significance. Its occurrence is due to a decreased urate synthesis, as in congenital xanthine oxidase deficiency and severe liver disease, or to increased excretion of urate as seen in renal tubular disorders, such as the Fanconi syndrome. Hypouricemia may also result from excessive use of drugs such as allopurinol.