Potassium ions are necessary to maintain cell volume, for the optimal activities of a number of enzymes, and to maintain the resting potential of cell membranes and therefore neuromuscular functions, especially in the heart .

Potassium ions are necessary to maintain cell volume, for the optimal activities of a number of enzymes, and to maintain the resting potential of cell membranes and therefore neuromuscular functions, especially in the heart . The intake of K+ varies between 30 and 100 mmol day –1 and losses are equally variable. The kidneys excrete most ingested K+ with a smaller amount being eliminated by the GIT. A high concentration of plasma K+ stimulates the release of aldosterone that, in turn, increases the renal excretion of K+. Gastrointestinal losses can be significant during vomiting and diarrhea. Only very small amounts of K+ are lost in sweat. The average 70 kg human contains about 3600 mmol of K+(Figure 8.8), almost all being found in the ICF. Values for the concentration of K+ in the serum below and above the reference range of 3.4 to 4.9 mmol dm–3 are called hypokalemia and hyperkalemia respectively. Hyperkalemia is the more common clinical condition. 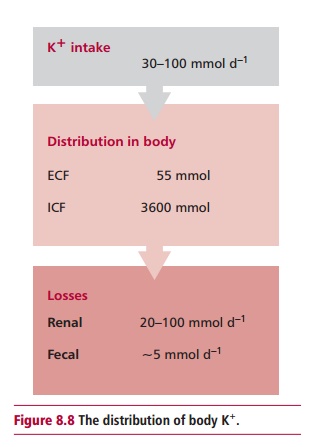 Unlike Na+, the plasma K+ concentration does not vary significantly with water loss or overload. However, hyperkalemia must be identified because concentrations of serum K+above 7 mmol dm–3 can result in cardiac arrest and death. Renal failure, acidosis, aldosterone deficiency, damage to cells and an excess intake of K+ can all cause hyperkalemia. In renal failure, the kidneys are unable to excrete K+ because of the low GFR. Further, acidosis, a common feature of renal failure, leads to hyperkalemia because the low pH of the ECF means that K+ moves out of cells in exchange for H+, to return the pH to reference values. A deficiency of aldosterone, such as in Addison’s disease where the kidneys lose their ability to excrete K+, can result in hyperkalemia. The destruction of cells during trauma can release large amounts of K+ causing hyperkalemia. Lastly, an excessive oral or parenteral intake of K+ is a rare cause of hyperkalemia. The treatment of hyperkalemia includes infusion of insulin and glucose to promote the entry of K+ into cells. Severe hyperkalemia may require dialysis.

Hypokalemia is clinically significant, giving rise to muscular weakness and cardiac arrhythmias, hence patients often present with breathlessness and chest pain. The causes of hypokalemia include increased K+ losses from the GIT or kidneys, alkalosis, certain clinical disorders, some drugs, or a decreased K+ intake. Excessive losses from the GIT can occur during vomiting and diarrhea. Hypokalemia occurs in alkalosis because the pH of the ECF is high and H+ moves from the ICF to the ECF as part of the buffering process, while K+ moves in the opposite direction leading to hypokalemia. A number of disorders, for example, Cushing’s and Conn’s syndromes, are associated with increased cortisol and aldosterone production respectively. Both hormones have mineralocorticoid activity and stimulate the renal retention of Na+ in exchange for K+ causing hypokalemia. Drugs, such as carbenoxolone used to treat gastric ulcers , can cause hypokalemia because of their mineralocorticoid activity. Decreases in oral or parenteral intakes of K+ are rare but can lead to hypokalemia. Patients with hypokalemia are treated with oral K+ salts. Severe hypokalemia may require intravenous infusions of K+.