Sodium ions are significant constituents of tissues, including bone, they control the volume of ECF and are required for normal neuromuscular functions.

Sodium ions are significant constituents of tissues, including bone, they control the volume of ECF and are required for normal neuromuscular functions. The intake of Na+ is variable, from less than 100 mmol to more than 300 mmol day–1. Losses are also variable, but renal loss is normally matched to intake. Small amounts of Na+ are lost via skin and in feces and, under some circumstances, the GIT can be a major route of Na+ loss, as in diarrhea. 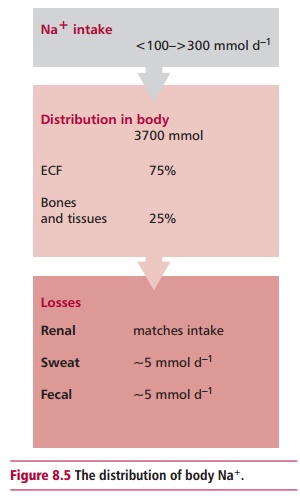 The average 70 kg man contains 3700 mmol of Na+ (Figure 8.5), of which 75% is found in the ECF. Hyponatremia and hypernatremia refer to serum concentrations of Na+ below and above the reference range of 135–145 mmol dm–3. Hyponatremia is caused by an excessive retention of water or the loss of Na+, these two conditions resulting in different clinical features. The retention of water produces behavioral disturbances, headaches, confusion, convulsions and eventually coma. The symptoms associated with excessive loss of Na+ are weakness, apathy, dizziness, weight loss and hypotension. Hyponatremia due to water retention is the more common. Water may be retained with or without an increase in total body Na+. The former produces an edema, giving an edematous hyponatremia, whereas the latter results in nonedematous hyponatremia.

Edema is the excessive accumulation of fluid in interstitial compartments of the body, resulting from an increase in the concentration of Na+ in the ECF. It results in swelling, which may be localized in, for example, legs and ankles (Figure 8.6) but can be more general in the chest cavity, abdomen and lungs. The major causes of edematous hyponatremia are heart failure, nephrotic syndrome and liver disease. All three reduce blood volume and stimulate aldosterone secretion, which, in turn, stimulates the retention of Na+. The reduced blood volume also stimulates release of ADH from the posterior pituitary. Both result in more water than Na+ being retained, giving rise to hyponatremia. Nephrotic syndrome leads to a loss of blood proteins to the urine, reduced concentrations of albumin leading to edema. The commonest cause of nephrotic syndrome is renal damage by diseases such as glomerulonephritis . The treatment of edematous hyponatremia is aimed at its underlying cause, for example heart failure, kidney or liver diseases, and at removing the excess water and Na+ using diuretics, and restricting water intake. 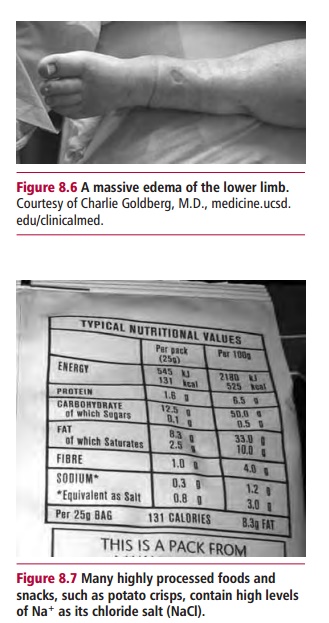 Nonedematous hyponatremia, the result of water overload without an increase in total body Na+, is due to a decreased excretion of water from the syndrome of inappropriate secretion of ADH (SIADH), a severe renal failure or an increased intake by compulsive drinking or excessive parenteral fluid. The SIADH is a common finding in clinical practice. Patients present with reduced plasma osmolality, normal kidney function and a low output of urine. This syndrome is associated with many conditions, including malignancies, for example carcinoma of the lungs or bowel , infections, such as pneumonia and tuberculosis , trauma following, for example abdominal surgery, or it may be induced with drugs, such as chlorpropamide. All these conditions result in SIADH with water retention and a low urinary output. The excessive water is distributed between ICF and ECF and so the clinical signs of water overload, edema, may be mild or absent. Treatment of SIADH is to reduce water intake to less than 750 cm3 day–1 and to correct its underlying cause.

Hyponatremia from loss of Na+ decreases the total body Na+ of patients. The losses may occur from vomiting, diarrhea, kidneys (aldosterone deficiency), the effects of drugs, such as spironolactone, or a decreased dietary intake of Na+, although this is very rare. The loss of Na+ is always accompanied by water loss; as the volume of the ECF decreases the release of ADH is stimulated and the increased reabsorption of water produces hyponatremia. The decreased volume of ECF means that the patient presents with the clinical symptoms of dehydration. Treatment is aimed at correcting the Na+ losses with intravenous infusions of 0.9% NaCl, and treating the underlying cause, for example steroid therapy for aldosterone deficiency as in Addison’s disease .

Hypernatremia is caused by water depletion, water and Na+ depletion with the loss of water predominating, or to an excess of Na+ (Figure 8.7). Its clinical features are variable but, in general, patients present with muscular weakness, hypertension, intense thirst (polydipsia) and polyuria. If fluid loss occurs, the features associated with dehydration may be present. However, if Na+ is in excess, raised blood pressure or edema may be seen.

Water depletion results from a decreased intake, such as in comatose patients, infants or the elderly. The body conserves water by producing a low volume of concentrated urine. Increased water losses can also occur in diseases such as diabetes insipidus that result in large quantities of dilute urine . Hypernatremia with water and Na+ depletion occurs only if relatively more water than Na+ is lost. It is commonly caused in children by excessive sweating or diarrhea. Patients respond by producing low volumes of concentrated urine. The condition may also occur during osmotic diuresis in patients with diabetes mellitus where both water and Na+ are lost, together with other electrolytes in large volumes of dilute urine, producing hypernatremia and a decreased ECF. An excess of Na+in the ECF is caused by an increased intake or decreased excretion of Na+. The intake may be oral, for example salt tablets or seawater, or parenteral as in the treatment of Conn’s or Cushing’s syndromes . Both disorders produce dilute urine due to retention of Na+ by the kidneys.

Hypernatremia is treated by oral administration of water. If this is not possible, then 5% dextrose is administered parenterally. If hypernatremia is due to an excessive Na+ intake, measures to remove it must be considered.