The functions of the kidney include maintaining the volume of the plasma and its concentrations of electrolytes, such as Na+ and K+, and keeping its pH within normal physiological ranges.

The functions of the kidney include maintaining the volume of the plasma and its concentrations of electrolytes, such as Na+ and K+, and keeping its pH within normal physiological ranges. This is largely achieved by varying the amounts of water and salts excreted, the removal of excess H+ and the regeneration of HCO3–. Kidneys also excrete waste products, such as urea, urate and creatinine, and produce the enzyme rennin and the hormones erythropoietin and calcitriol (also called 1 α,25-dihydroxycholecalciferol, 1 α,25DHCC). These control blood pressure, stimulate the production of erythrocytes by the bone marrow and regulate the absorption of Ca2+ by the gastrointestinal tract (GIT) respectively. Kidneys also synthesize prostaglandins and degrade hormones, such as insulin.

Each kidney is composed of an outer fibrous capsule, a cortex, a middle medulla and an inner pelvis region (Figure 8.2A). The tough capsule surrounding each kidney offers protection against trauma and prevents the entry of bacteria . Kidneys are composed of about a million functional units called nephrons each composed of a tuft of capillaries called a glomerulus and atubule. Tubules have four different regions: the proximal tubule, the loop of Henle, the distal tubule and the collecting duct (Figure 8.2B). The cortex 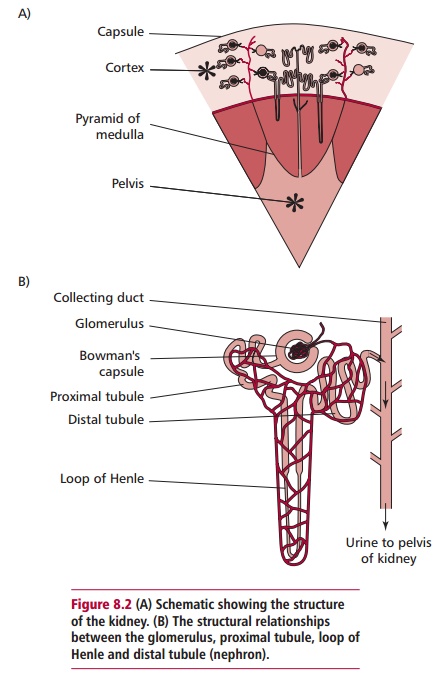 contains the Bowman’s capsules and their glomeruli. The medulla is composed of the tubules arranged in pyramids that lead into calyces that, in turn, lead into the pelvis of the kidney. The pelvis drains into the ureters that take urine from the kidneys to the bladder.

Kidneys have a rich blood supply and normally receive about 25% of the cardiac output. The renal artery supplies blood at a high pressure to afferent arterioles that supply the glomerular capillaries. Glomerular capillaries drain into efferent arterioles that, in turn, divide to form a capillary network covering the nephron (Figure 8.2B). Blood eventually leaves each kidney in a renal vein. Blood is separated from the lumen of the tubules by three layers: the capillary endothelial cells, a basement membrane and specialized epithelial cells of the Bowman’s capsule, called podocytes (Figure 8.3). Openings between the extensions of the podocytes are called fenestra. The basement membrane contains negatively charged glycoproteins that give the basement membrane an overall negative charge. The hydrostatic pressure of blood in the glomerulus is high at 10 kPa because of its direct route from the heart and because the diameters of afferent arterioles supplying the glomeruli are less than the efferent arterioles collecting blood from them. This forces the plasma to filter through the layers into the lumen of the capsule. The hydrostatic pressure of blood in the glomerulus is opposed by osmotic pressure of 4 kPa generated by its plasma proteins and a back pressure of 2.7 kPa exerted by the filtrate in the Bowman’s capsule. Thus the effective pressure, Peff, is:

Water and small molecules are passively filtered into the Bowman’s capsule leaving blood cells and plasma proteins in the capillary. Particles with a Mrless than 5000, such as electrolytes, sugars, amino acid, urea and somesmall polypeptides and proteins pass freely from the plasma through the glomerular wall into the lumen of the capsule. Substances with Mr up to 68 000, can penetrate to some extent but larger molecules, such as proteins above 68 000 are excluded because of their size and to some extent their charge, given that most plasma proteins are negatively charged at pH 7.4. Hence the initial filtrate in the capsule lumen has a composition similar to that of plasma except that it is largely free of protein. Most of the filtrate is reabsorbed as it passes along the nephron. The proximal tubule is responsible for bulk reabsorption of filtrate while the distal tubule is important for fine tuning its composition depending upon the needs of the body. Normally all the glucose, amino acids, K+ and HCO3– and about 75% of the Na+ are absorbed by energy dependent mechanisms. The reabsorption of water occurs passively and follows Na+ reabsorption. Approximately 90% of the filtered Na+ and 80% of water is reabsorbed in the distal tubule. More Na+ is reabsorbed in the distal tubule by the cells exchanging it for K+ and H+. This exchange is controlled by 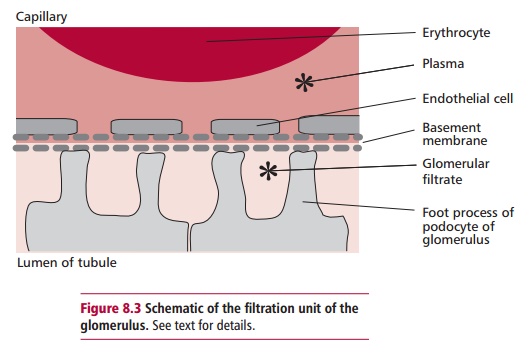 aldosterone . Between 6 and 12% of the filtered urate is excreted by the kidneys with the remainder being reabsorbed in the proximal convoluted tubule. Tubular fluid passes into collecting ducts that extend into the renal medulla and discharge urine into the renal pelvis. About 1 to 2 dm3 of urine is produced per day depending on the amount of fluid intake with larger volumes being produced after increased intake of water.