Calcium is required for bone and teeth structure, the release of neuro-transmitters and initiation of muscle contraction, as a cofactor for coagulation factors , some enzyme activities and it also acts as an intracellular second messenger for a number of hormones .

Calcium is required for bone and teeth structure, the release of neuro-transmitters and initiation of muscle contraction, as a cofactor for coagulation factors , some enzyme activities and it also acts as an intracellular second messenger for a number of hormones . 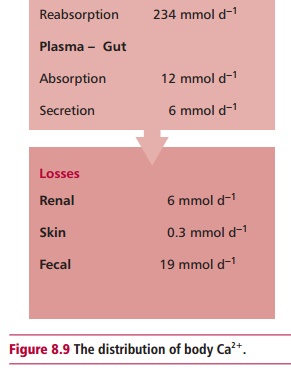 The normal dietary intake of Ca2+of about 25 mmol day–1 is supplemented by the reabsorption of Ca2+ from gastrointestinal secretions. Approximately 19 mmol of Ca2+ is lost in the feces daily. The kidneys normally filter about 240 mmol of Ca2+ daily but, as most of this is reabsorbed by the tubules, normal renal loss of Ca2+ is only about 6 mmol per day (Figure 8.9). Calcium is the most abundant mineral in the body and the average adult contains approximately 1 kg or 25 000 mmol of Ca2+. Approximately 99% of Ca2+ is present in the bone. About 500 mmol of Ca2+ is exchanged daily between bone and the ECF. The ECF contains about 22.5 mmol of Ca2+, of which 9.0 mmol is present in the plasma. Approximately 47% of Ca2+ in plasma occurs as free ionized Ca2+, 46% is protein bound and 7% is complexed with citrate or phosphate. Only free Ca2+ is physiologically active and its plasma concentration is controlled by homeostatic mechanisms involving the hormones parathyroid hormone (PTH), calcitriol and calcitonin (Figure 8.10). Parathyroid hormone is secreted by the parathyroid glands in response to a fall in the concentration of plasma ionized Ca2+ and vice versa. It stimulates the release of Ca2+ from bone, a process called bone resorption, and a decreased reabsorption of HCO3– by the kidneys that produces an acidosis, which helps to increase plasma ionized Ca2+ and stimulates the synthesis of calcitriol from cholecalciferol in the liver. 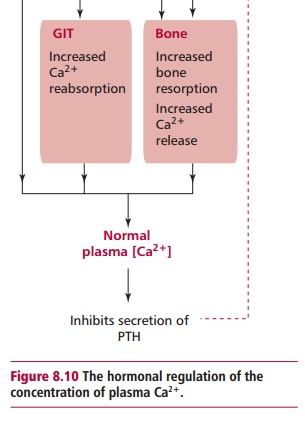 This hormone is also formed in the skin by the action of ultraviolet light on 7-dehydrocholesterol. Calcitriol increases Ca2+ and Pi absorption from the GIT and increases bone resorption. The physiological function of calcitonin remains unclear but it is known to reduce the concentration of Ca2+ in plasma by inhibiting both bone resorption and the renal reabsorption of Ca2+.

The serum reference range for total Ca2+ is 2.20–2.60 mmol dm–3 and for free 1.20–1.37 mmol dm–3. Values above and below these are called hypercalcemia and hypocalcemia respectively.

The renal damage associated with hypercalcemia is its most serious consequence. Hypercalcemia may suppress neuromuscular excitability causing constipation and abdominal pain and affect the CNS, resulting in depression, nausea and anorexia. The nausea may cause vomiting and therefore dehydration. Calcium can stimulate gastrin and therefore gastric acid secretion and so hypercalcemia may be associated with peptic ulcers . Hypercalcemia may cause arrhythmias and in severe cases may result in cardiac arrest . The commonest causes of hypercalcemia are malignant disease or primary hyperparathyroidism. Less common causes include thyrotoxicosis, vitamin D intoxication, thiazide diuretics and familial hypocalciuric hypercalcemia. Rare causes are tuberculosis, sarcoidosis, acromegaly, milk-alkali syndrome and idiopathic hypercalcemia of infancy. 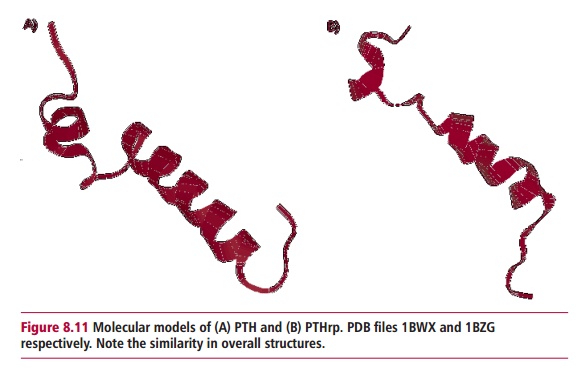 Cancerous tumors of the lungs stimulate an increase in plasma Ca2+ by producing a PTH related protein (PTHrp) that resembles the structure of PTH (Figure 8.11). Cytokines and prostaglandins released by tumors that have metastasized to the bones, may lead to increased resorption of Ca2. Primary hyperparathyroidism occurs most commonly due to a parathyroid adenoma, which is a benign tumor, and only rarely due to a parathyroid carcinoma. It affects both men and women at any age but is most common in postmenopausal women. In primary hyperparathyroidism, there is excessive PTH secretion that causes hypercalcemia and sometimes hypophosphatemia, which increases bone turnover particularly of the metaphyses (Figure 8.12). Thyroid hormones have no direct effect on Ca2+ homeostasis but can cause increased bone turnover by increasing osteoclastic activity and giving rise to mild hypercalcemia during thyrotoxicosis. An excessive iatrogenic or accidental ingestion of vitamin D or thiazide diuretics that interfere with renal Ca2+ loss can also cause hypercalcemia. 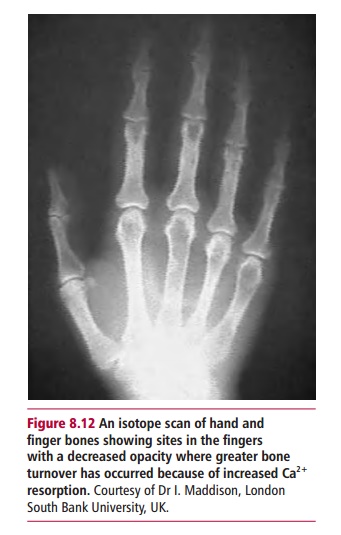 Familial hypocalciuric hypercalcemia is a recently recognized autosomal dominant condition that develops from childhood. It is characterized by chronic hypercalcemia but is usually asymptomatic, with normal levels of PTH and no parathyroid adenoma. The mechanism underlying this condition is unknown. Both sarcoidosis and tuberculosis are granulomatous diseases. In these conditions, hypercalcemia occurs as there is increased production of calcitriol by macrophages in the granulomas. Hypercalcemia is occasionally seen in acromegaly, probably due to stimulation of calcitriol production by excess growth hormone. Hypercalcemia may occur in people who ingest large amounts of milk together with alkali antacids, such as HCO3–, to relieve symptoms of peptic ulceration. An alkalosis occurs that is believed to reduce renal Ca2+ excretion although the precise mechanism is still unclear. This milk-alkali syndrome is very rare as antacid treatment of peptic ulcers has been replaced by drugs that inhibit gastric acid secretion. The condition idiopathic hypercalcemia of infancy is associated with hypercalcemia because of an increased sensitivity to vitamin D in bone and the GIT but the precise mechanism underlying this hypercalcemia is unknown. 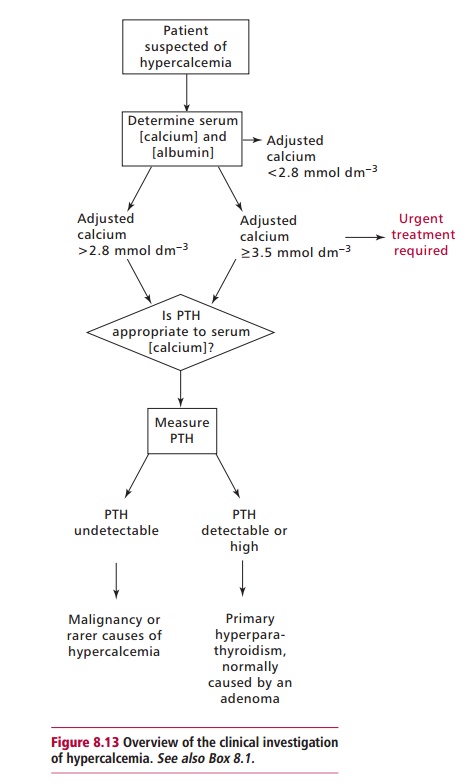 of approaches are taken to managing hypercalcemia. The underlying cause should be treated wherever possible. Intravenous saline may be administered in dehydrated patients to restore the glomerular filtration rate and enhance Ca2+ loss and hydration. Drugs, such as frusemide, inhibit renal reabsorption of Ca2+ and promote its excretion while bisphosphonates lower Ca2+ levels by inhibiting bone resorption. In very severe cases, dialysis or emergency parathyroidectomy may be necessary. In some cases, an artefactual hypocalcemia may be reported when blood samples are erroneously collected into tubes containing ethylene diaminetetraacetic acid (EDTA). This anticoagulant is a chelator of Ca2+ and its use will lead to low values for Ca2+ concentrations.

The clinical effects of hypocalcemia include behavioral disturbances, paresthesiae, tetany, convulsions and cataracts. Its major causes are renal failure, Mg2+ and vitamin D deficiencies, hypoparathyroidism and pseudohypoparathyroidism. Chronic renal failure may decrease the reabsorption of Ca2+ by decreasing the synthesis of calcitriol leading to hypocalcemia. This may lead to bone disease because the increased output of PTH arising from the hypocalcemia can increase osteoclast activity. Magnesium ions are required for PTH secretion and its action and a deficiency produces hypocalcemia. A deficiency in vitamin D may arise from a poor diet, malabsorption or inadequate exposure to sunlight leading to an inadequate absorption of Ca2+ from food. Hypoparathyroidism, or a reduced activity of the parathyroid glands with decreased production of PTH, results in hypocalcemia. The condition can be congenital, where there is an absence of the parathyroid glands, or acquired hypoparathyroidism that may be idiopathic, or caused by autoimmune conditions or surgery, for example thyroidectomy. In pseudohypoparathyroidism, there is excessive PTH secretion because target tissues fail to respond to the hormone, producing a persistent hypocalcemia. This condition is more common in males than females and patients present with skeletal abnormalities including short stature, mental retardation, cataracts and testicular atrophy. 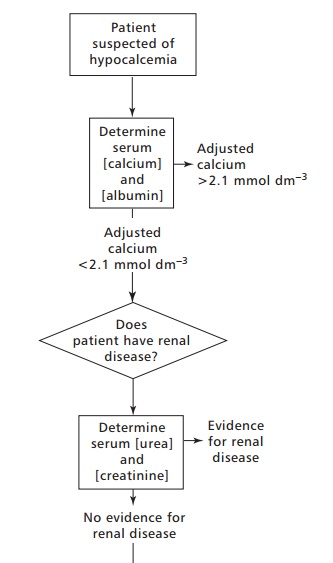 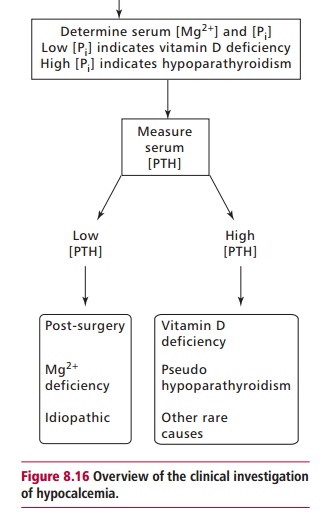