Magnesium is required to maintain the structures of ribosomes, nucleic acids and numerous proteins and acts as a cofactor for over 300 enzymes, including those involved in energy metabolism and protein synthesis.

Magnesium is required to maintain the structures of ribosomes, nucleic acids and numerous proteins and acts as a cofactor for over 300 enzymes, including those involved in energy metabolism and protein synthesis. It is also required for normal cell permeability and neuromuscular functions. The usual dietary intake of Mg2+ is about 15 mmol day–1 and approximately 30% of this is absorbed in the GIT, the rest is lost in the feces. The adult human body contains over 1200 mmol of Mg2+ (Figure 8.18). Approximately 750 mmol is found in bone and about 450 mmol in muscle and soft tissues. The ECF contains only 15 mmol. Approximately 55% of plasma Mg2+ occurs as free ionized Mg2+, 32% is protein-bound and 13% complexed with Pi or citrate. 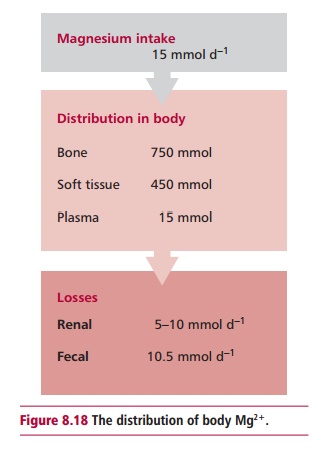 The kidneys lose 5 to10 mmol of Mg2+ daily but losses are adjusted to control Mg2+ homeostasis. An increased dietary intake of Mg2+ results in increased renal loss and vice versa. This is achieved principally by adjusting the reabsorption of Mg2+ by cells of the proximal tubules and loop of Henle. A number of factors influence the rate of excretion of Mg2+ including hypercalcemia and hypophosphatemia that decrease renal reabsorption and PTH, which stimulates renal retention.

The reference range for serum Mg2+ is 0.8–1.2 mmol dm–3. Hypo- and hypermagnesemia refer to concentrations below and above the reference range respectively. Note that measurements of the concentration of Mg2+ in plasma or serum are unreliable indicators of its body status since only 1% of body Mg2+ occurs in the ECF.

The clinical effects of hypomagnesemia are similar to those seen in hypo-calcemia and include tetany, muscle weakness, convulsions and cardiac arrhythmias. These effects are related to the role of Mg2+ in neuromuscular function. The causes of hypomagnesemia include decreased intake as in starvation , poorly managed parenteral nutrition or malabsorption. Increased losses of Mg2+ as in osmotic diuresis in diabetics , diuretic therapy, hyperaldosteronism and excessive losses from the GIT in prolonged diarrhea, GIT fistula and laxative abuse can also cause hypomagnesemia. The use of anticancer drugs , such as cisplatinum, can damage the kidneys and prevent the renal reabsorption of Mg2+. In alcoholism , hypomagnesemia is believed to occur due to increased renal excretion, inadequate dietary intake, vomiting and diarrhea.

In hypomagnesemia, the underlying cause should be treated wherever possible. Oral Mg2+ supplements may be adequate for mild cases but severe Mg2+ deficiency together with malabsorption may require intravenous infusions of Mg2+.