Some of the direct measurement instruments are

When the stylus is moved over the surface which is to be measured, the irregularities in the surface texture are measured and it is used to assess the surface finish of the work piece.

Any desired roughness parameter can be recorded.

3. Skilled operators are needed to operate.

In this the diamond stylus on the surface finish recorder is held by spring pressure against the surface of a lapped cylinder. The lapped cylinder is supported one side by probe and other side by rollers. The stylus is also attached to the body of the instrument by a leaf spring and its height is adjustable to enable the diamond to be positioned and the light spring steel arm is attached to the lapped cylinder. The spring arm has a diamond scriber at the end and smoked glass is rest  on the arm. 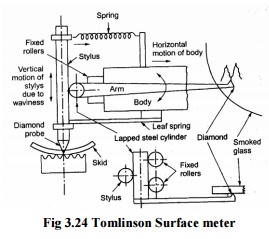 When measuring surface finish the body of the instrument is moved across the surface by a screw rotation. The vertical movement of the probe caused by the surface irregularities makes the horizontal lapped cylinder to roll. This rolling of lapped cylinder causes the movement of the arm. So this movement is induces the diamond scriber on smoked glass. Finally the movement of scriber together with horizontal movement produces a trace on the smoked glass plate and this trace is

magnified by an optical projector. 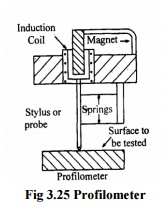 It is an indicating and recording instrument to measure roughness in microns. The main parts of the instrument are tracer and an amplifier. The stylus is mounted in the pickup and it consists of induction oil located in the magnet. When the stylus is moved on the surface to be tested, it is displaced up and down due to irregularities in the surface. This movement induces the induction coil to move in the direction of permanent magnet and produces a voltage. This is amplified and recorded.

It is working a carrier modulating principle and it is an accurate method comparing with the other methods. The main parts of this instrument is diamond stylus (0.002mm radius) and skid

The irregularities of the surface are traced by the stylus and the movement of the stylus is converted into changes in electric current.

On two legs of the E-shaped stamping there are coils for carrying an A.C. current and these coils form an oscillator. As the armature is pivoted about the central leg the movement of the stylus causes the air gap to vary and thus the amplitude is modulated. This modulation is again demodulated for the vertical displacement of the stylus. So this demodulated output is move the pen recorder to produce a numerical record and to make a direct numerical assessment.