Devices used for measurement of roundness

Devices used for measurement of roundness

2)  Circumferential conferring gauge => a shaft is confined in a ring gauge and rotated against a set indicator probe.

The measuring plungers are located 180° a part and the diameter is measured at several places. This method is suitable only when the specimen is elliptical or has an even number of lobes. Diametral check does not necessarily disclose effective size or roundness. This method is unreliable in determining roundness.

Fig. shows the principle of this method. It is useful for inspection of roundness in production. This method requires highly accurate master for each size part to be measured. The clearance between part and gauge is critical to reliability. This technique does not allow for the measurement of other related geometric characteristics, such as concentricity, flatness of shoulders etc. 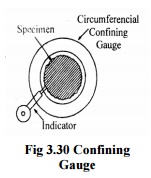 The shaft is inspected for roundness while mounted on center. In this case, reliability is dependent on many factors like angle of centers, alignment of centres, roundness and surface condition of the centres and centre holes and run out of piece. Out of straightness of the part will cause a doubling run out effect and appear to be roundness error.

The set up employed for assessing the circularity error by using V Block is shown in fig. 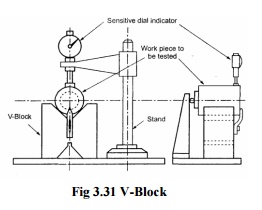 a) The circularity error is greatly by affected by the following factors.

(i)   If the circularity error is i\e, then it is possible that the indicator shows no variation.

(ii) Position of the instrument i.e. whether measured from top or bottom.

(iii) Number of lobes on the rotating part.

b)  The instrument position should be in the same vertical plane as the point of contact of the part with the V-block.

c) A leaf spring should always be kept below the indicator plunger and the surface of the part.

The fig. shows three probes with 120° spacing is very, useful for determining effective size they perform like a 60° V-block. 60° V-block will show no error for 5 a 7 lobes magnify the error for 3-lobed parts show partial error for randomly spaced lobes.