Dermatomyositis is a subset of polymyositis with distinctive skin changes.

Dermatomyositis is a subset of polymyositis with distinctive skin changes. There are adult and juvenile types (Table 10.2). The cause is unknown but an auto-immune mechanism seems likely. Autoantibodies to striated muscle are found. When starting after the age of 40, dermatomyositis may signal an internal malig-nancy. Presumably, the epitopes of some tumour anti-gens are so similar to those of muscle antigens that antibodies directed against the tumour cross-react with muscle cells and initiate the disease in a few adults with internal malignancy. Serological evidence for acute toxoplasmosis in polymyositis-dermato-myositis was found in one series.

The skin signs are characteristic. Typical patients have a faint lilac discoloration around their eyes (sometimes called ‘heliotrope’ because of the colour of the flower). This is associated with malar erythema and oedema (Fig. 10.6) and, sometimes, less striking erythema of the neck and presternal area. Most patients also develop lilac slightly atrophic papules over the knuckles of their fingers (Gottron’s papules), streaks of erythema over the extensor tendons of the hand, peri-ungual telangiectasia and ragged cuticles (Fig. 10.7). The skin signs usually appear at the same time as the muscle symptoms but, occasionally, appear months or even years earlier. Sometimes, the skin signs appear in isolation. Many, but not all, patients have weakness of proximal muscles. Climbing stairs, getting up from chairs and combing the hair become difficult. 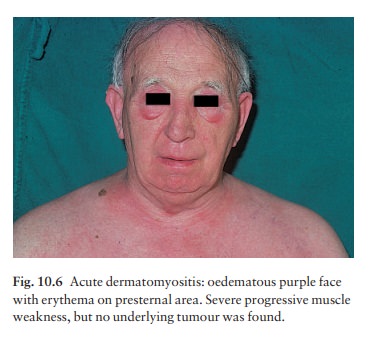 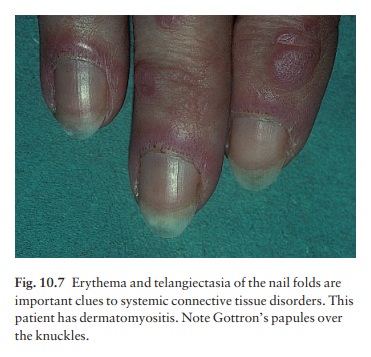 In children the disorder is often self-limiting, but in adults it may be prolonged and progressive. Raynaud’s phenomenon, arthralgia, dysphagia and calcinosis may follow. The rash may become scaly and, rarely, itchy; eventually that on the light-exposed areas and overly-ing involved muscles develops poikiloderma. Features of mixed connective disease  may develop. The presence of calcinosis suggests a good prognosis.

Myositis may lead to permanent weakness and immo-bility, and inflammation to contractures or cutaneous calcinosis. Some die from progessive and severe myopathy.

Other connective tissue disorders may look similar, particularly mixed connective tissue disease  and SLE. In LE, the finger lesions favour the skin between the knuckles whereas in dermatomyositis the knuckles are preferred. Toxoplasmosis may cause a dermatomyositis-like syndrome. Myopathy can be a side-effect of systemic steroids, so weakness is not always caused by the disease itself.

About 30% of adults with dermatomyositis also have an underlying malignancy. Their dermatomy-ositis coincides with the onset of the tumour and may improve if it is removed. Adult dermatomyositis or polymyositis therefore requires a search for such an underlying malignancy. The levels of muscle enzymes such as aldolase and creatinine phosphokinase (CPK) are often elevated. Electromyography (EMG) detects muscle abnormalities, and biopsy of an affected muscle shows inflammation and destruction. Sur-prisingly, the ESR is often normal and antinuclear antibodies may not be detected. Toxoplasmosis should be excluded by serology.

Systemic steroids, often in high doses (e.g. prednisolone mg/day for an average adult;), are the cornerstone of treatment and protect the muscles from destruction. A maintenance regimen may be needed for several years. Immunosuppressive agents, such as azathioprine, also help to control the condition and to reduce the high steroid dose. Cyclosporin  and methotrexate  have proved useful alternatives in stubborn cases. Maintenance treatment is adjusted according to clinical response and CPK level. As in SLE, intravenous gamma globulin infusions seem promising. Long-term and regular follow-up is necessary.