In the sixth century BCE, two great thinkers were born in China: Confucius and Lao-Tse.

In the sixth century BCE, two great thinkers were born in China: Confucius and Lao-Tse. They laid down the systems of morals and social behaviour for individuals and communities. But after their death, temples were built in their memory and the philosophy they taught was developed into a religion. Known as Confucianism and Taoism respectively, their books were held in great reverence in China. Confucianism exerted a big influe nce on not only the political class of China but also on the common people.

Confucius was born in the Shantung province of China in 551 BCE. He studied history, poetry, philosophy and music. He is the author of five important works: (1) The Book of Records, which is chiefly ethical, providing guidelines for the regulation of human society; (2) The Book of Odes, illustrating the sound principles of morality in songs; (3) The Book of Changes dealing with metaphysics; (4) The Spring and Autumn Annals, a code of political morality; and (5) The Book of History narrating the events and legends of the early religions of China. 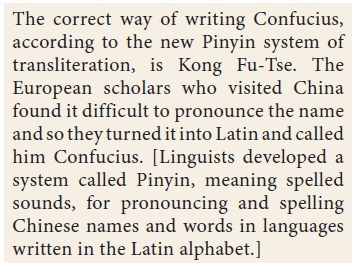 Confucius said that wisdom grows from the family, and that the foundation of society is the disciplined individual in an orderly family. The superior man, according to him, is not merely intelligent or scholarly, but his character should be exemplary. The superior man of Confucius 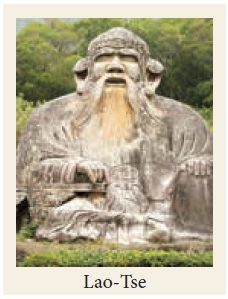 possesses three virtues: intelligence, courage and goodwill. Though Confucius insisted on children obeying parents and wife her husband, he also clearly proposed that “when the command is wrong a son should resist his father and a minister should resist the prince.” When asked about government, he said that there are three requisites for it: “That there should be sufficiency of food, sufficiency of military equipment and confidence of the people in their ruler.”

The philosophy of Confucius gave the Chinese people an awareness about their political rights. It also clearly listed the government’s duty towards the people. Confucius felt that the government should work with an ideal. In matters of national life, Confucius felt that the people in the nation are the actual and proper source of political sovereignty. He advised that the ruler must appoint persons of character in the government to govern the people impartially. Confucianism is often characterised as a system of social and ethical philosophy rather than as a religion.

Lao-Tse, the greatest of the pre-Confucian philosophers, was 53 years older than Confucius. Lao-Tse was born in 604 BCE. Disgusted with the intrigues of politicians and the prevailing corruption of his time, he left China to live in a peaceful abode. Lao-Tse wrote a book in two parts, running into 5,000 words. He then disappeared from the place and no one knew where he died. His book Tao Teh Ching is a guide to the conduct of life.

·        The cause of human unhappiness in the world is human selfishness. Selfishness creates unlimited human desires, which can never be satisfied.

·        In nature, all the things act in a natural way. The law of human conduct must correspond with nature.