3.       There is no chance of air leakage  pressure inside the furnace the is above atmospheric.

5.       The heat transfer efficiency will be increased.

3. Continuous air leakage is possible as as the pressure inside the furnace is less than atmosphere.

In a forced draught system, a blower is installed near the base of the boiler and air is forced to pass through the furnace, flues, economizer, air-preheater and to the stack. This draught system is known as positive draught system or forced draught system because the pressure and air is forced to flow through the system. The arrangement of the system is shown in figure. A stack or chimney is also in this system as shown in figure but its function is to discharge gases high in the atmosphere to prevent the contamination. It is not much significant for producing draught therefore height of the chimney may not be very much. 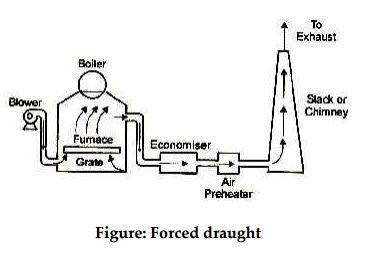 In this system, the blower is located near the base of the chimney instead of near the grate. The air is sucked in the system by reducing the pressure through the system below atmosphere. The induced draught fan sucks the burned gases from the furnace and the pressure inside the furnace is reduced below atmosphere and induces the atmospheric air to flow through the furnace. The action of the induced draught is similar to the action of the chimney. The draught produced is independent of the temperature of the hot gases therefore the gases may be  much heat as possible in air-preheater and an izer and air-preheater are incorporated in the hat the temperature of the gas handled by the em and its function is similar as mentioned in forced draught but total draught produced in induced draught system is the sum of the draughts produced by the fan and chimney. The arrangement of the system is shown in figure. 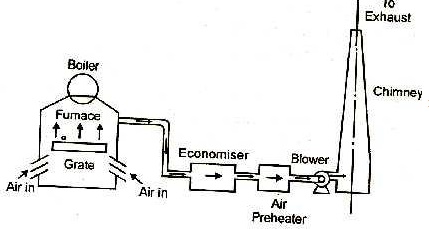