The commonly used ash discharge equipment is as follows:

In this system, ash from the furnace grate falls into a system of water possessing high velocity and is carried to the sumps. It is generally used in large power plants. Hydraulic system is of two types, namely, low pressure hydraulic system used for intermittent ash disposal figure. Figure shows hydraulic system. 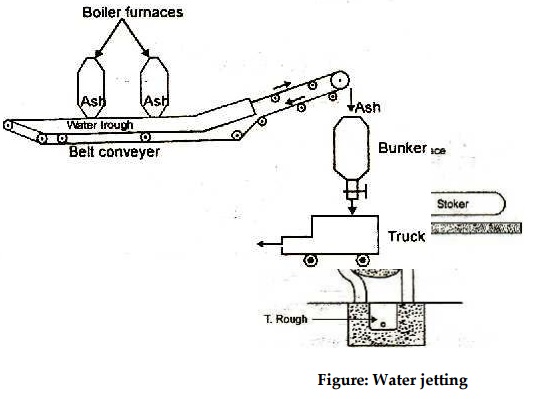 In this method water at sufficient pressure is used to take away the ash to sump. Where water and ash are separated. The ash is then transferred to the dump site in wagons, rail cars to trucks. The loading of ash may be through a belt conveyor, grab buckets. If there is an ash basement with ash hopper the ash can fall, directly in ash car or conveying system. 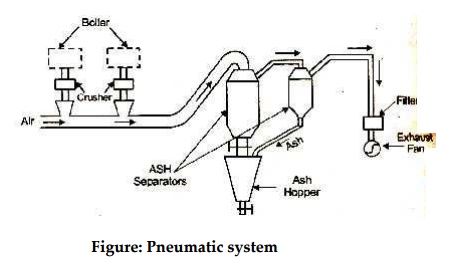 Water jetting of ash is shown in figure. In this method a low pressure jet of water coming out of quenching nozzle is used to cool the ash. The ash falls into trough and is then removed.

In this system ash from the boiler furnace outlet falls into a crusher where a lager ash particles are crushed to small sizes. The ash is then carried by a high velocity air or steam to the point of delivery. Air leaving the ash separator is passed through filter to remove dust etc. So that the exhauster handles clean air which will protect the blades of the exhauster. 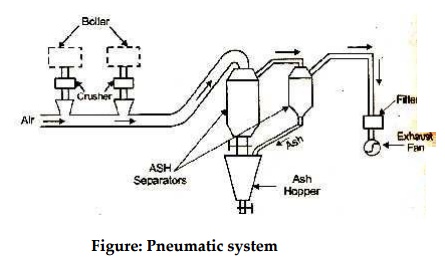 Figure shows a mechanical ash handling system. In this system ash cooled by water seal falls on the belt conveyor and is carried out continuously to the bunker. The ash is then removed to the dumping site from the ash banker with the help of trucks.