Questions · How would you interpret the ultrasound result? · What further examination, investigations or management would you like to perform or request?

A 23-year-old woman is referred by her general practitioner with vaginal bleeding. She noticed that there was blood on the toilet paper 2 days ago, and following this she has had bright red spotting intermittently. She has no pain and there are no urinary or bowel symptoms.

Her last menstrual period started 9 weeks and 6 days ago and she has a regular 31-day cycle. She had a positive home urine pregnancy test 3 weeks ago after she realized she had missed a period and was feeling very tired. This is her first pregnancy. She had been using condoms but with poor compliance, so the pregnancy was unplanned but she is now happy about it.

She is generally well, only having been admitted to hospital once in the past for an append- ectomy at the age of 17 years. She takes no medication, does not smoke and drinks min- imal alcohol. She denies any use of recreational drugs.

The woman is apyrexial. The blood pressure is 120/65 mmHg and heart rate 78/min. The abdomen is soft and non-tender with no palpable uterus or other masses. 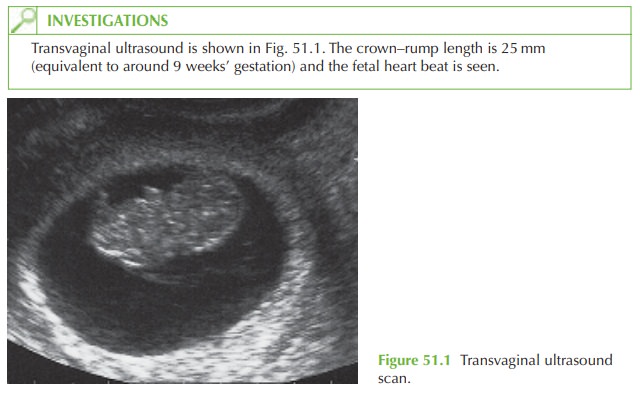 ·             What further examination, investigations or management would you like to perform or request?

The ultrasound scan shows a viable single intrauterine pregnancy. The crown–rump length is compatible with the gestational age by menstrual dates, especially as the woman reports a long menstrual cycle (3 days longer than normal, therefore gestational age would be 3 days less than the ‘normal’). Where there is a significant discrepancy with menstrual and ultrasound gestational age estimation (e.g. more than 7 days), one should consider the possibility of inaccurate reporting of the last menstrual period date, irregular cycles leading to inaccurate estimated ovulation date, or of a possible growth-retarded fetus which may possibly be destined to miscarry.

In this case, as the ultrasound is reassuring the diagnosis would be of a ‘threatened miscarriage’.

Figure 51.2 shows a three-dimensional image of the fetus, demonstrating the developing limbs and the physiological midgut herniation which occur at this developmental stage. 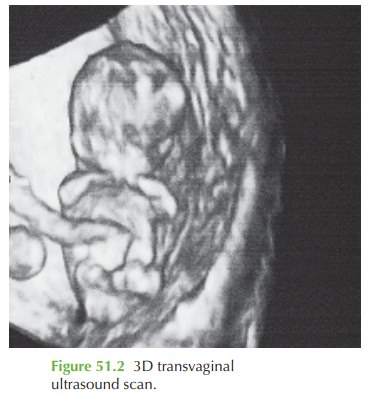 A speculum examination should be performed. The possible findings may be:

No further investigations are necessary at this stage – the amount of bleeding is unlikely to have caused anaemia. Rhesus status is irrelevant as anti-D immunoglobulin is only recommended with bleeding after 12 weeks’ gestation, where the uterus is instrumented or where an ectopic pregnancy is treated surgically.

Management in this case is simple reassurance. Available evidence suggests that the preg- nancy is at less than 5 per cent risk of miscarriage if the fetal heartbeat is normal and the

bleeding resolves. There is no evidence for progesterone, bedrest or avoidance of sexual intercourse with threatened miscarriage. Further assessment should be offered if the bleeding becomes heavier or recurs. Otherwise the woman’s next appointments are likely to be the antenatal midwife-booking visit and the 11–14-week ultrasound scan.