Questions · How can pregnancies be dated and what is the approximate gestational age for this pregnancy? · What further investigations would you like to do to confirm this? · Why is correct early pregnancy dating important?

A woman is referred from the general practitioner for pregnancy dating. She had a posi- tive pregnancy test 3 days ago after she realized that she had missed a period. In the past she had had regular cycles bleeding for 5 days every 28 days. However she had been tak- ing the combined oral contraceptive pill (COCP) for the last 6 years and stopped only 10 weeks ago. She had a withdrawal bleed at the end of the last packet, followed by an apparently normal period 5 weeks later. She has had no other irregular bleeding or any abdominal pain. She has had regular intercourse throughout the time since she stopped her COCP and is pleased now to be pregnant. 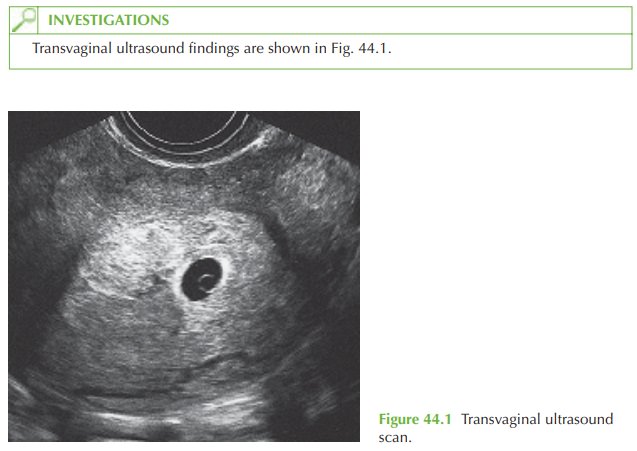 ·             How can pregnancies be dated and what is the approximate gestational age for this pregnancy?

The ultrasound shows an intrauterine gestation sac and a yolk sac, so in this case the preg- nancy is approximately 5 weeks’ gestation. This should be confirmed by re-scan (after at least 2 weeks) when a fetal pole will be visible and crown–rump length can be measured. The importance of accurate dating is:

·              accurate gestational age estimation for cases of delivery at the borderline of viability (e.g. preterm delivery at 22–24 weeks)