Questions · What is the diagnosis? · What further management is indicated?

A 41-year-old woman is seen in the early pregnancy unit because of vaginal bleeding. She is gravida 4 para 2 having had two previous normal vaginal deliveries followed by a miscarriage. She has a regular 28-day menstrual cycle and her last period started 9 weeks ago. She had slight vaginal bleeding two weeks ago and on ultrasound scan an early intrauterine pregnancy had been visualized with gestational sac of 18 × 12 × 22 mm diameter and a yolk sac visualized of 4 × 5 × 5 mm. No fetus was visualized. She was given an appointment for a repeat ultrasound.

Four days ago her bleeding became very heavy and she passed large clots which she described as ‘like liver’. She developed severe abdominal pain which lasted for about 4 h, and since then the bleeding has become very light and she is now pain free.

She has normal appetite and no nausea or vomiting. She has no urinary or bowel symptoms.

She appears well and is apyrexial. There are no signs of anaemia. The heart rate is 82/min and blood pressure is 132/78 mmHg. The abdomen is soft and mildly tender suprapubi- cally. Speculum shows the cervix is closed with a small amount of old blood in the vagina. There is slight uterine tenderness on bimanual palpation and the uterus feels normal size, anteverted and mobile, with no adnexal tenderness or cervical excitation. 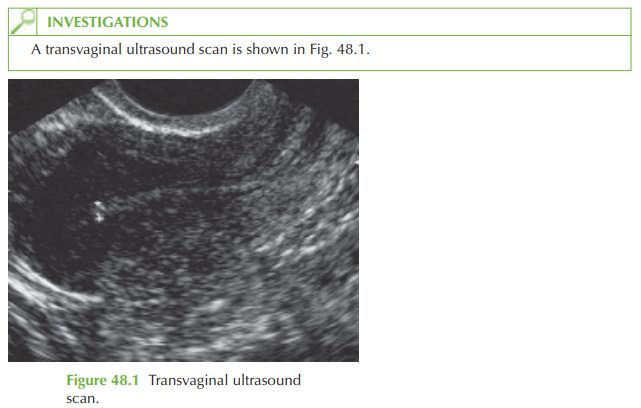 The ultrasound image shows a longitudinal view of the uterus with a thin homogenous endometrium and no evidence of a gestation sac or retained products of conception. As we know from the previous report that there was previously an intrauterine pregnancy, we can conclude that this is a complete miscarriage. If a previous ultrasound had not been available we would need to treat the case as a pregnancy of unknown location and moni- tor serial serum HCG.

No further management is needed as the miscarriage is complete and there are no signs of retained products of conception, or any suggestion of sepsis. Anti-D is not needed even if the woman is Rhesus negative as the pregnancy is less than 12 weeks’ gestation.

Counselling is the most important part of this consultation, as explained in case 45.

There is no clear evidence that a longer interpregnancy interval improves the outcome in future pregnancies, and the couple should be informed that they may try and conceive whenever they choose. However, it may be advisable to wait until after the next menstrual period (usually 4–6 weeks after a miscarriage) in order to date the pregnancy.

Reassurance scans are helpful in future pregnancies and may improve outcome. In view of the two consecutive losses, reassurance ultrasound at 7 weeks and then at intervals until the 11–14-week scan would be ideal.