Questions · What is the likely diagnosis and differential diagnosis? · What would one expect to see at scan in this woman if the pregnancy was normal? · How would you manage the patient?

A 36-year-old woman presents with vaginal bleeding at 8 weeks 3 days’ gestation. She has never been pregnant before. Bright red ‘spotting’ commenced 7 days ago, which she thought was normal in early pregnancy. However since then the bleeding is now almost as heavy as a period. There are no clots. She has no abdominal pain. Systemically she has felt nausea for 3 weeks and has vomited occasionally. She had large-loop excision of the transformation zone (LLETZ) treatment after an abnormal smear 6 years ago. Since then all smears have been normal. There is no other significant gynaecological history. She has regular periods bleeding for 5 days every 28 days, and has never had any known sexually transmitted infections. In the past she used condoms for contraception.

The heart rate is 68/min and blood pressure is 108/70 mmHg. The abdomen is soft and non-tender. Speculum reveals a normal closed cervix with a small amount of fresh blood coming from the cervical canal. Bimanually the uterus feels bulky and soft, approximately 10 weeks in size. There is no cervical excitation or adnexal tenderness. 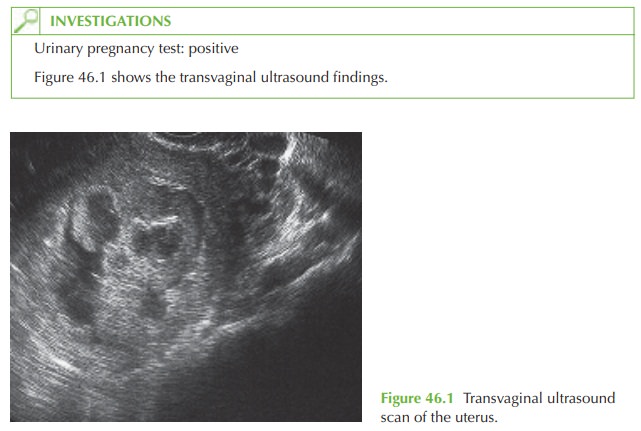 The ultrasound scan shows a mixed echogenicity appearance in the uterus, typical of a complete hydatidiform mole (molar pregnancy, part of the spectrum of gestational tro- phoblastic disease). There is no recognizable gestational sac or fetus.

This appearance may also be seen occasionally in pregnancies where early fetal demise has occurred but the sac has not been expelled (delayed miscarriage) resulting in cystic degeneration of the placenta.

The incidence of hydatidiform mole (also known as gestational trophoblastic disease) is approximately 1 in 714. It generally presents with painless vaginal bleeding though it may be diagnosed as an incidental finding when ultrasound is performed for another indication. The classical associations with hyperemesis, thyrotoxicosis or pre-eclampsia are rarely seen in the developed world where diagnosis is generally made in the first trimester.

The normal findings at 8 weeks would be a fetus of approximately 18 mm, with a positive fetal heart beat. The yolk sac would still be visible and the amniotic sac would also be seen. The fetus would be beginning to develop visible arm and limb buds and fetal move- ment may be seen.

Figure 46.2 shows a transvaginal image of a normal 8-week gestation sac and fetus. 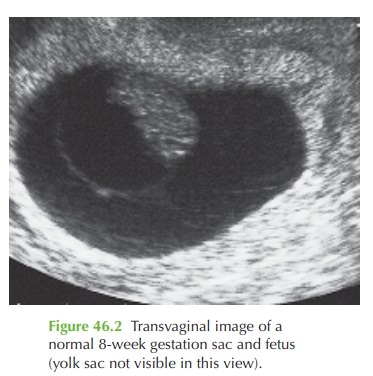 The management for suspected molar pregnancy is always evacuation of retained prod- ucts of conception (ERPC), with urgent histological examination of the tissue.

Once diagnosis is confirmed by histology, any woman with a confirmed partial or com- plete mole should be referred to a specialist gestational trophoblastic disease centre (in the UK in Sheffield, Dundee and Charing Cross Hospital) for follow-up of human chorionic gonadotrophin (HCG) levels. Women with persistently raised HCG levels are offered chemotherapy to destroy the persistent trophoblastic tissue and minimize the chance of development of choriocarcinoma.

Most women however do not require chemotherapy as the HCG becomes negative within a short period of time. These women should be advised:

·              they should have HCG monitoring after any subsequent pregnancy (whether live birth, fetal loss or termination)

·              the combined oral contraceptive pill may safely be used once HCG has returned to normal (previous advice was to wait for 6 months).