Viruses are obligate intracellular parasites; their replication depends primarily on synthetic processes of the host cell.

Viruses are obligate intracellular parasites; their replication depends primarily on synthetic processes of the host cell. Therefore, to be effective, antiviral agents must either block viral entry into or exit from the cell or be active inside the host cell. As a corollary, non-selective inhibitors of virus replication may interfere with host cell function and result in toxicity.

Progress in antiviral chemotherapy began in the early 1950s, when the search for anticancer drugs generated several new compounds capable of inhibiting viral DNA synthesis. The two first-generation antiviral agents, 5-iododeoxyuridine and trifluorothymidine, had poor specificity (ie, they inhibited host cell DNA as well as viral DNA) that rendered them too toxic for systemic use. However, both agents are effective when used topically for the treatment of herpes keratitis.

Knowledge of the mechanisms of viral replication has provided insights into critical steps in the viral life cycle that can serve as potential targets for antiviral therapy. Recent research has focused on identifying agents with greater selectivity, higher potency, in vivo stability, and reduced toxicity. Antiviral therapy is now avail-able for herpesviruses, hepatitis C virus (HCV), hepatitis B virus (HBV), papillomavirus, influenza, and human immunodeficiency virus (HIV). Antiviral drugs share the common property of being virustatic; they are active only against replicating viruses and do not affect latent virus. Whereas some infections require monotherapy for brief periods of time (eg, acyclovir for herpes simplex virus), others require dual therapy for prolonged periods of time (inter-feron alfa/ribavirin for HCV), whereas still others require multiple drug therapy for indefinite periods (HIV). In chronic illnesses such as viral hepatitis and HIV infection, potent inhibition of viral rep-lication is crucial in limiting the extent of systemic damage. 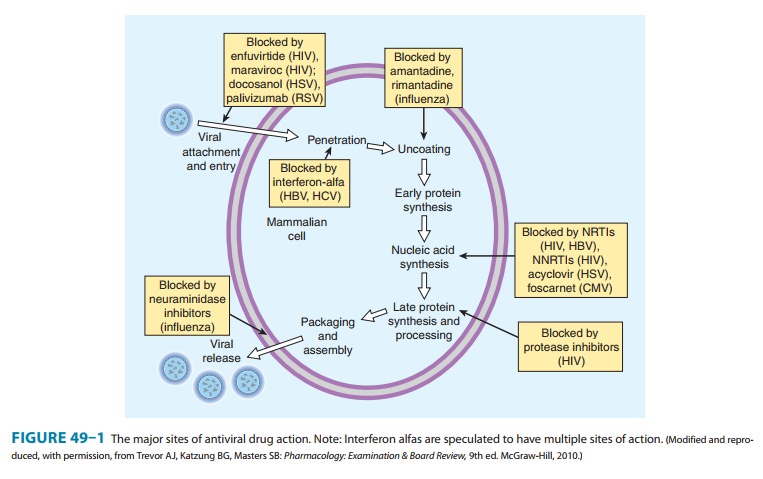 Viral replication requires several steps (Figure 49–1): (1) attach-ment of the virus to receptors on the host cell surface; (2) entry of the virus through the host cell membrane; (3) uncoating of viral nucleic acid; (4) synthesis of early regulatory proteins, eg, nucleic acid polymerases; (5) synthesis of new viral RNA or DNA; (6) syn-thesis of late, structural proteins; (7) assembly (maturation) of viral particles; and (8) release from the cell. Antiviral agents can poten-tially target any of these steps.

A 35-year-old white woman who recently tested seropositive for both HIV and hepatitis B virus surface antigen is referred for evaluation. She is feeling well overall but reports a 25-pack-year smoking history. She drinks 3–4 beers per week and has no known medication allergies. She has a history of heroin use and is currently receiving methadone. Physical examination reveals normal vital signs and no abnormalities. White blood cell count is 5800 cells/mm 3 with a normal differential, hemoglobin is 11.8 g/dL, all liver function tests are within normal limits, CD4 cell count is 278 cells/mm3, and viral load (HIV RNA) is 110,000 copies/ mL. What other laboratory tests should be ordered? Which antiretroviral medications would you begin?

Combination antiviral therapy against both HIV and hepatitis B virus (HBV) is indicated in this patient, given the high viral load and low CD4 cell count. However, the use of methadone and possibly excessive alcohol consumption necessitate cau-tion. Tenofovir and emtricitabine (two nucleoside/nucleotide reverse transcriptase inhibitors) would be a potentially excel-lent choice as components of an initial regimen, since both are active against HIV-1 and HBV, do not interact with methadone, and are available in a once-daily, fixed-dose combination. Efavirenz, a nonnucleoside reverse tran-scriptase inhibitor, could be added and still maintain a once-daily regimen. Prior to initiation of this regimen, renal function should be checked, and a bone mineral density test should be considered. Pregnancy should be ruled out, and the patient should be counseled that efavirenz should not be taken during pregnancy. The potential for lowered metha-done levels with efavirenz necessitates close monitoring and possibly an increased dose of methadone.