Three oral nucleoside analogs are licensed for the treatment of HSV and VZV infections: acyclovir, valacyclovir, and famciclovir.

Three oral nucleoside analogs are licensed for the treatment of HSV and VZV infections: acyclovir, valacyclovir, and famciclovir. They have similar mechanisms of action and comparable indications for clinical use; all are well tolerated. Acyclovir has been the most exten-sively studied; it was licensed first and is the only one of the three that is available for intravenous use in the United States. Comparative trials have demonstrated similar efficacies of these three agents for the treatment of HSV but modest superiority of famciclovir and valacyclovir for the treatment of herpes zoster infections

Acyclovir (Figure 49–2) is an acyclic guanosine derivative with clinical activity against HSV-1, HSV-2, and VZV, but it is approx-imately 10 times more potent against HSV-1 and HSV-2 than against VZV. In vitro activity against Epstein-Barr virus (EBV), cytomegalovirus (CMV), and human herpesvirus-6 (HHV-6) is present but weaker. 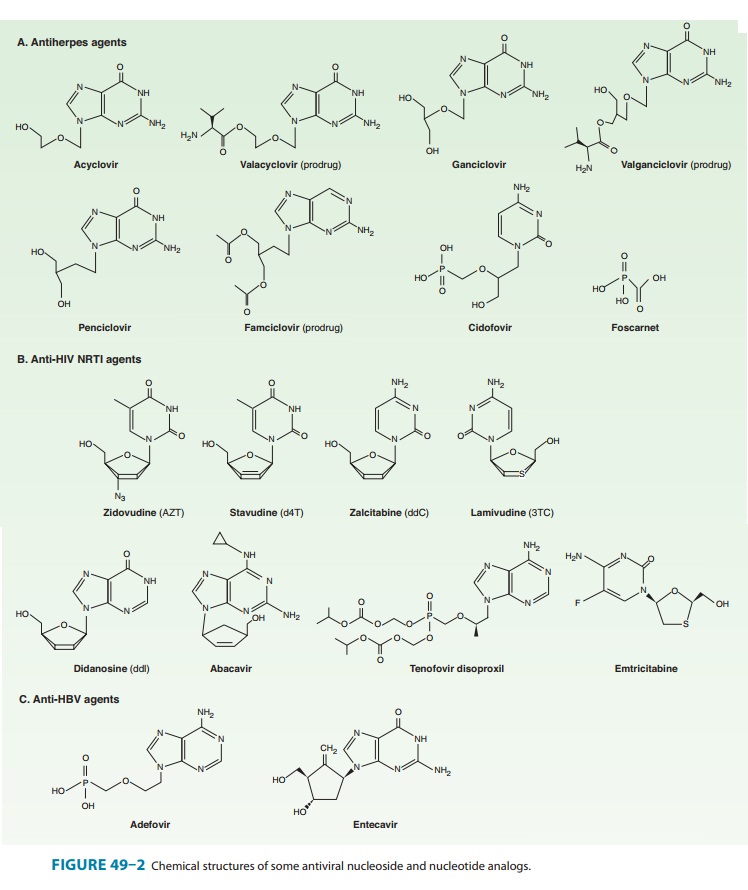 Acyclovir requires three phosphorylation steps for activation. It is converted first to the monophosphate derivative by the virus-specified thymidine kinase and then to the di- and triphosphate compounds by host cell enzymes (Figure 49–3). Because it requires the viral kinase for initial phosphorylation, acyclovir is selectively activated—and the active metabolite accumulates— only in infected cells. Acyclovir triphosphate inhibits viral DNA synthesis by two mechanisms: competition with deoxyGTP for the viral DNA polymerase, resulting in binding to the DNA tem-plate as an irreversible complex; and chain termination following incorporation into the viral DNA. 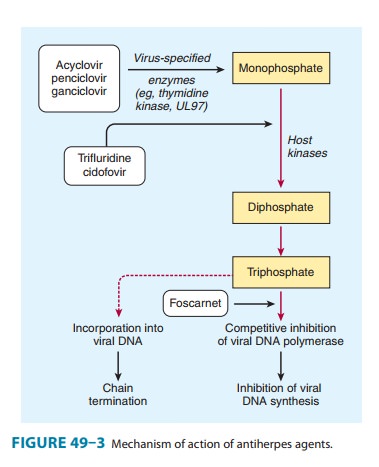 The bioavailability of oral acyclovir is low (15–20%) and is unaffected by food. An intravenous formulation is available. Topical formulations produce high concentrations in herpetic lesions, but systemic concentrations are undetectable by this route.

Acyclovir diffuses readily into most  tissues and body  fluids. Cerebrospinal fluid concentrations are 20–50% of serum values. 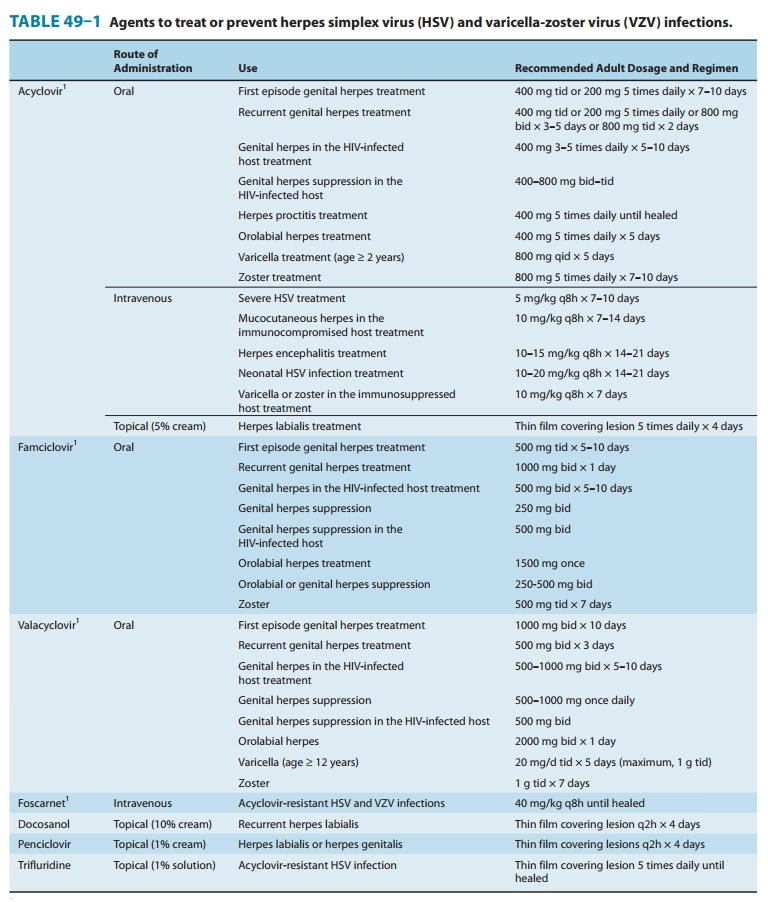 frequency of symptomatic recurrences and of asymptomatic viral shedding, thus decreasing the rate of sexual transmission. However, outbreaks may resume upon discontinuation of suppressive acyclovir. Oral acyclovir is only modestly beneficial in recurrent herpes labialis. In contrast, acyclovir therapy significantly decreases the total number of lesions, duration of symptoms, and viral shed-ding in patients with varicella (if begun within 24 hours after the onset of rash) or cutaneous zoster (if begun within 72 hours). However, because VZV is less susceptible to acyclovir than HSV, higher doses are required (Table 49–1). When given prophylacti-cally to patients undergoing organ transplantation, oral or intrave-nous acyclovir prevents reactivation of HSV infection. Evidence from recent clinical trials suggests that the use of daily acyclovir (400 mg twice daily) may reduce the plasma viral load of HIV-1 and the risk of HIV-associated disease progression in individuals dually infected with HSV-2 and HIV-1.

Topical acyclovir cream is substantially less effective than oral therapy for primary HSV infection. It is of no benefit in treating recurrent genital herpes.

Resistance to acyclovir can develop in HSV or VZV through alteration in either the viral thymidine kinase or the DNA polymerase, and clinically resistant infections have been reported in immunocompromised hosts. Most clinical isolates are resistant on the basis of deficient thymidine kinase activity and thus are cross-resistant to valacyclovir, famciclovir, and ganciclovir. Agents such as foscarnet, cidofovir, and trifluridine do not require activation by viral thymidine kinase and thus have preserved activity against the most prevalent acyclovir-resistant strains (Figure 49–3).

Acyclovir is generally well tolerated. Nausea, diarrhea, and headache have occasionally been reported. Intravenous infusion may be associated with reversible renal toxicity (ie, crystalline nephropathy or interstitial nephritis) or neurologic effects (eg, tremors, delirium, seizures). However, these are uncommon with adequate hydration and avoidance of rapid infusion rates. High doses of acyclovir cause chromosomal damage and testicular atrophy in rats, but there has been no evidence of teratogenicity, reduction in sperm production, or cytogenetic alterations in peripheral blood lymphocytes in patients receiving daily suppres-sion of genital herpes for more than 10 years. A recent study found no evidence of increased birth defects in 1150 infants who were exposed to acyclovir during the first trimester.

Concurrent use of nephrotoxic agents may enhance the poten-tial for nephrotoxicity. Probenecid and cimetidine decrease acyclo-vir clearance and increase exposure. Somnolence and lethargy may occur in patients receiving concomitant zidovudine and acyclovir.

Valacyclovir is the L-valyl ester of acyclovir (Figure 49–2). It is rapidly converted to acyclovir after oral administration via first-pass enzymatic hydrolysis in the liver and intestine, resulting in serum levels that are three to five times greater than those achieved with oral acyclovir and approximate those achieved with intrave-nous acyclovir. Oral bioavailability is 54–70%, and cerebrospinal fluid levels are about 50% of those in serum. Elimination half-life is 2.5–3.3 hours.

Valacyclovir is generally well tolerated, although nausea, headache, vomiting, or rash occasionally occur. At high doses, confusion, hallucinations, and seizures have been reported. AIDS patients who received high-dosage valacyclovir chronically (ie, 8 g/d) had an increased incidence of gastrointestinal intoler-ance as well as thrombotic thrombocytopenic purpura and hemolytic-uremic syndrome; this dose has also been associated with confusion and hallucinations in transplant patients. In a recent study, there was no evidence of increased birth defects in 181 infants who were exposed to valacyclovir during the first trimester.

Famciclovir is the diacetyl ester prodrug of 6-deoxypenciclovir, an acyclic guanosine analog (Figure 49–2). After oral administration, famciclovir is rapidly deacetylated and oxidized by first-pass metabo-lism to penciclovir. It is active in vitro against HSV-1, HSV-2, VZV, EBV, and HBV. As with acyclovir, activation by phosphorylation is catalyzed by the virus-specified thymidine kinase in infected cells, followed by competitive inhibition of the viral DNA polymerase to block DNA synthesis. Unlike acyclovir, however, penciclovir does not cause chain termination. Penciclovir triphosphate has lower affinity for the viral DNA polymerase than acyclovir triphosphate, but it achieves higher intracellular concentrations. The most com-monly encountered clinical mutants of HSV are thymidine kinase-deficient; these are cross-resistant to acyclovir and famciclovir.

Oral famciclovir is generally well tolerated, although headache, nausea, or diarrhea may occur. As with acyclovir, testicular toxicity has been demonstrated in animals receiving repeated doses. However, men receiving daily famciclovir (250 mg every 12 hours) for 18 weeks had no changes in sperm morphology or motility. In a recent study, there was no evidence of increased birth defects in 32 infants who were exposed to famciclovir during the first trimes-ter. The incidence of mammary adenocarcinoma was increased in female rats receiving famciclovir for 2 years.

The guanosine analog penciclovir, the active metabolite of famci-clovir, is available for topical use. Penciclovir cream (1%) shortens the duration of recurrent herpes labialis or genitalis (Table 49–1). When applied within 1 hour of the onset of prodromal symptoms and continued every 2 hours during waking hours for 4 days, median time until healing was shortened by 17 hours compared with placebo. Adverse effects are uncommon, although applica-tion site reactions occur in about 1% of patients.

Docosanol is a saturated 22-carbon aliphatic alcohol that inhibits fusion between the plasma membrane and the HSV envelope, thereby preventing viral entry into cells and subsequent viralreplication. Topical docosanol 10% cream is available without a prescription; application site reactions occur in approximately 2% of patients. When applied within 12 hours of the onset of prodromal symptoms, five times daily, median healing time was shortened by 18 hours compared with placebo in recurrent orolabial herpes.

Trifluridine (trifluorothymidine) is a fluorinated pyrimidine nucleoside that inhibits viral DNA synthesis in HSV-1, HSV-2, CMV, vaccinia, and some adenoviruses. It is phosphorylated intra-cellularly by host cell enzymes, and then competes with thymidine triphosphate for incorporation by the viral DNA polymerase (Figure 49–3). Incorporation of trifluridine triphosphate into both viral and host DNA prevents its systemic use. Application of a 1% solution is effective in treating keratoconjunctivitis and recurrent epithelial keratitis due to HSV-1 or HSV-2. Cutaneous application of trifluridine solution, alone or in combination with interferon alfa, has been used successfully in the treatment of acyclovir-resistant HSV infections.

Valomaciclovir is an inhibitor of the viral DNA polymerase; it is currently under clinical evaluation for the treatment of patients with acute VZV infection (shingles) and acute EBV infection (infectious mononucleosis).