Even if infections occur and toxins are secreted by the invading bacteria, it may be possible to protect the patient against the toxins.

Even if infections occur and toxins are secreted by the invading bacteria, it may be possible to protect the patient against the toxins. Traditional antitoxin treatment has relied on antibodies against bacterial toxins. However, new geneoriented approaches are emerging.

One approach relies on dominant-negative mutations in the binding subunit of the toxin. Defective mutations typically result in proteins that are inactive. However, occasional mutations give rise to proteins that not only are inactive themselves, but interfere with the functional version of the protein. The presence of such a mutation in the same cell as the wild-type version of the gene results in absence of activity—hence the term dominant-negative .

The mechanism usually involves the binding of a defective protein subunit to functional subunits resulting in a complex that is inactive overall. Consequently, most dominantnegative mutations affect proteins with multiple subunits. The multisubunit B proteins of A and B toxins such as cholera toxin and anthrax toxin are good examples. Dominant-negative mutations have been deliberately isolated in the B protein (i.e., the protective antigen, PA) of anthrax toxin. Mixing mutant subunits with active ones resulted in the assembly of inactive heptamers that bind the lethal or edema factor proteins (i.e., the A subunits) but cannot transport them into target cells ( Fig. 21.11 ). Treatment with the dominant-negative PA protein protected both cultured human cells and whole mice or rats from death by lethal levels of anthrax toxin.

Another approach is the use of phage display  to isolate nonnatural peptides that bind to bacterial toxins. Such peptides typically bind rather weakly to single proteins. 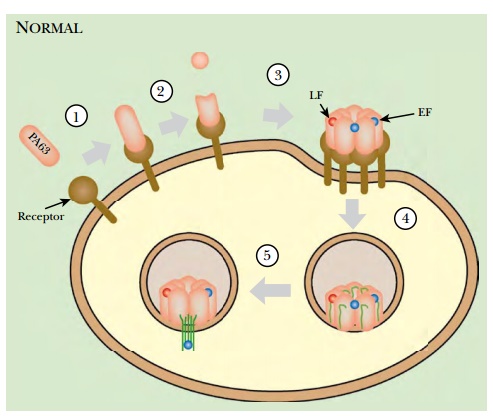 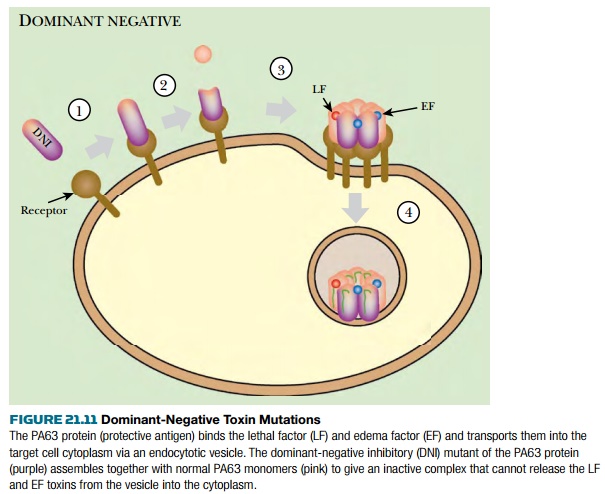 However, if several copies of the peptide are attached to a flexible backbone, this gives what is known as a polyvalent inhibitor . Binding to multiple target proteins will occur, which results in massively increased overall binding affinity. As discussed earlier, for this to work, the target must be a multisubunit protein such as the heptameric PA protein of anthrax toxin. Polyvalent peptide inhibitors with a polyacrylamide backbone have proven successful in protecting animals against anthrax toxin.