The cholera bacterium, Vibrio cholerae , does not invade the tissues of the host. It attaches to the exterior of cells lining the small intestine and stays there.

The cholera bacterium, Vibrio cholerae , does not invade the tissues of the host. It attaches to the exterior of cells lining the small intestine and stays there. The damage is due to the secretion of cholera toxin. This attacks intestinal epithelial cells, causing them to lose sodium ions and then water into the intestinal tract. The clinical  symptoms of cholera are loss of body fluids by massive diarrhea and subsequent death by dehydration.

The virulence proteins of Vibrio cholerae include cholera toxin as well as both pilus-borne and cell-surface adhesins for binding to intestinal cells. The genes for cholera toxin are carried by the CTXphi filamentous bacteriophage that lysogenizes Vibrio cholerae. Synthesis of both adhesins and toxin is co-regulated by the ToxR protein found in the bacterial inner membrane. This senses whether the bacterium is inside an animal intestine (temperature, pH, and bile salts are all involved) and activates the virulence genes accordingly ( Fig. 21.7 ). The internal domain of ToxR protein binds directly to the promoters of these genes. 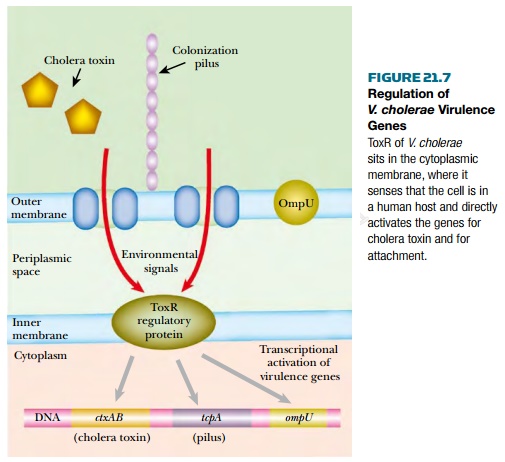 Cholera toxin consists of two proteins, A and B, encoded by the ctxAB genes ( Fig. 21.8 ). The original A protein is split by a protease to give A1 (23.5 kDa) and A2 (5.5 kDa), which remain linked by a single disulfide bond. Five B proteins (11.6 kDa) form a ringlike structure. The A1-S-S-A2 protein protrudes through the ring of five B-subunits. Cholera toxin binds to a glycolipid, known as ganglioside GM1 , in eukaryotic cell membranes. Each B subunit binds to the galactose end of a ganglioside molecule. After binding of the A1A2/B 5 complex to the cytoplasmic membrane, A1 is released from A2 by reduction of the disulfide bond. A1 then enters the cell. Free B protein protects eukaryotic cells against toxin by competing for GM1 binding sites. After entering the intestinal cell, cholera toxin splits NAD into nicotinamide and ADP-ribose, which is then used to ADP-ribosylate target molecules. Cholera toxin A1 protein can actually ADP-ribosylate a variety of acceptors, including free arginine and its derivatives as well as many proteins. A1 protein ADP-ribosylates itself, increasing its activity by 50%. The true in vivolethal target is a G protein involved in regulation of adenylate cyclase ( Fig. 21.9 ). 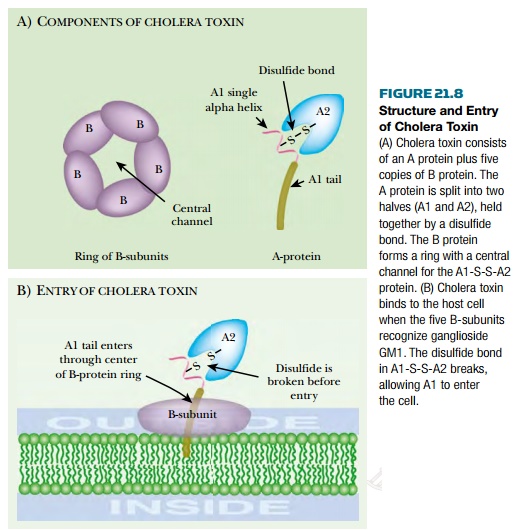 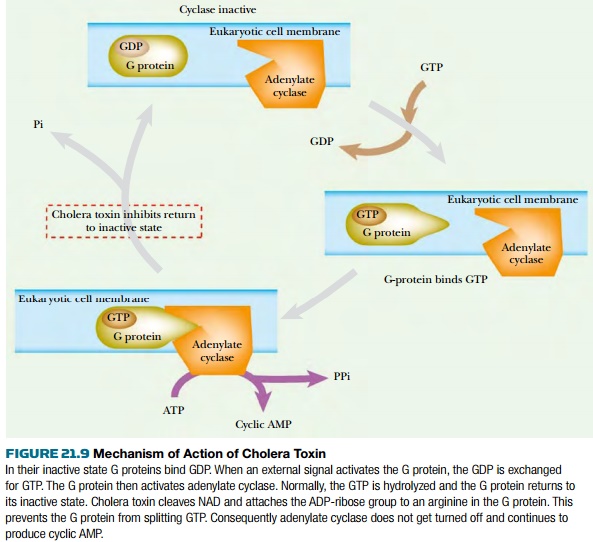