In addition to invasion and survival, many pathogenic bacteria also mount aggressive attacks against eukaryotic cells by making toxins.

In addition to invasion and survival, many pathogenic bacteria also mount aggressive attacks against eukaryotic cells by making toxins. In its broadest sense, the term toxin includes any molecule that damages eukaryotic cells. Some toxic effects may be regarded as “accidental,” whereas others are deliberate. For example, bacterial endotoxin is actually the lipid A component of lipopolysaccharide (LPS) that forms part of the outer membrane of gramnegative bacteria. If such bacteria are killed by the immune system, their cell walls will disintegrate and release LPS. The CD14 receptor on immune cells binds the LPS, and this triggers the release of cytokines. Simultaneous destruction of many bacteria will release large amounts of LPS and may result in septic shock.

Nonetheless, most pathogenic bacteria make one or more toxins that are designed to deliberately kill or damage the cells of their host. Because these are secreted from still-living bacteria, they are known as exotoxins . Most bacterial exotoxins are proteins, and they may be subdivided into three groups based on their site of action:

(a) Type I toxins do not enter the target cell. They trigger a harmful response by binding to a receptor on the cell surface. For example, heat-stable toxin a (STa) is made by some pathogenic strains of E. coli that cause diarrhea. STa is a hormone analog that binds to guanylate cyclase in the animal cell membrane, causing overproduction of cyclic GMP.

(b) Type II toxins act on the cell membrane of the target cell. Some degrade membrane lipids, and others create pores in the membrane. For example, hemolysin A is made by some pathogenic strains of E. coli that cause kidney damage. Hemolysin A was named for its ability to lyse red blood cells, but it disrupts the membranes of many other types of animal cells also.

(c) Type III toxins enter the target cell. They consist of a toxic factor (A-protein) together with a delivery system (B-protein). The A (“active”) and B (“binding”) proteins may be separate molecules or may be different domains of a single protein. Sometimes the delivery system consists of multiple B-subunits and, conversely, cases are known where multiple A-proteins share the same delivery system ( Table 21.1 ). These toxins are the most interesting from a molecular viewpoint, and we will discuss a few selected examples in more detail. 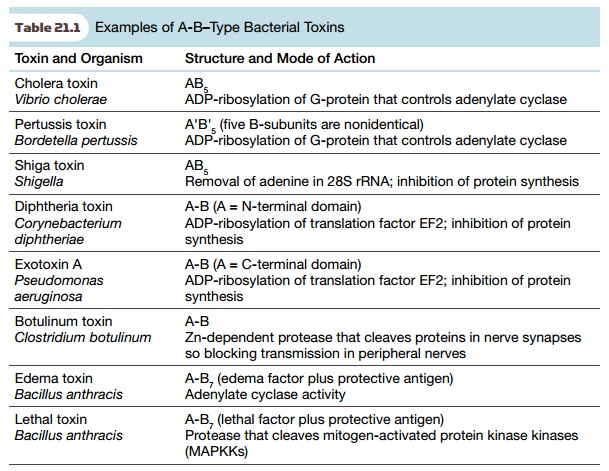