A large family of toxins hydrolyzes the cofactor NAD to nicotinamide and ADP-ribose.

A large family of toxins hydrolyzes the cofactor NAD to nicotinamide and ADP-ribose. The toxin then transfers the ADP-ribose fragment to an acceptor molecule, usually a protein that binds GTP. The target protein is locked into its GTP-binding conformation and cannot perform its normal role ( Fig. 21.6 ). Both cholera toxin and diphtheria toxin work by ADP-ribosylation , although the targets are different. Cholera toxin inactivates the G protein that controls adenylate cyclase in animal cells, whereas diphtheria toxin attacks elongation factor EF-2, a translation factor required for protein synthesis in eukaryotic cells. It was originally thought that the toxic effect of such NAD-using toxins was merely due to destruction of NAD. Although high levels of toxin will indeed hydrolyze all the NAD in the cell, the true lethal effect occurs at much lower toxin levels and is due to the ADP-ribosylation of target proteins. 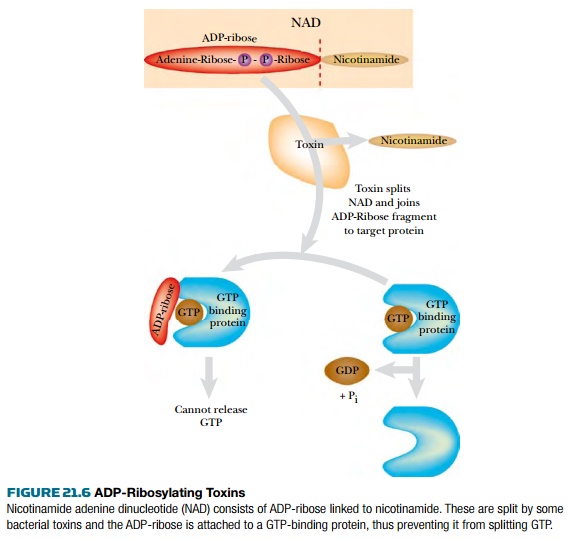 The genes for cholera toxin and diphtheria toxin are not part of the bacteria genome. Rather, the genes are carried on lysogenic viruses whose DNA is integrated into the bacterial chromosome. Only bacteria that carry the bacteriophage produce toxin, whereas those that lack it are nonpathogenic.

Certain other bacteriophages are known to possess enzymes that use NAD to ADP-ribosylate proteins of their bacterial hosts. Usually several bacterial proteins are modified, so which is the intended target is often uncertain. The blockade of key cellular enzymes may cripple host metabolism. A more sophisticated effect of ADP-ribosylation is the modification of host DNA or RNA polymerases to change their specificity. Examples include bacteriophage T4, which ADP-ribosylates the RNA polymerase of itshost, E. coli . The RNA polymerase thereupon loses much of its ability to transcribe E. coli genes but still works well with T4 genes. Like the targets of cholera and diphtheria toxins, RNA polymerase also binds GTP, although admittedly as just one of several alternative nucleotides.