Virulence Genes Are Often Found on Mobile Segments of DNA

Many infectious diseases are caused by bacterial invasion of the human body. Some pathogenic bacteria penetrate the interior of host cells, whereas others remain outside and inhabit extracellular spaces.

VIRULENCE GENES ARE OFTEN FOUND ON MOBILE SEGMENTS OF DNA

Many infectious diseases are caused by bacterial invasion of the human body. Some pathogenic bacteria penetrate the interior of host cells, whereas others remain outside and inhabit extracellular spaces. The molecular mechanisms involved in infectious disease vary greatly in detail. Nonetheless, invading microorganisms face similar problems and so share many of the same general abilities. Properties that allow microorganisms to cause infections are called virulence factors and may be subdivided into three main groups: those required for invasion of the host, those for survival inside the host, and those for aggression against the host. 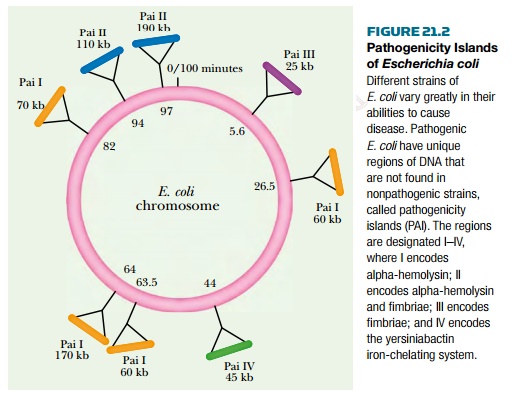 The blocks of DNA encoding virulence factors are often mobile. In some cases (e.g., anthrax, bubonic plague) they are borne on virulence plasmids . In other cases (e.g., cholera toxin, diphtheria toxin), they may be carried on lysogenic bacteriophage and inserted into the chromosomes of certain bacterial strains. In yet other cases, they are grouped together in regions of the chromosome flanked by inverted repeats and known as pathogenicity islands ( Fig. 21.2 ). The inverted repeats imply that the pathogenicity islands may move as a unit by transposition.The same or closely related virulence factors may be chromosomally integrated in one bacterial strain and plasmid-borne in others.

The mobility of virulence factors has several implications. First, closely related bacterial strains vary enormously in their capacity to cause disease. Harmless bacterial strains that are closely related to cholera, plague, diphtheria, anthrax, and so on are widely distributed, but normally draw little attention. Second, virulence factors may be transferred to hitherto harmless strains, thus creating novel pathogens in one or a few steps. If the harmless strain is a close relative, we may merely get a new variant of an old disease (e.g., the new biotypes of cholera that have appeared over the past century are due to transfer of the CTXphi phage into harmless strains of Vibrio ). However, if the recipient for a block of virulence factors is unrelated to the previous “owner,” a genuinely novel bacterial pathogen may be created. It seems likely that bubonic plague, Yersinia pestis , arose in this way several thousand years ago. Apparently an ancestral Yersinia that caused a mild intestinal infection was transformed by acquiring two virulence plasmids into a devastating disease injected directly into the bloodstream by fleas.