A major contribution of molecular biology has been the development of improved methods for diagnosis. In practice diagnosis usually means identifying the agent of disease, whether a bacterium, virus, or protozoan.

A major contribution of molecular biology has been the development of improved methods for diagnosis. In practice diagnosis usually means identifying the agent of disease, whether a bacterium, virus, or protozoan. Some pathogenic bacteria grow slowly or not at all when cultured outside their host organisms. Viruses are obligate parasites and can only be grown in the laboratory by infecting appropriate cultured host cells. Furthermore, different microorganisms require different culture media and culture conditions. All these factors make traditional methods of identification laborious. In contrast, molecular approaches analyze macromolecules such as DNA, RNA, or protein rather than attempting to grow the disease agents. Some new methods involve the use of antibody technology and are dealt . Here we will consider nucleic acid–based approaches.

Molecular methods usually start with extraction of DNA from either cultured pathogens or an infected patient. The DNA is often amplified by PCR and then analyzed by sequencing or hybridization. Thus the same reagents and procedures may be used for many different microorganisms. Moreover, molecular methods are often quicker, more accurate, and more sensitive than classical microbiological techniques. Most of the molecular techniques used in clinical diagnosis have already been described elsewhere in this book. Here we will consider their applications.

Every species of organism has a different small-subunit ribosomal RNA sequence ( ssu rRNA ; 16S rRNA in bacteria, 18S rRNA for eukaryotes). Hence bacteria and eukaryotic parasites may be identified by analysis of their ssu rRNA sequences. In practice, the gene encoding the ssu rRNA is sequenced, rather than the RNA itself.

(a) Ribotyping may be done by detailed restriction analysis of the rRNA genes. DNA from a bacterial strain is digested with several different restriction enzymes and the fragments are separated by gel electrophoresis. Thefragments are transferred to a membrane and subjected to Southern blotting to identify bands. A probe that corresponds to part of the 16S rRNA sequence is used. Many bacteria have more than one 16S rRNA gene and so several bands will be seen for each digestion. This approach needs significant amounts of DNA.

(b) Amplification of DNA by PCR followed by DNA sequencing allows identification using only tiny amounts of DNA. Primers that recognize the conserved region of 16S rRNA are used to generate a segment of the 16S gene by PCR. The PCR fragment is then sequenced and compared with a database of known DNA sequences. Note that the same procedure and reagents are applicable to all bacterial infections. Furthermore, this method works with bacteria that cannot be cultured. Variants of PCR, such as RAPD (randomly amplified polymorphic DNA;), may also be used to identify the pathogen. For bacterial RAPD-PCR, a random mixture of six-base primers is often used. This allows different strains of the same bacterial species to be distinguished and has been used to track the source and spread of contaminating bacteria in food or water. 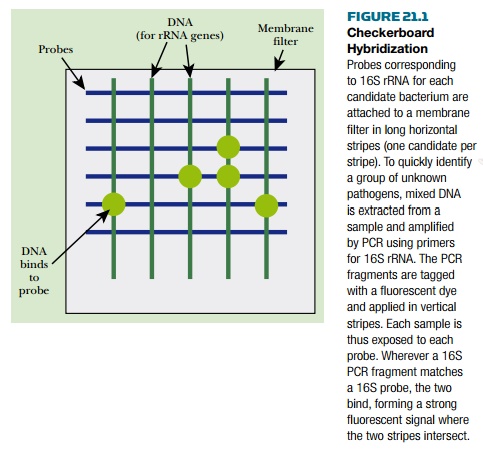 (c) Checkerboard hybridization is a technique that allows multiple bacteria to be detected and identified simultaneously in a single sample. A series of probes corresponding to different bacteria are applied in horizontal lines across a hybridization membrane ( Fig. 21.1 ). PCR is used to amplify a portion of the 16S gene from the target bacteria or clinical samples, which may contain a mixture of bacteria. The PCR fragments are then labeled with a fluorescent dye and applied vertically to the membrane. After denaturation and annealing to allow hybridization, the membrane is washed to remove unbound DNA. Those samples that hybridize to the probes appear as bright fluorescent spots.