Anthrax is caused by the gram-positive bacterium Bacillus anthracis , the first bacterium proven to be the cause of a disease.

Anthrax is caused by the gram-positive bacterium Bacillus anthracis , the first bacterium proven to be the cause of a disease. In 1877, Robert Koch grew this organism in pure culture, demonstrated its ability to form spores, and produced anthrax experimentally by injecting it into animals. Virulence factors of anthrax include the exotoxins and the capsule, both plasmid-borne. There are two plasmids: pXO1 carries the regulatory and structural genes for the exotoxins and pXO2 carries the genes for the capsule. The capsule is made from poly- D -glutamic acid and protects against attack by cells of the immune system. Chromosomal sequencing has shown that, apart from its virulence plasmids, Bacillus anthracis is remarkably similar to other “species” of Bacillus , such as Bacillus cereus (a common soil bacterium) and Bacillus thuringiensis (well known for making the insecticidal toxins used in transgenic plant engineering).

The genes for known virulence factors of B. anthracis comprise only a small percentage of the DNA of pXO1 and pXO2. For example, plasmid pXO1 (184 kb) has 143 predicted genes and carries a pathogenicity island of 45 kb bordered by inverted repeats. This region contains the three genes pag, lef , and cya , which encode the binding protein and the two exotoxins, respectively. Transcription of the toxin genes is under the control of two trans-acting regulatory genes, atxA and atxR . Toxin synthesis responds to levels of bicarbonate/carbon dioxide and temperature. These factors indicate whether the anthrax bacteria have reachedthe interior of a warm-blooded animal.

Anthrax makes two separate toxin proteins, edema factor (EF) and lethal factor (LF) , which both share the same binding protein, known as protective antigen (PA) . Edema toxin consists of edema factor plus PA and lethal toxin is lethal factor plus PA. Thus the protective antigen corresponds to the B protein of other toxins because it recognizes and binds to the host cell. PA forms a ring of seven subunits with a central cavity through which the toxic factors enter the target cell. When first synthesized, PA protein is an inactive monomer (83 kDa). Activation involves cleavage by a host protease to give the 63- kDa form (PA63), which has the ability to oligomerize and insert itself into the host cell membranes ( Fig. 21.10 ). 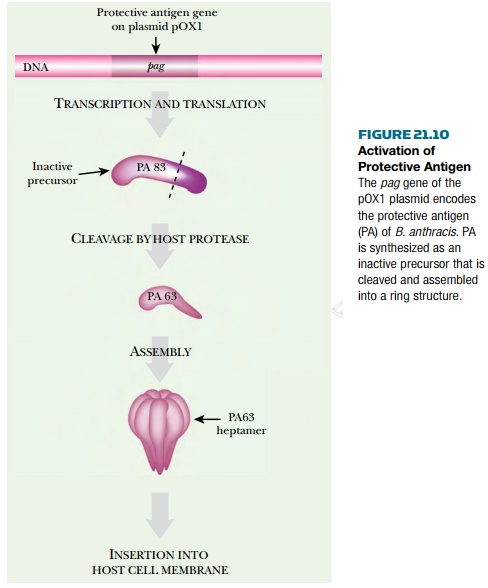 Edema factor acts as an adenylate cyclase. It is not fatal alone but increases the toxic effects of lethal factor. As its name implies, lethal factor is fatal alone, although higher doses are needed in the absence of edema factor. Lethal factor is a protease that cleaves several mitogen-activated protein kinase kinases (MAPKKs) such as MEK1, MEK2, and MKK3, which are involved in the control of animal cell division. Cleavage occurs within the N-terminal proline-rich region preceding the kinase domain. This disrupts the domain involved in protein-protein interactions needed for signaling. The lethal effects of anthrax toxin are due to the lysis of macrophages, which are especially susceptible to this toxin. This in turn causes the excessive release of interleukins, resulting in shock leading to respiratory failure and/or cardiac failure.