Almost all bacteria need iron because it is a cofactor for many enzymes, especially those of the respiratory chain.

Almost all bacteria need iron because it is a cofactor for many enzymes, especially those of the respiratory chain. However, the concentration of free iron in the body, including the bloodstream, is kept low by a variety of specialized proteins that bind iron very tightly. Surplus iron is bound by transferrin and lactoferrin , which act as iron transporters, or by ferritin , which is an iron storage protein.

Bacteria use iron chelators, known as siderophores , to bind iron and, if necessary, extract it from host proteins. Siderophores are excreted by the bacteria, bind iron, and are then taken back into the bacterial cell by specialized transport systems. Most bacteria have a variety of suchiron transport systems for use under different conditions. Enterochelin (or enterobactin) is a cyclic trimer of 2,3-dihydroxybenzoylserine (DHBS) and is perhaps the best known siderophore. It is made by E. coli and many enteric bacteria. The Fep transport system ( Fig. 21.5 ) conveys the enterochelin/Fe complex across both outer and inner membranes. Enterochelin binds iron so tightlythat once inside the bacterial cell it must be destroyed in order to release the iron. Fes protein is an esterasethat hydrolyzes Fe 3+ -enterochelin into DHBS monomers, releasing the iron. Despite this, enterochelin does not bind iron well enough to extract it from transferrin, the major iron binding protein of blood. 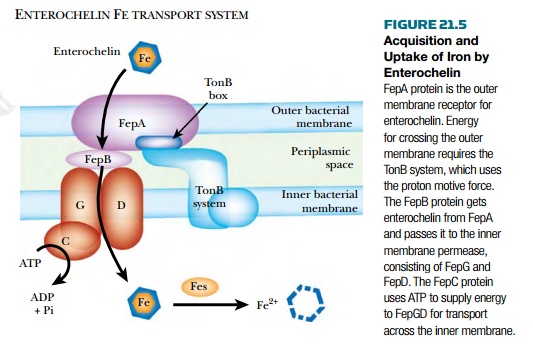 Pathogenic bacteria often possess more potent siderophores (plus their receptor systems) that are capable of extracting iron from transferrin. Two examples are mycobactin, made by Mycobacterium tuberculosis , and yersiniabactin, named after Yersinia pestis , the plague bacterium, in which it was first discovered. Yersiniabactin is widespread among pathogenic bacteria of the enteric family, and in Yersinia itself the genes for synthesis and uptake are clustered on a mobile pathogenicity island. Other virulent enteric bacteria carry plasmidborne genes for hemolysin , a toxin that lyses red blood cells, thus allowing access to the hemoglobin.