Attachment and Entry of Pathogenic Bacteria

The first step in many infections is the binding of bacteria to the surface of cells of the host animal. This is mediated by proteins known as adhesins that usually bind to sugar residues of glycoproteins or glycolipids on the animal cell surface.

ATTACHMENT AND ENTRY OF PATHOGENIC BACTERIA

A second common step of infection is entering an animal cell. Not all bacteria that adhere to animal cell surfaces possess the ability to invade. Some pathogens remain permanently outside the host cells. A classic example is cholera. Here the bacteria remain in the lumen of the intestine attached to the outside of intestinal cells. Only the toxin enters the intestinal cells and is responsible for the symptoms of the disease (see later discussion). Other pathogens possess various strategies for entering host cells. In some cases animal cells that are normally phagocytic, such as many ameboid cells of the immune system, ingest the bacteria but fail to destroy them. In other cases, bacteria provoke animal cells to swallow them by means of proteins known as invasins . For example, the invasin of Yersinia binds to the integrin proteins on mammalian cell surfaces and promotes internalization of the bacteria. 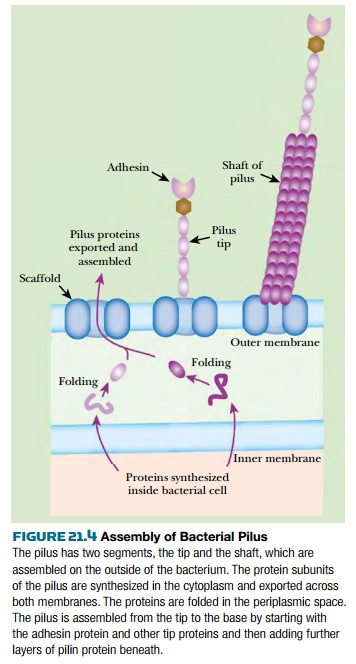 The spread of antibiotic resistance has provoked scientists to consider alternative approaches to treating infections. Several proposals have been made that take advantage of adhesins and invasins to turn the tables on bacterial invaders. Because these are still mostly in the experimental phase, we will outline a few examples briefly.

Binding studies combined with x-ray crystallography can reveal details of the molecular targets for adhesins. Thus, the FimH adhesin of pathogenic Escherichia coli binds mannose residues on the surface of mammalian glycoproteins. Several alkyl- and aryl-mannose derivatives bind with extremely high affinity to the adhesin and can block attachment to the natural receptor. Mannose derivatives might form the basis for designing antiadhesin drugs that prevent bacterial binding.

A further suggested step is to genetically engineer harmless gut bacteria, such as nonpathogenic strains of E. coli , to express the target oligosaccharide for adhesins on their cell surfaces. Pathogenic bacteria would then bind to these decoys instead of to mammalian cells. This would avoid the need for administration of expensive sugar derivatives, because the decoy strains of E. coli would multiply naturally in the intestine. Furthermore, one engineered decoy strain could carry multiple adhesin targets.

A third possibility is to equip nonpathogenic strains of E. coli with genes for adhesins and/or invasins from pathogens. These harmless strains would compete with the pathogens and block the receptors. Such engineered strains could also be used to deliver protein pharmaceuticals or large segments of DNA for gene therapy into mammalian cells. Once inside, the engineered E. coli would be digested by the mammalian cell and its therapeutic payload would be released.