Many human diseases are due to viruses. These are less well understood than bacterial diseases, to a large extent because viruses cannot be grown alone in culture but depend on a host cell.

Many human diseases are due to viruses. These are less well understood than bacterial diseases, to a large extent because viruses cannot be grown alone in culture but depend on a host cell. Until recently, protection against virus diseases relied on public health measures and vaccination. Only recently have a significant number of specific antiviral agents become available.

Pathogenic bacteria contain many unique components not found in eukaryotic cells, whichcan be targeted by antibiotics. In contrast, because viruses rely on the host cell for almost all of their metabolic reactions, they usually have few unique components apart from the structural proteins of the virus particle. Consequently, most chemical agents that prevent virus metabolism are also toxic to the host cells.

Like pathogenic bacteria, viruses must also attach to and invade host cells. Recognition proteins on the surface of the virus capsid bind to specific receptors on the surface of thehost cell. After entry, viral replication occurs at the expense of the host cell, which supplies not only raw material and energy, but also the ribosomes needed for synthesis of viral proteins and often many of the enzymes required for synthesis of viral nucleic acids as well. Finally, new virus particles are assembled and exit the cell. These stages, and corresponding antiviral agents are listed in Table 22.1 . Most modern antiviral agents have been developed to combat HIV and are discussed in the later section on AIDS.

In principle, soluble fragments of the host receptor protein should compete for binding virus particles and prevent them attaching to host cells. Such approaches (e.g., use of CD4 fragments for HIV) are presently being investigated. WIN compounds (named for Sterling Winthrop pharmaceuticals) prevent the attachment and entry of many picornaviruses . This virus family includes enteroviruses (e.g., poliovirus) and rhinoviruses (one of the major virus groups causing the common cold). Many of these viruses bind to the protein ICAM-1 (intercellular adhesion molecule 1) on the surface of animal cells. This fits into a dimple or “canyon” in the coat of the virus particle ( Fig. 22.1 ). At the bottom of the canyon is a hydrophobic pocket that normally contains a lipid molecule. WIN compounds displace this lipid and block changes in the conformation of the virus capsid protein, VP1, which are needed for binding to the receptor. A few antiviral agents are known that prevent entry of the host cell by the virus, such as amantadine in the case of influenza (see later discussion). 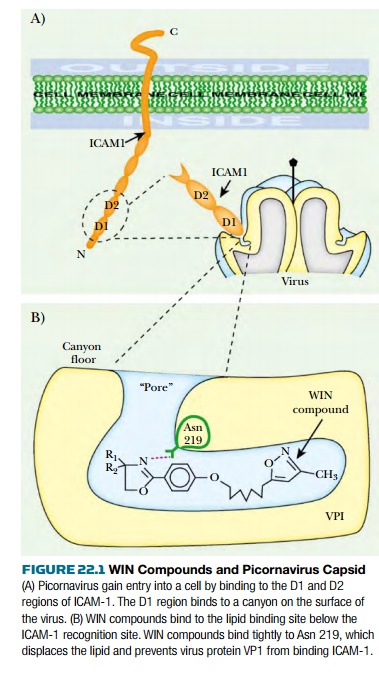