Prions are proteins with unique properties that are capable of causing inherited, spontaneous, or infectious disease.

Prions are proteins with unique properties that are capable of causing inherited, spontaneous, or infectious disease. The prion protein (PrP) exists in two conformations, the normal harmless or “cellular” form ( PrP c ) and the pathogenic ( PrP Sc ) form, named after scrapie , a disease of sheep ( Fig. 22.13 ). Rogue prion proteins bind to their normal relatives and induce them to refold into the disease-causing conformation. Thus, a small number of misfolded prions will eventually subvert the population of normal proteins. Over time, this leads to neural degeneration and eventually death. Mutations within the Prnp gene that encodes the prion protein may result in prions with a greatly increased likelihood of misfolding. This causes hereditary prion disease. Several clinically different variants are known, depending on the precise location of the mutation within the prion protein and the nature of the amino acid alteration. The most common is Creutzfeldt-Jakob disease (CJD). Even normal prions occasionally misfold. The result is spontaneous prion disease, which occurs at a rate of about one per million of the human population. 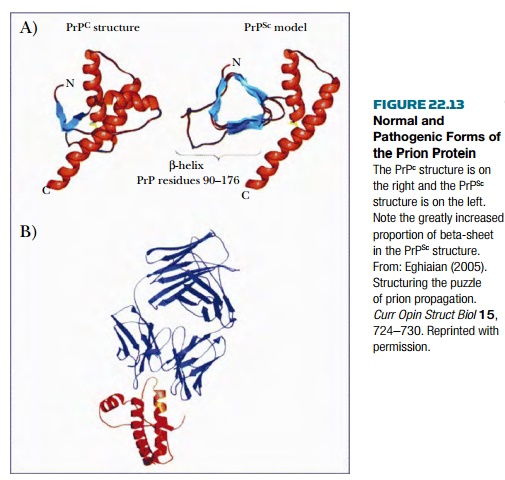 If misfolded prions are transmitted to another susceptible host, the result is infectious prion disease, also known as transmissible spongiform encephalopathy (TSE) . Such an infection can be passed from one cell to another and one animal to another by entry of the PrP Sc form of the prion. The two individuals may be of the same or different species. Infection of a new victim by prions is relatively difficult. It requires uptake of rogue prion proteins from infected nervous tissue, especially brain, but the details of infection remain obscure. The best known infectious prion diseases are:

1 . Scrapie, a disease of sheep and goats

This can apparently be transmitted via saliva, unlike the other TSEs. Scrapie is a disease of sheep and related animals that has been recorded going back several hundred years in Europe. The name comes from the behavior of infected sheep that constantly scrape themselves against fences, trees, or walls and often seriously injure themselves. Only certain breeds of sheep are susceptible, because of the slight differences in prion sequence between breeds. Dead and decomposing sheep may contaminate the grass of their fields with prion proteins. These are unusually stable and long-lived and may be eaten by healthy sheep.

Kuru was transmitted by ritual cannibalism and used to be endemic among the Fore tribe of New Guinea. The women had the honor of preparing the brains of dead relatives and participating in their ritual consumption. As a result, 90% of the victims were women together with younger children who accompanied them. It may take 10 to 20 years for symptoms to develop, but once they do, the progression from headaches to difficulty walking to death from neural degeneration took from 1 to 2 years. No one born since 1959, when cannibalism stopped, has developed kuru.

Brain degeneration, or spongiform encephalopathy, due to misfolded prions is possible in any mammalian species. In addition to scrapie, BSE, and CWD, a variety of less well-characterized prion diseases are known in other animals. In a way, these are really all the same disease, because there is a single prion gene encoding a single prion protein that is found in the brain of all mammals. Symptoms vary slightly from species to species, but after a long incubation period, the result is degeneration and death of cells of the central nervous system. As the popular name mad cow disease indicates, progressive degeneration of the brain and nervous system causes the infected animals to behave bizarrely during later stages of the disease.

Mad cow disease was spread by overly intensive farming practices. Animal remains, including the brains, were ground up and incorporated into animal feed. Because sheep remains were included in feed for cows, the epidemic of mad cow disease, which began in England in 1986, was originally blamed on sheep with scrapie. However, people in England and other European countries have eaten sheep with scrapie since the 1700s without any noticeable ill effects. Nor have any other domestic animals, including cows, ever caught scrapie, despite sharing the same fields. Moreover, sheep prions are not infectious for cows. It is now thought that a random flip-flop event converted a normal prion into the rogue form inside a cow’s brain somewhere in England in the late 1970s or early 1980s. The rogue cow prions were recycled in animal feed and spread, eventually causing an epidemic. After mad cow disease broke out in England, the recycling of animal remains in feed was prohibited and infected herds were destroyed. Mad cow disease can be transmitted to humans, but the rate of infection is extremely low.

The first human cases were confirmed in 1996 and were named variant CJD in an attempt to obscure their origin. However, when the rogue cow prion infects humans, the misfolded prions are characteristic of mad cow disease, not genuine CJD. In humans with CJD or kuru, the precise conformation of the misfolded prions is different. The human victims of madcow disease are scattered randomly throughout the population, suggesting that relativelyfew humans are actually susceptible to infection. As of 2006, about 200 people, mostly inEngland, have come down with BSE. Calculations based on the history and age distributionof BSE in humans since the outbreak started suggest an average incubation period of about15 years and that the number of cases will eventually reach around 300. These estimates aremuch lower than many earlier and rather emotional predictions and reflect the extremelylow infectivity of prions when crossing from one species to another.