AIDS (acquired immunodeficiency syndrome) is caused by human immunodeficiency virus (HIV), which damages the immune system. Most AIDS patients die of opportunistic infections . These are infections seen only in patients with defective immune systems and are caused by assorted viruses, bacteria, protozoans, and fungi that are normally relatively harmless but may take the opportunity to attack when host defenses are down. In addition, without immune surveillance, cancers caused by other viruses or somatic mutations often grow out of control.

HIV infects circulating white blood cells belonging to the immune system, the T cells . The CD4 protein is found on the surface of many T cells, where it acts as an important receptor during the immune response. HIV also uses the CD4 protein as a receptor ( Fig. 22.7 ). The gp120 protein in the outer envelope of HIV is a glycoprotein of 120 -kDa molecular weight. It recognizes and binds to CD4, which is needed for entry of the virus. 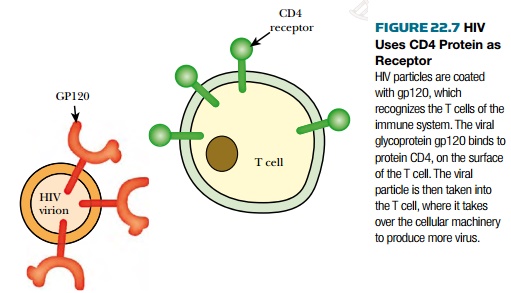 The CD4 protein is also found on the surface of some other immune system cells, the monocytes and macrophages. HIV does not seriously harm these two cell types, but the cells become reservoirs to spread the virus to more T cells. It is the damage to the T cells that is most critical to immune function. Once HIV has entered the T cell, the DNA form of the retrovirus genome integrates into the host chromosome and begins to express virus genes. Viral proteins are manufactured on host ribosomes. In particular, gp120 is made in large amounts and is inserted into the host cell membrane. Consequently, infected T cells carry the gp120 protein from the HIV particle in their surface membranes. This binds to the CD4 protein on other T cells. The result is that several T cells clump together and fuse ( Fig. 22.8 ). The giant, multiple cell soon dies. About 70% of the body’s T cells carry the CD4 receptor. As they gradually die off, the immune response fades away over a 5- to 10-year period. 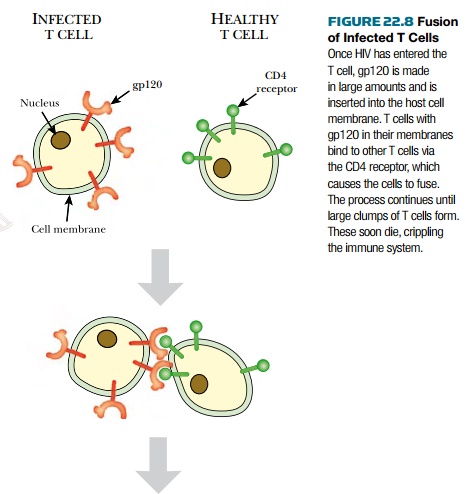 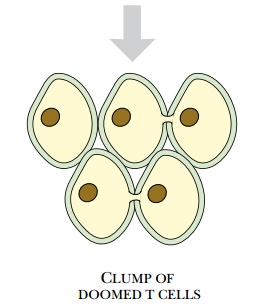