A new approach to screening compounds for use in prion therapy is based on the use of yeast prions . Some weird genetic behavior in yeast turned out to be due to proteins that behave like the prions of mammals.

A new approach to screening compounds for use in prion therapy is based on the use of yeast prions . Some weird genetic behavior in yeast turned out to be due to proteins that behave like the prions of mammals. The yeast prions are nonlethal and are cytoplasmicrather than membrane proteins. Nonetheless, they do show nucleic acid-free inheritance and their misfolded forms catalyze conversion of the normal protein into the misfolded version.

Furthermore, the misfolded versions of yeast prions form insoluble amyloid aggregates , like those of mammals. However, although they do display similar structural domains, the mammalian and yeast prion proteins show no sequence homology.

The two best known yeast prions are [URE3] and [PSI+], which are the misfolded forms of the Ure2p and Sup35p proteins. Ure2p is involved in nitrogen regulation and Sup35p is a translation termination factor. In yeast, prions are detected by loss of function. For example, the prion form, [PSI+], of the Sup35p protein is insoluble and inactive. This results in increased read-through of stop codons. This forms the basis for a clever and quick genetic screening system for possible antiprion drugs. 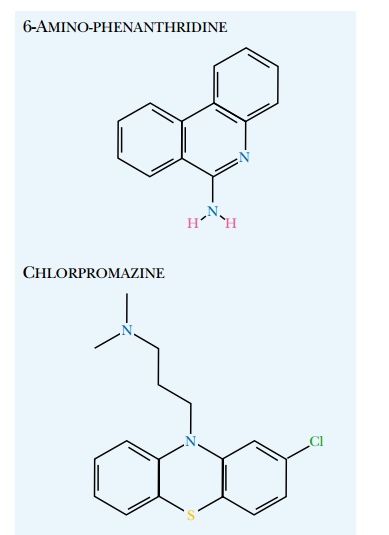 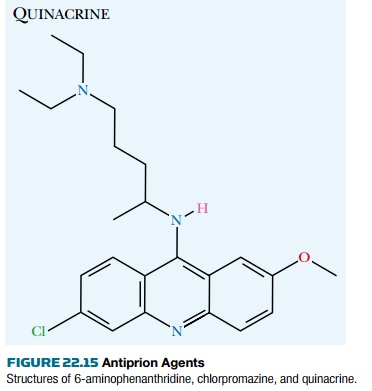 Yeast mutants defective in adenine biosynthesis turn red because of accumulation of metabolic by-products. A yeast mutant with a nonsense mutation (i.e., a premature stop codon) in the ADE1 gene thus forms red colonies. If the Sup35p protein is in its prion form, read-through of stop codons occurs and enough full-length protein is made to allow adenine synthesis, that is, the mutation is suppressed. Consequently, prion-positive strains form white colonies. If the prions are lost, the yeast goes back to forming red colonies. This allows rapid color-based screening of chemical compounds simply by adding them to the medium and looking for those causing a white-to-red color shift of the yeast colonies. As of 2003 several candidates had been identified ( Fig. 22.15 ). All were tricyclic, like quinacrine and chlorpromazine. The most active were six-amino derivatives of phenanthridine. It is hoped that this approach will lead to an effective treatment for prion disease.