Treatment of the AIDS Retrovirus

AIDS has recently overtaken malaria as the leading cause of death from infectious disease in the world.

TREATMENT OF THE AIDS RETROVIRUS

AIDS has recently overtaken malaria as the leading cause of death from infectious disease in the world. No complete cure or effective vaccine yet exists for AIDS, although several treatments are now available that significantly extend patients’ lives. The fundamental problem with all anti-AIDS drugs is that HIV is an RNA virus and so has a relatively high mutation rate. HIV mutates at a rate of approximately one base per genome per cycle of replication. Even within a single patient, HIV exists as a swarm of closely related variants known as a quasi-species . Consequently, strains of HIV resistant to individual drugs appear at a relatively high frequency. Attempts to control AIDS ( Fig. 22.9 ), whether by using vaccines, protein processing inhibitors, or antisense RNA, all face the same problem: HIV will mutate to produce resistant variants. In practice this problem may be partially overcome by simultaneous treatment with several drugs that hit different targets. 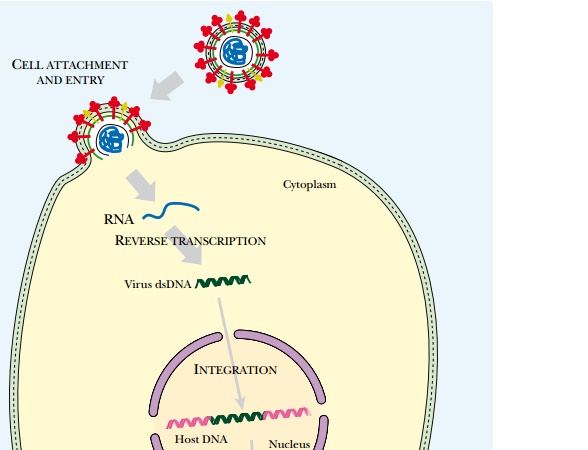 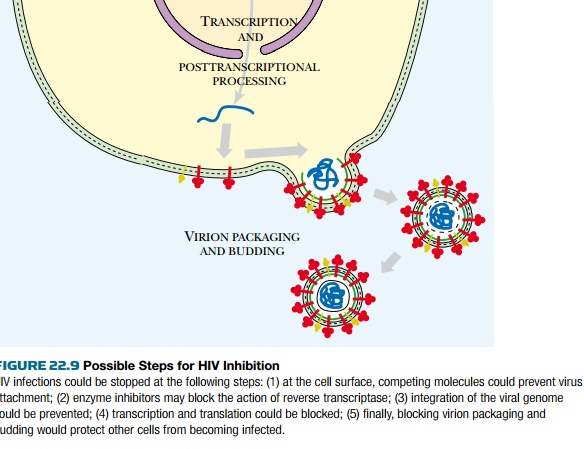 Azidothymidine ( AZT , or zidovudine) was one of the first drugs used against AIDS. It is an analog of thymidine that lacks the 3′-hydroxyl group. A variety of other nucleoside analogs that lack the 3′-hydroxyl group are also in use. AZT and other 3′-deoxy base analogs are converted to the 5′-triphosphate by the cell and then incorporated into the growing DNA chain during reverse transcription ( Fig. 22.10 ). Because AZT lacks a 3′-hydroxyl group, the DNA chain cannot be extended. AZT is thus a DNA chain terminator . Although AZT is incorporated more readily by the viral reverse transcriptase than by most host-cell DNA polymerases, it is not completely specific. Thus one major drawback is that AZT partially inhibits host DNA synthesis in uninfected cells of the body. In particular it is toxic to bone marrow cells (B cells), which are another part of the immune system. Mutations in the HIV reverse transcriptase may cause resistance to base analogs. For example, Met41Leu (i.e., replacement of methionine at position 41 with leucine) increases resistance to AZT by fourfold and a second mutation of Thr215Tyr gives an overall 70-fold resistance. 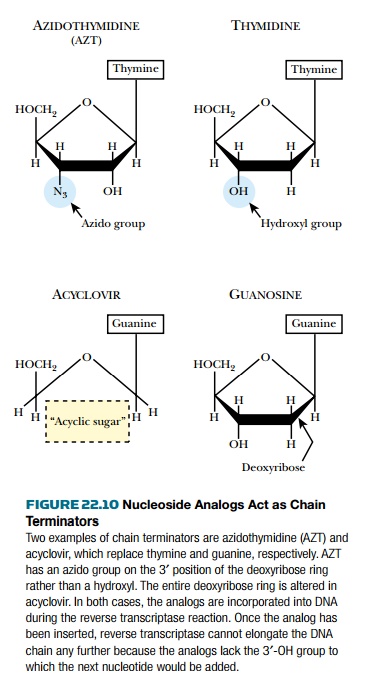 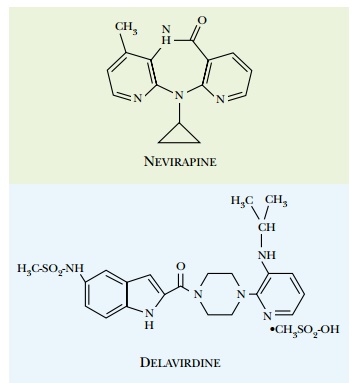 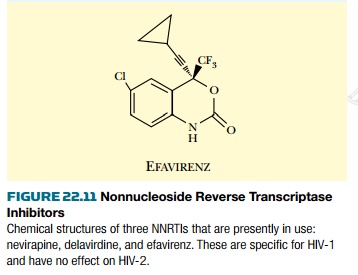 Most individual HIV proteins are joined together as polyproteins when first made and must therefore be cut apart by HIV protease. For example, the env gene is transcribed and translated to give gp160, which is cleaved to gp41 and gp120. The gag gene encodes a polyprotein that includes the proteins of the virus core. Consequently, inhibition of polyprotein cleavage will prevent the assembly of the virus particle. The HIV protease recognizes and binds a stretch of seven amino acids around the cleavage site. This step may be blocked with protease inhibitors that are analogs of several amino acid residues around the cut site ( Fig. 22.12 ). For example, saquinavir is an analog of Asn-Tyr-Pro. At present the favored approach in AIDS therapy is to use three drugs with different mechanisms in combination. Note that different drugs should not be used one after the other, because this allows resistance to develop to each drug in turn. If three are used simultaneously, emerging virus mutants that are resistant to one drug will be killed by the others. A typical cocktail consists of a reverse transcriptase inhibitor, hydroxyurea, and a protease inhibitor. Since 1995, when protease inhibitors became available, deaths from AIDS have dropped 60% to 80% in those nations whose citizens can afford expensive long-term treatment with costly pharmaceuticals. In 2000 about a third of HIV-positive Americans were receiving treatment and about 80% received a cocktail including protease inhibitors. In the United States, treatment with such a cocktail may cost from $800 to $1500 per month, although the cost keeps dropping. 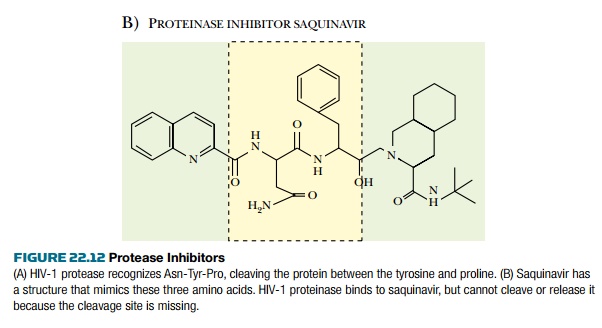 The inclusion of hydroxyurea is, in some ways, the cleverest part of the cocktail scheme. Hydroxyurea inhibits enzymes of the human host cell that are needed for the AIDS virus to replicate. Because human genes encode these proteins, the virus cannot mutate to producehydroxyurea-resistant enzymes. Both the advantage and the problem with hydroxyurea is that it inhibits human cell DNA replication. Therefore, it cannot be given in dosages so high they eliminate all DNA replication.