Sorting is one of the primary algorithms used in query processing. For example, whenever an SQL query specifies an ORDER BY-clause, the query result must be sorted.

Sorting is one of the primary algorithms used in query processing. For example, whenever an SQL query specifies an ORDER BY-clause, the query result must be sorted. Sorting is also a key component in sort-merge algorithms used for JOIN and other operations (such as UNION and INTERSECTION), and in duplicate elimination algorithms for the PROJECT operation (when an SQL query specifies the DISTINCT option in the SELECT clause). We will discuss one of these algorithms in this section. Note that sorting of a particular file may be avoided if an appropriate index— such as a primary or clustering index (see Chapter 18)—exists on the desired file attribute to allow ordered access to the records of the file.

External sorting refers to sorting algorithms that are suitable for large files of records stored on disk that do not fit entirely in main memory, such as most data-base files. The typical external sorting algorithm uses a sort-merge strategy, which starts by sorting small subfiles—called runs—of the main file and then merges the sorted runs, creating larger sorted subfiles that are merged in turn. The sort-merge algorithm, like other database algorithms, requires buffer space in main memory, where the actual sorting and merging of the runs is performed. The basic algorithm, outlined in Figure 19.2, consists of two phases: the sorting phase and the merging phase. The buffer space in main memory is part of the DBMS cache—an area in the computer’s main memory that is controlled by the DBMS. The buffer space is divided into individual buffers, where each buffer is the same size in bytes as the size of one disk block. Thus, one buffer can hold the contents of exactly one disk block.

In the sorting phase, runs (portions or pieces) of the file that can fit in the available buffer space are read into main memory, sorted using an internal sorting algorithm, and written back to disk as temporary sorted subfiles (or runs). The size of each run and the number of initial runs (nR) are dictated by the number of file blocks (b) and the available buffer space (nB). For example, if the number of available main memory buffers nB = 5 disk blocks and the size of the file b = 1024 disk blocks, then nR= (b/nB) or 205 initial runs each of size 5 blocks (except the last run which will have only 4 blocks). Hence, after the sorting phase, 205 sorted runs (or 205 sorted subfiles of the original file) are stored as temporary subfiles on disk.

In the merging phase, the sorted runs are merged during one or more merge passes. Each merge pass can have one or more merge steps. The degree of merging (dM) is the number of sorted subfiles that can be merged in each merge step. During each merge step, one buffer block is needed to hold one disk block from each of the sorted subfiles being merged, and one additional buffer is needed for containing one disk block of the merge result, which will produce a larger sorted file that is the result of merging several smaller sorted subfiles. Hence, dM is the smaller of (nB − 1) and nR, and the number of merge passes is (logdM(nR)) . In our example where nB = 5, dM = 4 (four-way merging), so the 205 initial sorted runs would be merged 4 at a time in each step into 52 larger sorted subfiles at the end of the first merge pass. These 52 sorted files are then merged 4 at a time into 13 sorted files, which are then merged into 4 sorted files, and then finally into 1 fully sorted file, which means that four passes are needed. 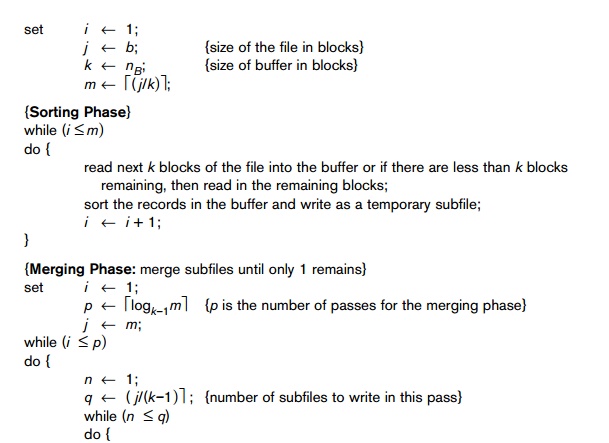 The performance of the sort-merge algorithm can be measured in the number of disk block reads and writes (between the disk and main memory) before the sorting of the whole file is completed. The following formula approximates this cost:

The first term (2 * b) represents the number of block accesses for the sorting phase, since each file block is accessed twice: once for reading into a main memory buffer and once for writing the sorted records back to disk into one of the sorted subfiles. The second term represents the number of block accesses for the merging phase. During each merge pass, a number of disk blocks approximately equal to the original file blocks b is read and written. Since the number of merge passes is (logdM nR), we get the total merge cost of (2 * b * (logdM nR)).

The minimum number of main memory buffers needed is nB = 3, which gives a dM of 2 and an nR of (b/3) . The minimum dM of 2 gives the worst-case performance of the algorithm, which is:

The following sections discuss the various algorithms for the operations of the relational algebra (see Chapter 6).