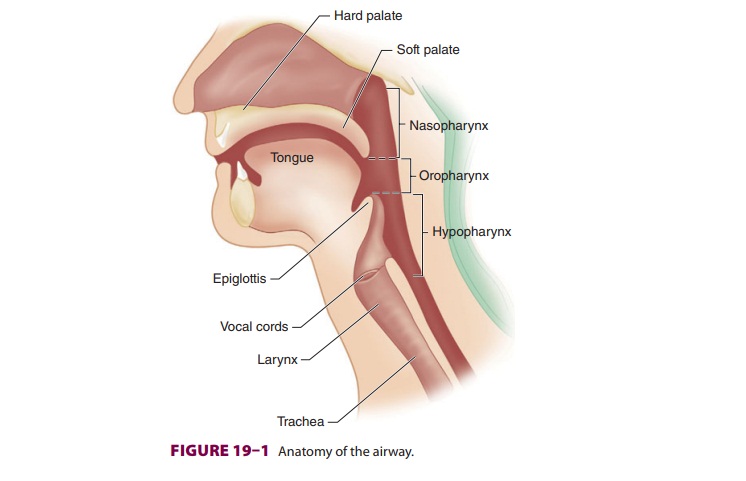 Expert airway management is an essential skill in anesthetic practice.

Expert airway management is an essential skill in anesthetic practice.

The upper airway consists of the pharynx, nose, mouth, larynx, trachea, and main-stem bronchi. The mouth and pharynx are also a part of the upper gas-trointestinal tract. The laryngeal structures in part serve to prevent aspiration into the trachea.

There are two openings to the human airway: the nose, which leads to the nasopharynx, and the mouth, which leads to the oropharynx. These pas-sages are separated anteriorly by the palate, but they join posteriorly in the pharynx ( Figure 19–1). The pharynx is a U-shaped fibromuscular structure that extends from the base of the skull to the cricoid car-tilage at the entrance to the esophagus. It opens ante-riorly into the nasal cavity, the mouth, the larynx, and the nasopharynx, oropharynx, and laryngo-pharynx, respectively. The nasopharynx is separated from the oropharynx by an imaginary plane that extends posteriorly. At the base of the tongue, the epiglottis functionally separates the orophar-ynx from the laryngopharynx (or hypopharynx). 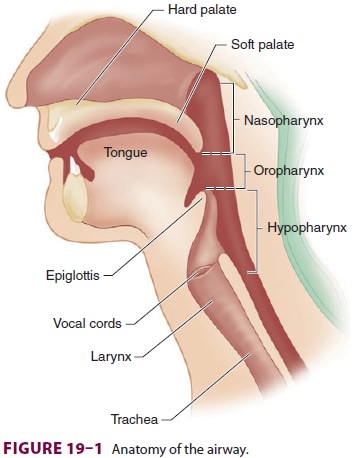 The epiglottis prevents aspiration by covering the glottis—the opening of the larynx—during swal-lowing. The larynx is a cartilaginous skeleton held together by ligaments and muscle. The larynx is composed of nine cartilages ( Figure 19–2): thyroid, cricoid, epiglottic, and (in pairs) arytenoid, cornicu-late, and cuneiform. The thyroid cartilage shields the conus elasticus, which forms the vocal cords. 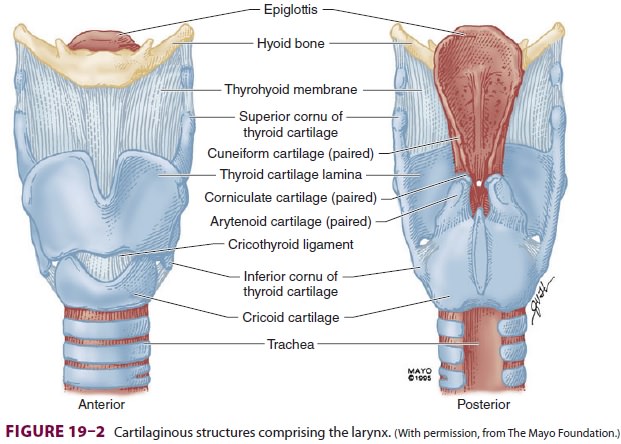 The sensory supply to the upper airway is derived from the cranial nerves ( Figure 19–3). The mucous membranes of the nose are innervated by the ophthalmic division (V1) of the trigeminal nerve anteriorly (anterior ethmoidal nerve) and by the maxillary division (V 2) posteriorly (sphenopala-tine nerves). The palatine nerves provide sensory fibers from the trigeminal nerve (V) to the supe-rior and inferior surfaces of the hard and soft pal-ate. The olfactory nerve (cranial nerve I) innervates the nasal mucosa to provide the sense of smell. The lingual nerve (a branch of the mandibular division [V3] of the trigeminal nerve) and the glossopharyn-geal nerve (the ninth cranial nerve) provide general sensation to the anterior two-thirds and posterior one-third of the tongue, respectively. Branches of the facial nerve (VII) and glossopharyngeal nerve provide the sensation of taste to those areas, respec-tively. The glossopharyngeal nerve also innervates the roof of the pharynx, the tonsils, and the under-surface of the soft palate. The vagus nerve (the tenth cranial nerve) provides sensation to the airway below the epiglottis. The superior laryngeal branch of the vagus divides into an external (motor) nerve and an internal (sensory) laryngeal nerve that pro-vide sensory supply to the larynx between the epi-glottis and the vocal cords. Another branch of the vagus, the recurrent laryngeal nerve, innervates the larynx below the vocal cords and the trachea. 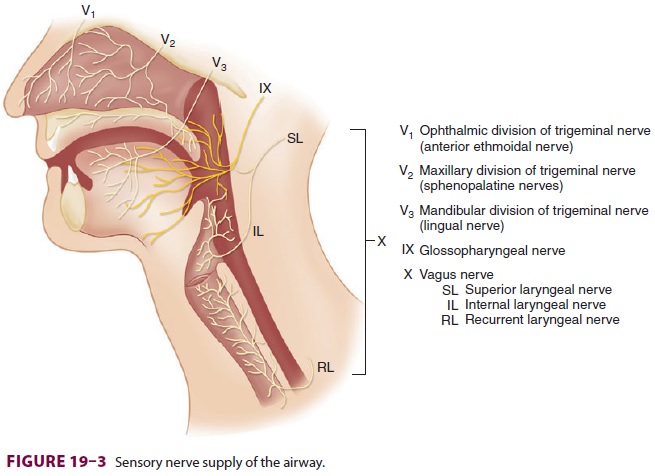 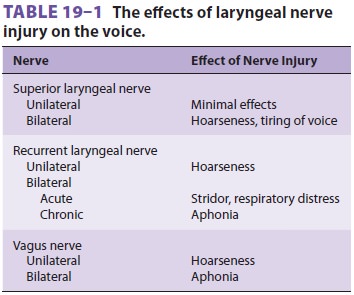 to a spectrum of speech disorders ( Table 19–1). Unilateral denervation of a cricothyroid muscle causes very subtle clinical findings. Bilateral palsy of the superior laryngeal nerve may result in hoarse-ness or easy tiring of the voice, but airway control is not jeopardized.

Bilateral injury to the vagus nerve affects both the superior and the recurrent laryngeal nerves. Thus, bilateral vagal denervation produces flaccid, midpositioned vocal cords similar to those seen after administration of succinylcholine. Although phona-tion is severely impaired in these patients, airway control is rarely a problem. 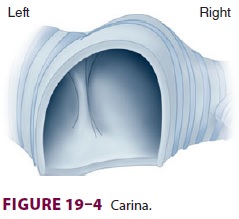 the thyroid cartilage. The superior thyroid artery is found along the lateral edge of the CTM.