The easiest thing that a sewage works is required to treat is sewage; a large number of industrial or commercial activities produce wastewaters or effluents which contain biodegradable contaminants and typically these are discharged to sewers.

The easiest thing that a sewage works is required to treat is sewage; a large number of industrial or commercial activities produce wastewaters or effluents which contain biodegradable contaminants and typically these are discharged to sewers. The character of these effluents varies greatly, dependent on the nature of the specific industry involved, both in terms of the likely BOD loading of any organic components and the type of additional contaminants which may also be present. Accordingly, the chemical industry may offer wastewaters with high COD and rich in various toxic compounds, while tannery water provides high BOD with a chromium component and the textile sector is another high BOD effluent producer, with the addition of surfactants, pesticides and dyes. Table 6.1 shows illustrative examples of typical effluent components for various industry sectors. 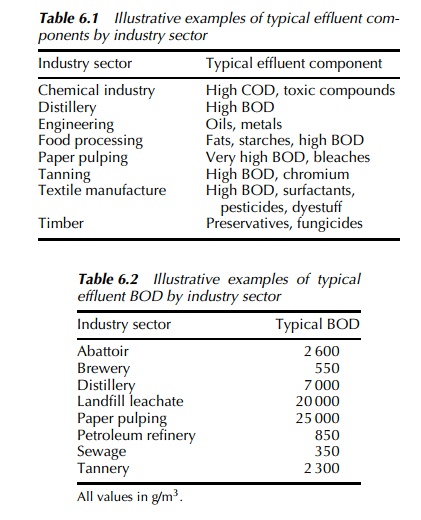 Table 6.2 shows the illustrative effluent BOD by industry sector, from which it should be apparent that the biodegradable component of any given wastewater is itself highly variable, both in terms of typical values between industries, but also in overall range. Thus, while paper pulping may present an effluent with a BOD of 25 000 g/m3 , sewage returns the lowest of the BODs quoted.

As might reasonably be expected from the foregoing discussion, the direct human biological contribution to wastewater loading is relatively light. A 65 kg person produces something in the region of 0.1 – 0.5 kg of faeces per day on a wet weight basis, or between 30 – 60 g of dry solids. The same person also produces around 1 – 1.5 kg of urine per day, with a total mass of dry solids amounting to some 60 – 80 g. Of course, the actual effluent arriving at a sewage works for treatment contains the nitrogen, phosphorus and other components originally excreted in the urine or faeces, but in a higher dilution due to flush-ing water and, often, storm drainage also. Local conditions, climate, details of the sewer system and water availability are, clearly, all potential factors affecting this, though a 49:1 ratio of water to solids is fairly typical for developed nations.