Introducing air into liquid wastes is a well-established technique to reduce pol-lutant potential and is often employed as an on-site method to achieve discharge consent levels, or reduce treatment costs, in a variety of industrial settings.

Introducing air into liquid wastes is a well-established technique to reduce pol-lutant potential and is often employed as an on-site method to achieve discharge consent levels, or reduce treatment costs, in a variety of industrial settings. It works by stimulating resident biomass with an adequate supply of oxygen, while keeping suspended solids in suspension and helping to mix the effluent to opti-mise treatment conditions, which also assists in removing the carbon dioxide produced by microbial activity. In addition, aeration can have a flocculant effect, the extent of which depends on the nature of the effluent. The systems used fall into one of two broad categories, on the basis of their operating criteria:

This classification is a useful way to consider the methods in common use, though it takes account of neither the rate of oxygen transfer, nor the total dis-solved oxygen content, which is occasionally used as an alternative way to define aeration approaches.

The liquid is contained within a vessel of suitable volume, with air being intro-duced at the bottom, oxygen diffusing out from the bubbles as they rise, thus aerating the effluent.

These systems can be categorised on the basis of their bubble size, with the crudest being coarse open-ended pipes and the most sophisticated being spe-cialised fine diffusers. Ultra-fine bubble (UFB) systems maximise the oxygen transfer effect, producing a dense curtain of very small bubbles, which conse-quently have a large surface area to volume ratio to maximise the diffusion. 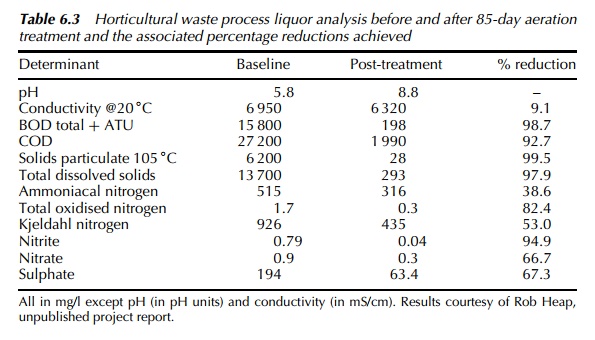 The UFB system is the most expensive, both to install in the first place and subsequently to run, as it requires comparatively high maintenance and needs a filtered air supply to avoid air-borne particulates blocking the narrow diffuser pores. Illustrative UFB aeration results, based on operational data, obtained from the amelioration of post-anaerobic digestion liquor from a horticultural waste processing plant, are shown in Table 6.3.

Though the comparatively simple approaches which produce large to medium sized bubbles are the least efficient, they are commonly encountered in use since they offer a relatively inexpensive solution.

In this method, a partly submerged mechanically driven paddle mounted on floats or attached to a gantry vigorously agitates the liquid, drawing air in from the surface and the effluent is aerated as the bubbles swirl in the vortex created.

Other variants on this theme are brush aerators, which are commonly used to provide both aeration and mixing in the sewage industry and submerged turbine spargers, which introduce air beneath an impeller, which again mixes as it aerates. This latter approach, shown in Figure 6.2, can be considered as a hybrid between mechanical and diffused systems and though, obviously, represents a higher capital cost, it provides great operational efficiency. A major factor in this is that the impeller establishes internal currents within the tank. As a result the bubbles injected at the bottom, instead of travelling straight up, follow a typi-cally spiral path, which increases their mean transit time through the body of the liquid and hence, since their residence period is lengthened, the overall efficacy of oxygen diffusion increases. 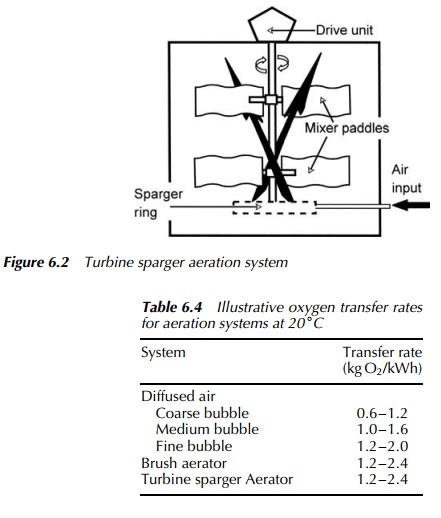 The design of the system and the processing vessel is crucial to avoid problems of oxygen transfer, liquid stratification and foaming, all of which can be major problems in operation. The time taken to effect treatment depends on the regime used and the nature of the effluent. In this context, Table 6.4 shows typical oxygen transfer rates for aeration systems at 20 ◦ C.

The value of aeration in the treatment process is not restricted to promoting the biological degradation of organic matter, since the addition of oxygen also plays an important role in removing a number of substances by promoting direct chemical oxidation. This latter route can often help eliminate organic compounds which are resistant to straightforward biological treatments.