Malignant expansion of cells from the myeloid cell line.

Most common in the middle aged and elderly

Aetiology is largely unknown although previous exposure to radiation, benzene or chemotherapy are known to be precipitating factors. 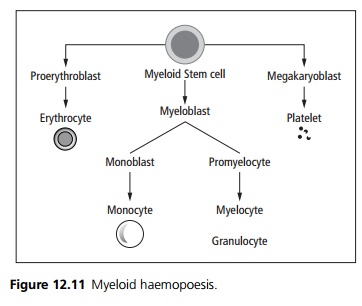 Patients with M3 (acute promyelocytic leukaemia) are particularly prone to disseminated intravascular coagulation due to the presence of procoagulants within the cytoplasmic granules of the promyelocyte. In M3 there is a characteristic chromosomal translocation t(15:17), the promyelocytic leukaemia (PML) gene and the retinoic acid receptor come to lie next to each other and are therefore deregulated. Ninety-five per cent of patients with M3 are induced into remission by treatment with high dose retinoic acid. This is not sustained and chemotherapy should also be used.

Cells in M5 (acute monocytic leukaemia) secrete lysozyme (an antibacterial enzyme) which can damage the renal tubules causing hypokalaemia. Gum hypertrophy and hepatosplenomegaly is common within this subgroup.

Often there is an insidious onset of anorexia, malaise and lethargy due to anaemia. There is often a history of recurrent infections and/or easy bruising and mucosal bleeding. Other presentations include lymph node en-largement, bone and joint pain. On examination there may be pallor, bruising, hepatosplenomegaly and lymphadenopathy.

Abnormal leukaemic cells of the myeloid cell line replace the normal marrow. Morphologically the blast cells in AML may contain a stick like inclusion – Auer rods. The leukaemia is typed by cytochemical staining and monoclonal antibodies to look for cell surface markers.

70% of those under 60 years will achieve remission with combination chemotherapy although the majority relapse within 3 years.