Grammars are capable of describing most, but not all, of the syntax of pro-gramming languages. For instance, the requirement that identifiers be declared before they are used, cannot be described by a context-free grammar. Therefore, the sequences of tokens accepted by a parser form a superset of the program-ming language; subsequent phases of the compiler must analyze the output of the parser to ensure compliance with rules that are not checked by the parser.

This section begins with a discussion of how to divide work between a lexical analyzer and a parser. We then consider several transformations that could be applied to get a grammar more suitable for parsing. One technique can elim-inate ambiguity in the grammar, and other techniques — left-recursion elimi-nation and left factoring — are useful for rewriting grammars so they become suitable for top-down parsing. We conclude this section by considering some programming language constructs that cannot be described by any grammar.

a compiler into two manageable-sized components.

The lexical rules of a language are frequently quite simple, and to describe them we do not need a notation as powerful as grammars.

More efficient lexical analyzers can be constructed automatically from regular expressions than from arbitrary grammars.

There are no firm guidelines as to what to put into the lexical rules, as op-posed to the syntactic rules. Regular expressions are most useful for describing the structure of constructs such as identifiers, constants, keywords, and white space. Grammars, on the other hand, are most useful for describing nested structures such as balanced parentheses, matching begin-end's, corresponding if-then-else's, and so on. These nested structures cannot be described by regular expressions.

Here "other" stands for any other statement. According to this grammar, the compound conditional statement 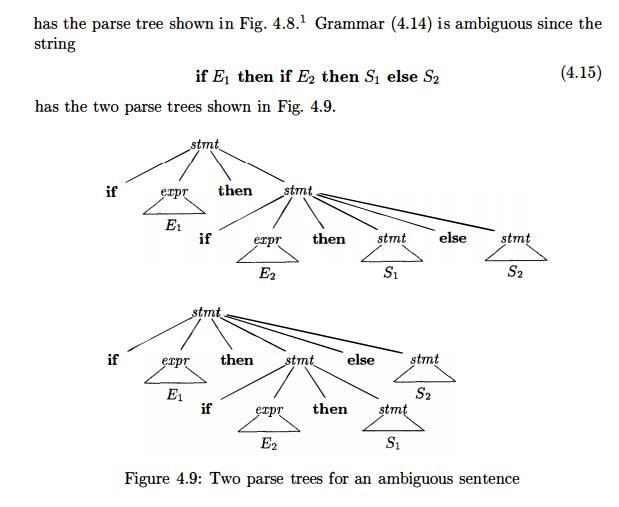 In all programming languages with conditional statements of this form, the first parse tree is preferred. The general rule is, "Match each else with the closest unmatched then . " 2 This disambiguating rule can theoretically be in-corporated directly into a grammar, but in practice it is rarely built into the productions.

Example 4.16 : We can rewrite the dangling-else grammar (4.14) as the fol-lowing unambiguous grammar. The idea is that a statement appearing between a t h e n and an else must be "matched"; that is, the interior statement must not end with an unmatched or open then . A matched statement is either an if-then-else statement containing no open statements or it is any other kind of unconditional statement. Thus, we may use the grammar in Fig. 4.10. This grammar generates the same strings as the dangling-else grammar (4.14), but it allows only one parsing for string (4.15); namely, the one that associates each else with the closest previous unmatched then . •

without changing the strings derivable from A. This rule by itself suffices for many grammars.

Immediate left recursion can be eliminated by the following technique, which works for any number of A-productions. First, group the productions as

where no bi begins with an A.  Then, replace the A-productions by

This procedure eliminates all left recursion from the A and A' pro-ductions (provided no is e), but it does not eliminate left recursion involving derivations of two or more steps. For example, consider the grammar

The nonterminal S  is left  recursive because  S =>Aa=> Sda,  but  it  is  not immediately left recursive.

INPUT : Grammar G with no cycles or e-productions.

OUTPUT : An equivalent grammar with no left recursion.

METHOD : Apply the algorithm in Fig. 4.11 to G. Note that the resulting non-left-recursive grammar may have e-productions.

Figure 4.11:  Algorithm to eliminate left recursion from a grammar

The procedure in Fig. 4.11 works as follows. In the first iteration for % = 1, the outer for-loop of lines (2) through (7) eliminates any immediate left recursion among A1-productions. Any remaining A1 productions of the form A1 —> A1a must therefore have / > 1. After the i — 1st iteration of the outer for-loop, all nonterminals Ak, where k < i, are "cleaned"; that is, any production Ak —> Aia, must have I > k. As a result, on the ith. iteration, the inner loop of lines (3) through (5) progressively raises the lower limit in any production Ai -> A ma, until we have m > i. Then, eliminating immediate left recursion for the Ai productions at line (6) forces m to be greater than i.

Example 4.20 :  Let us apply Algorithm 4.19 to the grammar (4.18).  Technically, the algorithm is not guaranteed to work, because of the e-production, but in this case, the production A -» e turns out to be harmless.

We order the nonterminals S, A. There is no immediate left recursion among the 5-productions, so nothing happens during the outer loop for i = 1. For i = 2, we substitute for S in A —> S d to obtain the following ^.-productions.

Eliminating the immediate left recursion among these ^-productions yields the following grammar.

Left factoring is a grammar transformation that is useful for producing a gram-mar suitable for predictive, or top-down, parsing. When the choice between two alternative ^-productions is not clear, we may be able to rewrite the pro-ductions to defer the decision until enough of the input has been seen that we can make the right choice.

For example, if we have the two productions

on seeing the input if, we cannot immediately tell which production to choose to expand stmt. In general, if A ->• a b1 | a b2 are two A-productions, and the input begins with a nonempty string derived from a, we do not know whether to expand A to a b1 or ab2 . However, we may defer the decision by expanding A to aA'. Then, after seeing the input derived from a, we expand A' to b1 or to b2. That is, left-factored, the original productions become 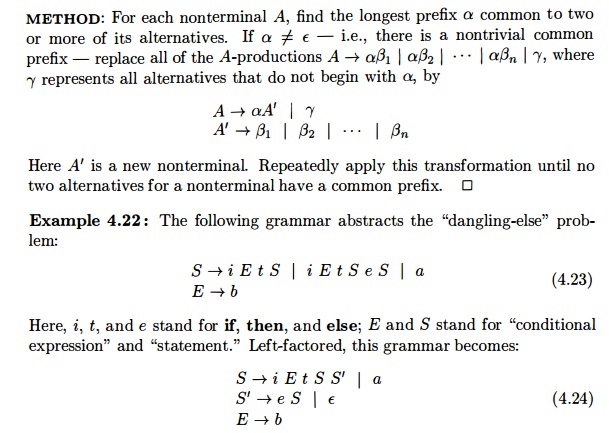 Thus, we may expand 5 to iEtSS' on input i, and wait until i EtS has been seen to decide whether to expand S' to eS or to e. Of course, these grammars are both ambiguous, and on input e, it will not be clear which alternative for S' should be chosen. Example 4.33 discusses a way out of this dilemma. •

The abstract language is L1 — {wcw 1 w is in (a|b)*} . L1 consists of all words composed of a repeated string of a's and 6's separated by c, such as aabcaab. While it is beyond the scope of this book to prove it, the non-context-freedom of Li directly implies the non-context-freedom of programming languages like C and Java, which require declaration of identifiers before their use and which allow identifiers of arbitrary length.

For this reason, a grammar for C or Java does not distinguish among identi-fiers that are different character strings. Instead, all identifiers are represented by a token such as id in the grammar. In a compiler for such a language, the semantic-analysis phase checks that identifiers are declared before they are used. •

Again, the typical syntax of function declarations and uses does not concern itself with counting the number of parameters. For example, a function call in C-like language might be specified by

with suitable productions for expr.        Checking that the number of parameters in a call is correct is usually done during the semantic-analysis phase.

Exercise 4 . 3 . 1 : The following is a grammar for regular expressions over sym-bols a and b only, using + in place of | for union, to avoid conflict with the use of vertical bar as a metasymbol in grammars:

Does left factoring make the grammar suitable for top-down parsing?

In addition to left factoring, eliminate left recursion from the original grammar.

Is the resulting grammar suitable for top-down parsing?

Exercise 4 . 3 . 3 : The following grammar is proposed to remove the "dangling-else ambiguity" discussed in Section 4.3.2:

Show that this grammar is still ambiguous.