This section shows how a parser generator can be used to facilitate the construc-tion of the front end of a compiler. We shall use the LALR parser generator Yacc as the basis of our discussion, since it implements many of the concepts discussed in the previous two sections and it is widely available. Yacc stands for "yet another compiler-compiler," reflecting the popularity of parser generators in the early 1970s when the first version of Yacc was created by S. C. Johnson. Yacc is available as a command on the UNIX system, and has been used to help implement many production compilers.

A translator can be constructed using Yacc in the manner illustrated in Fig. 4.57. First, a file, say translate.y, containing a Yacc specification of the translator is prepared. The UNIX system command

transforms the file translate.y into a C program called y.tab.c using the LALR method outlined in Algorithm 4.63. The program y.tab.c is a repre-sentation of an LALR parser written in C, along with other C routines that the user may have prepared. The LALR parsing table is compacted as described in Section 4.7. By compiling y.tab.c along with the ly library that contains the LR parsing program using the command

we obtain the desired object program a. out that performs the translation spec-ified by the original Yacc program . 7 If other procedures are needed, they can be compiled or loaded with y.tab.c, just as with any C program. 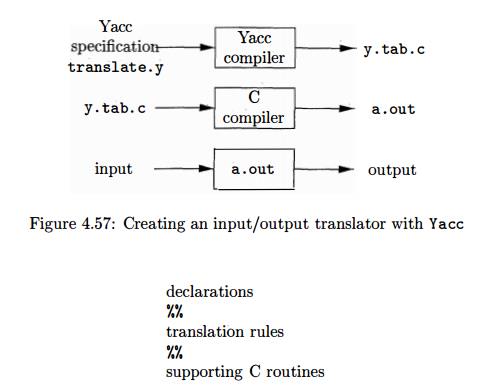 The token digit is a single digit between 0 and 9. A Yacc desk calculator program derived from this grammar is shown in Fig. 4.58. •

There are two sections in the declarations part of a Yacc program; both are optional. In the first section, we put ordinary C declarations, delimited by .'/.{ and '/,}. Here we place declarations of any temporaries used by the translation rules or procedures of the second and third sections. In Fig. 4.58, this section contains only the include-statement

that causes the C preprocessor to include the standard header file <ctype. h> that contains the predicate i s d i g i t . 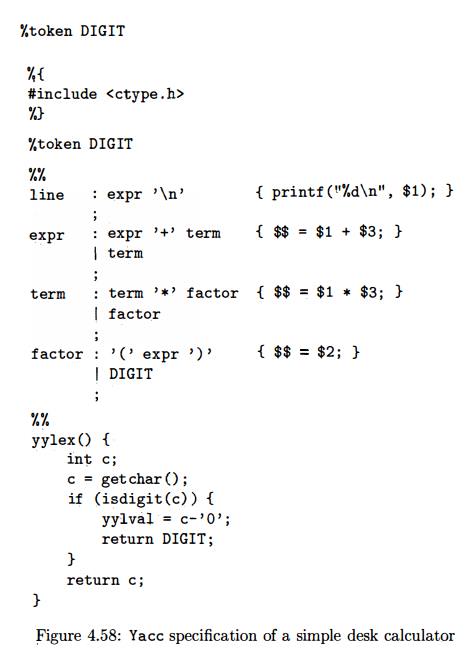 declares DIGIT to be  a token.   Tokens declared in this  section can then  be used in the second and third parts of the Yacc specification.  If Lex is used to create the lexical analyzer that passes token to the Yacc parser, then these token declarations are also made available to the analyzer generated by Lex, as discussed in Section 3.5.2.

In the part of the Yacc specification after the first %% pair, we put the translation rules. Each rule consists of a grammar production and the associated semantic action. A set of productions that we have been writing:

In a Yacc production, unquoted strings of letters and digits not declared to be tokens are taken to be nonterminals. A quoted single character, e.g. ' c', is taken to be the terminal symbol c, as well as the integer code for the token represented by that character (i.e., Lex would return the character code for ' c' to the parser, as an integer). Alternative bodies can be separated by a vertical bar, and a semicolon follows each head with its alternatives and their semantic actions. The first head is taken to be the start symbol.

Notice that we have added a new starting production

The third part of a Yacc specification consists of supporting C-routines. A lexical analyzer by the name y y l e x O must be provided. Using Lex to produce y y l e x O is a common choice; see Section 4.9.3. Other procedures such as error recovery routines may be added as necessary.

Let us now modify the Yacc specification so that the resulting desk calculator becomes more useful. First, we shall allow the desk calculator to evaluate a sequence of expressions, one to a line. We shall also allow blank lines between expressions. We do so by changing the first rule to

In Yacc, an empty alternative, as the third line is, denotes e.

The resulting Yacc specification is shown in Fig. 4.59. 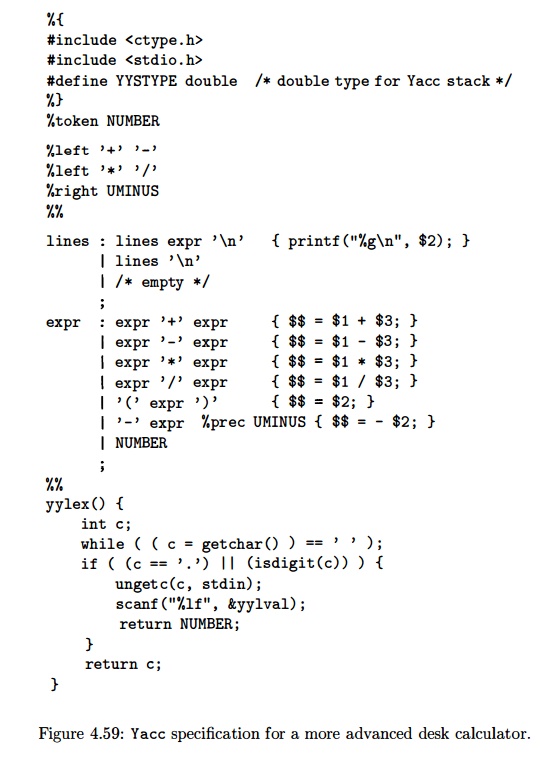 A reduce/reduce conflict is resolved by choosing the conflicting production listed first in the Yacc specification.

Since these default rules may not always be what the compiler writer wants, Yacc provides a general mechanism for resolving shift/reduce conflicts. In the declarations portion, we can assign precedences and associativities to terminals. The declaration

makes + and - be of the same precedence and be left associative. We can declare an operator to be right associative by writing

and we can force an operator to be a nonassociative binary operator (i.e., two occurrences of the operator cannot be combined at all) by writing

in Fig. 4.59 gives the token UMINUS a precedence level higher than that of the five preceding terminals.

Normally, the precedence of a production is taken to be the same as that of its rightmost terminal. This is the sensible decision in most cases. For example, given productions

In those situations where the rightmost terminal does not supply the proper precedence to a production, we can force a precedence by appending to a pro-duction the tag

This "terminal" can be a placeholder, like UMINUS in Fig. 4.59; this termi-nal is not returned by the lexical analyzer, but is declared solely to define a precedence for a production. In Fig. 4.59, the declaration

assigns to the token UMINUS a precedence that is higher than that of * and /. In the translation rules part, the tag:

at the end of the production

makes the unary-minus operator in this production have a higher precedence than any other operator.

and we have each Lex action return a terminal known to Yacc. By using the # i n c l u d e "lex . yy . c" statement, the program yylex has access to Yacc's names for tokens, since the Lex output file is compiled as part of the Yacc output file y.tab.c.

to obtain the desired translator.

The Lex specification in Fig. 4.60 can be used in place of the lexical analyzer in Fig. 4.59. The last pattern, meaning "any character," must be written 1n| . since the dot in Lex matches any character except newline,

However, when the parser generated by Yacc encounters an error, it treats the states whose sets of items contain error productions in a special way. On encountering an error, Yacc pops symbols from its stack until it finds the top-most state on its stack whose underlying set of items includes an item of the form A —> • error a. The parser then "shifts" a fictitious token error onto the stack, as though it saw the token error on its input.

When cc is e, a reduction to A occurs immediately and the semantic action associated with the production A —>• • error (which might be a user-specified error-recovery routine) is invoked. The parser then discards input symbols until it finds an input symbol on which normal parsing can proceed.

If a is not empty, Yacc skips ahead on the input looking for a substring that can be reduced to a. If a consists entirely of terminals, then it looks for this string of terminals on the input, and "reduces" them by shifting them onto the stack. At this point, the parser will have error a on top of its stack. The parser will then reduce error a to A, and resume normal parsing.

For example, an error production of the form 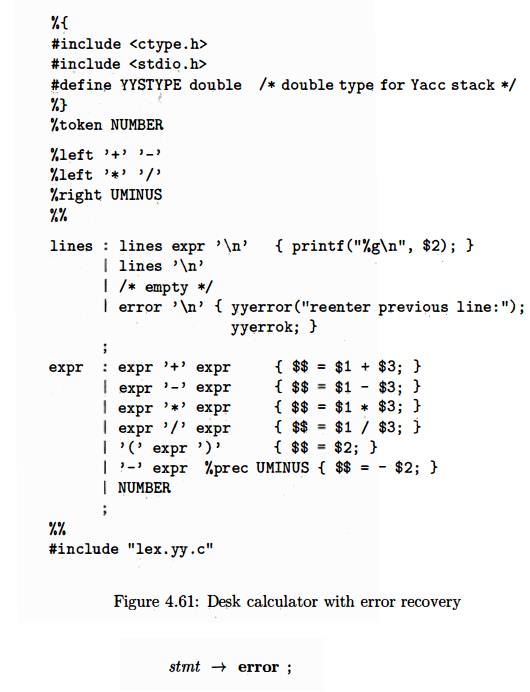 would specify to the parser that it should skip just beyond the next semicolon on seeing an error, and assume that a statement had been found. The semantic routine for this error production would not need to manipulate the input, but could generate a diagnostic message and set a flag to inhibit generation of object code, for example.

This error production causes the desk calculator to suspend normal parsing when a syntax error is found on an input line. On encountering the error, the parser in the desk calculator starts popping symbols from its stack until it encounters a state that has a shift action on the token error. State 0 is such a state (in this example, it's the only such state), since its items include

Also, state 0 is always on the bottom of the stack. The parser shifts the token error onto the stack, and then proceeds to skip ahead in the input until it has found a newline character. At this point the parser shifts the newline onto the stack, reduces error ' 1 n ' to lines, and emits the diagnostic message "reenter previous line:". The special Yacc routine yyerrok resets the parser to its normal mode of operation. •

Exercise 4 . 9 . 1 : Write a Yacc program that takes boolean expressions as input [as given by the grammar of Exercise 4.2.2(g)] and produces the truth value of the expressions.

Exercise 4 . 9 . 2 : Write a Yacc program that takes lists (as defined by the grammar of Exercise 4.2.2(e), but with any single character as an element, not just a) and produces as output a linear representation of the same list; i.e., a

single list of the elements, in the same order that they appear in the input.

! Exercise 4 . 9 . 3 : Write a Yacc program that tells whether its input is a palin-drome (sequence of characters that read the same forward and backward).

! Exercise 4 . 9 . 4 : Write a Yacc program that takes regular expressions (as de-fined by the grammar of Exercise 4.2.2(d), but with any single character as an argument, not just a) and produces as output a transition table for a nonde-terministic finite automaton recognizing the same language.