A bottom-up parse corresponds to the construction of a parse tree for an input string beginning at the leaves (the bottom) and working up towards the root (the top). It is convenient to describe parsing as the process of building parse trees, although a front end may in fact carry out a translation directly without building an explicit tree. The sequence of tree snapshots in Fig. 4.25 illustrates

a bottom-up parse of the token stream id * id, with respect to the expression grammar (4.1).

This section introduces a general style of bottom-up parsing known as shift-reduce parsing. The largest class of grammars for which shift-reduce parsers can be built, the LR grammars, will be discussed in Sections 4.6 and 4.7. Although it is too much work to build an LR parser by hand, tools called automatic parser generators make it easy to construct efficient LR parsers from suitable gram-mars. The concepts in this section are helpful for writing suitable grammars to make effective use of an LR parser generator. Algorithms for implementing parser generators appear in Section 4.7.

We can think of bottom-up parsing as the process of "reducing" a string w to the start symbol of the grammar. At each reduction step, a specific substring matching the body of a production is replaced by the nonterminal at the head of that production.

The key decisions during bottom-up parsing are about when to reduce and about what production to apply, as the parse proceeds.

Example 4.37 : The snapshots in Fig. 4.25 illustrate a sequence of reductions; the grammar is the expression grammar (4.1). The reductions will be discussed in terms of the sequence of strings

By definition, a reduction is the reverse of a step in a derivation (recall that in a derivation, a nonterminal in a sentential form is replaced by the body of one of its productions). The goal of bottom-up parsing is therefore to construct a derivation in reverse. The following derivation corresponds to the parse in Fig. 4.25:

This derivation is in fact a rightmost derivation.

For example, adding subscripts to the tokens id for clarity, the handles during the parse of idi * i d 2 according to the expression grammar (4.1) are as in Fig. 4.26. Although T is the body of the production E -» T, the symbol T is not a handle i n the sentential form T * id 2 . I f T were indeed replaced b y E , we would get the string E * i d 2 , which cannot be derived from the start symbol E. Thus, the leftmost substring that matches the body of some production need not be a handle. 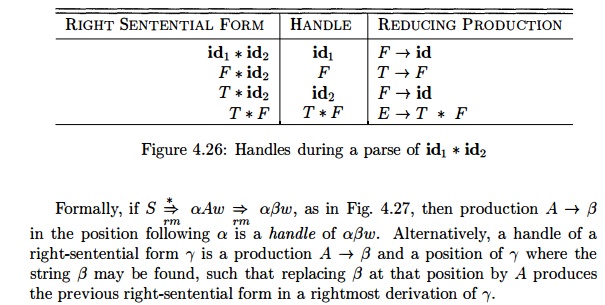 Notice that the string w to the right of the handle must contain only terminal symbols. For convenience, we refer to the body b rather than A -> b as a handle. Note we say "a handle" rather than "the handle," because the grammar could be ambiguous, with more than one rightmost derivation of abw. If a grammar is unambiguous, then every right-sentential form of the grammar has exactly one handle.

A rightmost derivation in reverse can be obtained by "handle pruning." That is, we start with a string of terminals w to be parsed. If ID is a sentence 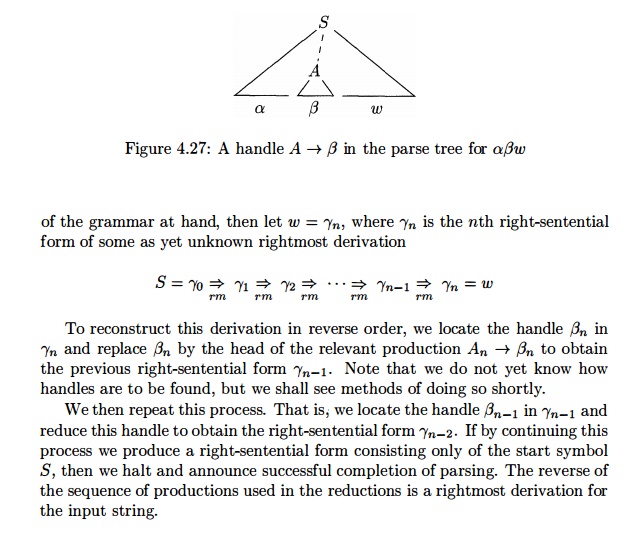 Shift-reduce parsing is a form of bottom-up parsing in which a stack holds grammar symbols and an input buffer holds the rest of the string to be parsed.

As we shall see, the handle always appears at the top of the stack just before it is identified as the handle.

We use $ to mark the bottom of the stack and also the right end of the input. Conventionally, when discussing bottom-up parsing, we show the top of the stack on the right, rather than on the left as we did for top-down parsing.

Initially, the stack is empty, and the string w is on the input, as follows:

During a left-to-right scan of the input string, the parser shifts zero or more input symbols onto the stack, until it is ready to reduce a string /3 of grammar symbols on top of the stack. It then reduces (3 to the head of the appropriate production. The parser repeats this cycle until it has detected an error or until the stack contains the start symbol and the input is empty:

Upon entering this configuration, the parser halts and announces successful completion of parsing. Figure 4.28 steps through the actions a shift-reduce parser might take in parsing the input string idi *icl2 according to the expression grammar (4.1). 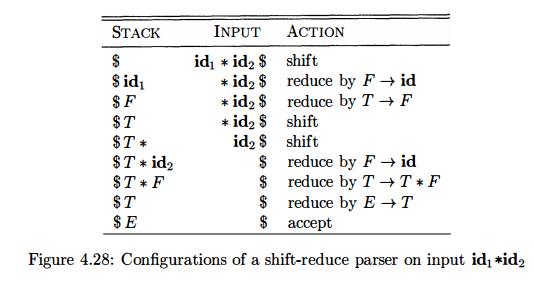 While the primary operations are shift and reduce, there are actually four possible actions a shift-reduce parser can make: (1) shift, (2) reduce, (3) accept, and (4) error.

1. Shift. Shift the next input symbol onto the top of the stack.

The use of a stack in shift-reduce parsing is justified by an important fact: the handle will always eventually appear on top of the stack, never inside. This fact can be shown by considering the possible forms of two successive steps in any rightmost derivation. Figure 4.29 illustrates the two possible cases. In case (1), A is replaced by (3By, and then the rightmost nonterminal B in the body (3By is replaced by 7. In case (2), A is again expanded first, but this time the body is a string y of terminals only.  The next rightmost nonterminal B will be somewhere to the left of y. 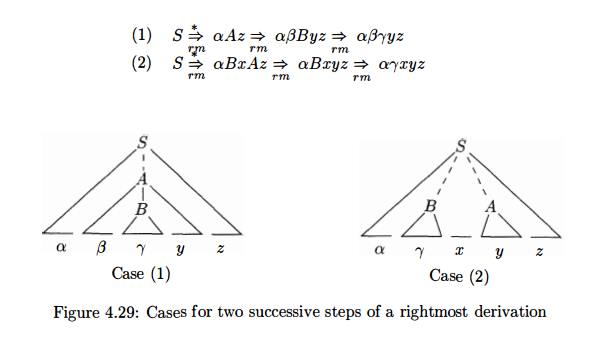 Consider case (1) in reverse, where a shift-reduce parser has just reached the configuration

with the handle bBy on top of the stack, and it gets reduced to A. Now consider case (2). In configuration

In both cases, after making a reduction the parser had to shift zero or more symbols to get the next handle onto the stack. It never had to go into the stack to find the handle.

There are context-free grammars for which shift-reduce parsing cannot be used. Every shift-reduce parser for such a grammar can reach a configuration in which the parser, knowing the entire stack contents and the next input symbol, cannot decide whether to shift or to reduce (a shift/reduce conflict), or cannot decide which of several  reductions  to make  (a  reduce/reduce  conflict). We  now  give some examples of syntactic constructs that give rise to such grammars. Techni-cally, these grammars are not in the LR(fc) class of grammars defined in Section 4.7; we refer to them as non-LR grammars. The k in LR(k) refers to the number of symbols of lookahead on the input. Grammars used in compiling usually fall in the LR(1) class, with one symbol of lookahead at most.

Note  that  shift-reduce  parsing can be  adapted to  parse certain  ambiguous grammars, such as the if-then-else grammar above. If we resolve the shift/reduce conflict on else in favor of shifting, the parser will behave as we expect, associating each else with the previous unmatched then . We discuss parsers for such ambiguous grammars in Section 4.8.

Another common setting for conflicts occurs when we know we have a han-dle, but the stack contents and the next input symbol are insufficient to de-termine which production should be used in a reduction. The next example illustrates this situation.

Example 4.39 : Suppose we have a lexical analyzer that returns the token name id for all names, regardless of their type. Suppose also that our lan-guage invokes procedures by giving their names, with parameters surrounded by parentheses, and that arrays are referenced by the same syntax. Since the translation of indices in array references and parameters in procedure calls are different, we want to use different productions to generate lists of actual parameters and indices. Our grammar might therefore have (among others) productions such as those in Fig. 4.30.

A  statement beginning  with  p ( i , j )  would appear  as  the  token  stream id(id, id)  to the parser.  After shifting the first three tokens onto the stack, a shift-reduce parser would be in configuration 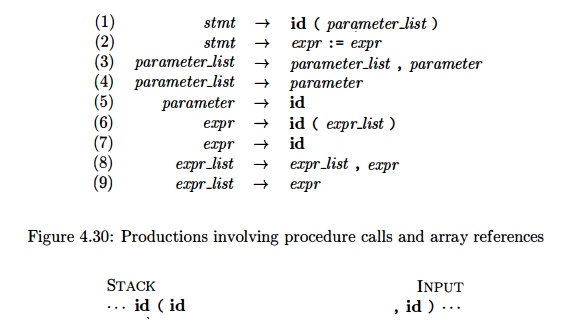 It is evident that the id on top of the stack must be reduced, but by which production? The correct choice is production (5) if p is a procedure, but pro-duction (7) if p is an array. The stack does not tell which; information in the symbol table obtained from the declaration of p must be used.

One solution is to change the token id in production (1) to procid and to use a more sophisticated lexical analyzer that returns the token name procid when it recognizes a lexeme that is the name of a procedure. Doing so would require the lexical analyzer to consult the symbol table before returning a token.

If we made this modification, then on processing p ( i , j )  the parser would be either in the configuration

or in the configuration above. In the former case, we choose reduction by production (5); in the latter case by production (7). Notice how the symbol third from the top of the stack determines the reduction to be made, even though it is not involved in the reduction. Shift-reduce parsing can utilize information far down in the stack to guide the parse.

Exercise 4 . 5 . 3 : Give bottom-up parses for the following input strings and grammars: