The distance between the object and the robot hand is measured using the range sensors Within it is range of operation.

The distance between the object and the robot hand is measured using the range sensors Within it is range of operation.

The calculation of the distance is by visual processing. Range sensors find use in robot navigation and avoidance of the obstacles in the path.

The - location and the general shape characteristics of the part in the work envelope ofthe robot S done by special applications for the range sensors.

There are several approaches like, triangulation method, structured lighting approach and time-of flight range finders etc. In these cases the source of illumination can be light-source, laser beam or based on ultrasonic.

The object is swept over by a narrow beam of sharp light.

The sensor focused on  a small  spot  of the object surface detects the reflected beam of light.

If  ‗8‘is the angle made by the ill source and the sensor, the dist 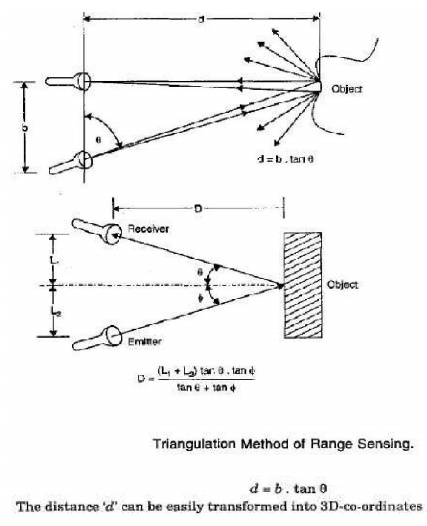 This approach consists of projecting a light pattern the distortion of the pattern to calculate the range. A pattern in use today is a sheet of light generated narrow slit.

As illustrated in. Figure, the intersectio yields a light Stripe which is viewed through a television camera displaced a distance B from the light source.

The stripe pattern is easily analyzed by a computer to obtain range information. For example, an inflection indicates a change of surface, and a break corresponds to a gap between surfaces.

Specific range values are computed by first calibrating the system. One of the simplest arrangements is shown in Figure, which represents a top view of Figure.

In this, arrangement, the light source and camera are placed at the same height, and the sheet of light is perpendicular to the line joining the origin of the light sheet and the center of the camera lens.

We call the vertical plane containing this line the reference plane.

The objective of the arrangement shown in Figure. is to position the camera so that every such vertical stripe also appears vertical in the image plane.

In this way, every point, the same column in the image will be known to have the same distance to the ‗reference plane.