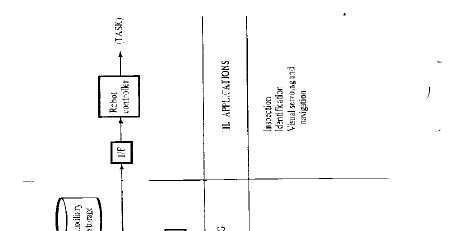 The hardware and software for performing the function of sensing and processing the image and utilizing the results obtained to command the robot.

The sensing and digitizing functions involve the input of vision data by means of a camera focused on the scene of interest. Special lighting techniques are frequently used to obtain an image of sufficient contrast for later processing.

The image viewed by the camera is typically digitized and stored in computer memory. The digital image is called a frame of vision data, and is frequently captured by a hardware device called a frame grabber.

These devices are capable of digitizing images at the rate of 30 frames per second. The frames consist of a matrix of data representing projections of the scene sensed by the camera.

The elements of the matrix are called picture elements, or pixels. The number of pixels are determined by a sampling process per formed on each image frame.

A single pixel is the projection of a small portion of the scene which reduces that portion to a single value. The value is a measure of the light intensity for that element of the scene.

Each pixel intensity is converted into a digital value. (We are ignoring the additional complexities involved in the operation of a color video camera.)

The digitized image matrix for each frame is stored and then subjected to image processing and analysis functions for data reduction and interpretation of the image.

Typically an image frame will be threshold to produce a binary image, and then various feature measurements will further reduce the data representation of the image.

This data reduction can change the representation of a frame from several.