Humans can grasp an object without information such as a coefficient of friction or weight.

Humans can grasp an object without information such as a coefficient of friction or weight. To implement this graspingmotion with the robot hand, sensors have been proposed that detect an incipient slip within the contact surface or stick-slip.

The sensor is constructed of electrode and pressure conductive rubber(Inaba Rubber Co., Ltd.) as shown in figure.

The voltage difference Vp is measured and the signal processing is performed. Then the initial slip can be detected. The pressure conductive rubber was a high polymer material primarily composed of silicone rubber with carbon particles uniformly distributed within. 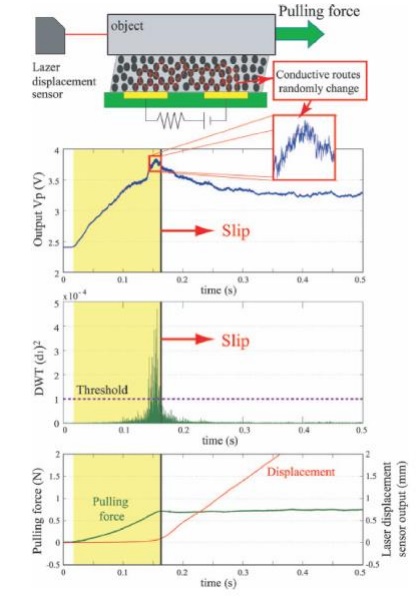 As shown in figure, the object is placed on the surface of the sensor. The upper graph  shows  the  output  of  the slip  sensor  when  pulling  force  is  applied  to  the  object.

The  lowest  graph  shows  the pulling  force  and  its position  shifts  through  slippinge.

First, the pulling force is increased until about 0.15s, after which it remains roughly constant. Specifically, it can be considered that a transition from static friction to dynamic friction occurs at the place marked with a verticalline in the figure.

Here, looking at the enlarged portion of the upper graph, a complex change in the voltage emerges immediately before the occurrence of slip (the time of the initial slip). Upon performing a frequency analysis with respect to this voltage change, it was found that the sensor output Vp at the time of the initial slip includes a high frequency component of severalkHztoseveral10kHz.In this regard, such high-frequency change does not occur when thechangeinforceisinnormaldirection.The slip sensor presented here extracts this high-frequency component by applying the discrete wavelet transform (DWT) and detects the initialslipoftheobject.The middle graph presents the results of DWT power using Haar wavelets. It is clear that immediately before slip occurs, the DWT power increases.

Hundreds of frame grabbers are on the market to allow integration of digital and analog machine-vision cameras with host computers. Varying features make each one unique for a particular application. When evaluating frame grabbers for a specific application, developers must be aware of specific camera types (either digital or analog), the sensor types they use (area or linescan), their systems requirements, and the cost of peripherals.

in high-speed semiconductor applications. The Cam a maximum of 680 Mbytes/s (64-bit at 85 MHz), currently the highest bandwidth on the market.

High-speed applications can also benefit from onboard tap reordering that can be accomplished with many frame grabbers. This removes the burden of recomposing an entire image from complex multitap cameras (several simultaneous data channels) from the host computer. Other features, such as the recently available power-over-Camera Link standard, offer simpler integration (a single cable for power and data) of compatible Camera Link cameras when this feature is available on the frame grabber.