of receivers and transmitters. Usually, the stripes are arranged to provide a binary number proportional to the shaft angle. The first track might have two stripes, the second four, the third eight, and so on. In this way the angle can be read directly from the encoder without any necessary counting. 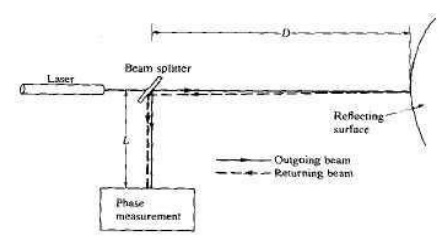 A pulsed-laser system described by larvis [produces a two-dimensional array with values proportional to distance. The two-dimensional scan is accomplished by deflecting the laser light via a rotating mirror.

The 66 working range of this device is on the order of I to 4 m, with an accuracy of ± 0. 25 cm. Figure shows a collection of three-dimensional objects, and Figure is the corresponding sensed array displayed as art image in which the intensity at each point is proportional to the distance between the sensor and the reflecting surface at that point (darker is closer).

The bright areas around the object boundaries represent discontinuity in range determined by post processing in a computer An alternative to pulsed light is to use a continuous-beam laser and measure the delay (i.e., phase shift) between the outgoing and returning beams.

Unlike inductive and Hall-effect sensors which detect only ferromagnetic materials, capacitive sensors are potentially capable (with various degrees of sensitivity) of detecting all solid and liquid materials.

As their name implies, these sensors are based on detecting a change in capacitance induced by a surface that is brought near the sensing element.

The basic components of a capacitive sensor are shown in Figure. The sensing element is a capacitor composed of a sensitive electrode and a reference electrode. These can be, for example, a metallic disk and ring separated by a dielectric material.

A cavity of dry air is usually placed behind the capacitive element to provide isolation.

The rest of the sensor consists of electronic circuitry which can be included as an integral part of the unit, in which case it is normally embedded in a resin to provide sealing and mechanical support.

There are a number of electronic approaches for detecting proximity based on a change in capacitance.

One of the simplest includes the capacitor as part of an Oscillator circuit designed so that the oscillation starts only when the capacitance of the sensor exceeds a predefined threshold value.

The start of oscillation is then translated into an output voltage which indicates the presence of an object. This method provides a binary output whose triggering sensitivity depends on the threshold value.

A more complicated approach utilizes the capacitive element as part of a circuit which is continuously driven by a reference sinusoidal waveform.

A change in capacitance produces a phase shift between the reference signal and a signal derived from the capacitive element.

The phase shift is proportional to the change in capacitance and  can thus  be used as a      basic mechanism for proximity detection.

The previously discussed proximity sensors are useful for detection of ferro-magnetic matter only. If the robot has to handle other type of materials ultrasonic sensors find the application.

The main part in this type of sensor is the transducer which can act both as transmitter and receiver. The sensor is covered by a resin block which protects from dust and humidity.

For the acoustic damping, absorber material is provide as shown in Figure. Finally a metallic housing gives general protection.