The wind is the main geomorphic agent in the arid region.

Action of the wind

The action of the wind is carried in the following ways;

1.        Deflation: Removal of sand and dust particles by wind. It forms depression in the desert. When depression is filled with water, it is called as Oasis.

2.        Abrasion: Action of wind in which sand particles carried by the wind strike against the rock.

3.        Attrition: Sand particles carried by the wind striking each other is known as attrition.

When deflation causes a shallow depression by persistent movements of wind, they are called as deflation hollows.

A mushroom rock, also called rock pedestal, or a pedestal rock, is a naturally occurring rock whose shape, as its name implies, resembles a mushroom. 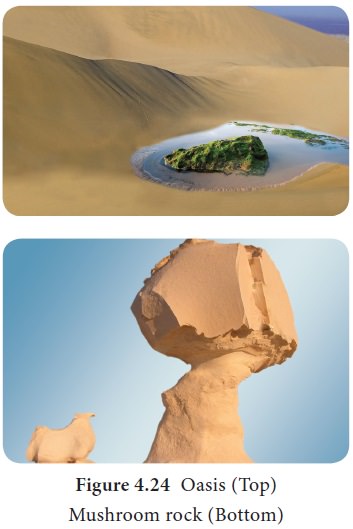 In deserts, a greater amount of sand and rock particles are transported close to the ground by the winds which cause more erosion in the lower part of the rock than the top. These result in the formation of rock pillars shaped like a mushroom with narrow pillars with broad top surfaces.

Yardangs are extensively grooved, fluted, pitted and irregular rock ridges or reliefs of about 1 to 10 meters high running parallel to the prevailing winds. They are caused by differential erosion. When the sand-laden wind corrades zones of softer or weaker rock between harder vertical ridges from old lake sediment where soft, consolidated rock and bedrock surfaces are eroded into alternating ridges and furrows. Large-scale yardangs are found in Egypt (near Kom Ombo, north of Lake Aswan).

Zeugen is a landscape of alternate horizontal ridges and furrows made by the action of wind abrasion. It may be as high as 30 m height. 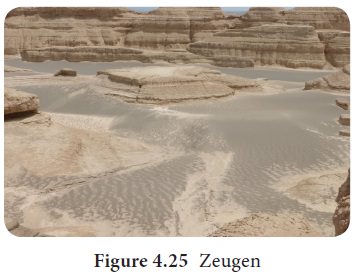 Dry hot deserts are good places for sand dune formation. According to the shape of a sand dune, there are varieties of sand dune forms like Barchans, Seif dune, etc. The barchan is one of the classic desert landforms. It is a crescent-shaped dune with the horns of the crescent stretching out in the leeward direction. Barchan dunes may reach more than 27 meter in height. Seif dunes are long ridges of sand. In general they are aligned in the direction of the prevailing wind. The slip face of seif dunes are probably formed by eddies. The depressions between seif dune ridges are swept clear of sand by the winds. The ridges 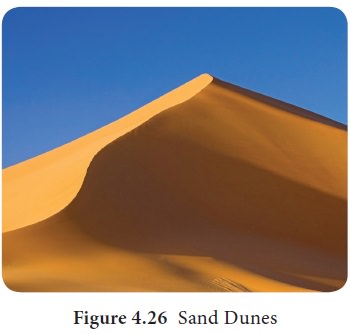 In several large areas of the world, the surface is covered by deposits of wind transported silt that has settled out from dust storms over many thousands of years. These depositions are called as Loess.

When the high relief structures in deserts are reduced to low featureless plains by the activities of wind, they are called as Pediplains.