The course of a river includes the upper stage, the middle stage, and the final stage.

The course of a river includes the upper stage, the middle stage, and the final stage. Each stage of the river is dominated by a kind of work. Let’s discuss the stages of a river, the main work and the landforms made in each stage. 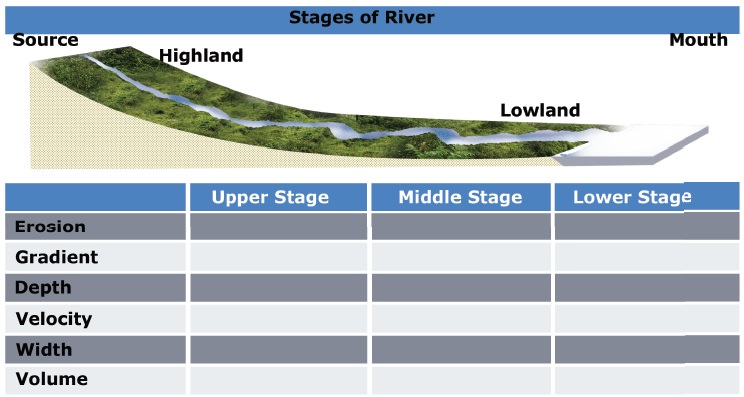 The upper stage of a river is also called the youthful stage or mountain stage. The velocity and speed of the stream are very high because the slope here is steep. The vertical erosion is the most dominant work here. The valley is formed here. The place where a river starts is called a source. In the mountain stage, the number of small streams originates from different locations. They are called Tributaries.

The place where two rivers join is called as the confluence. The mountain which has two river systems draining on either side of the slope is termed as the water divide.

This is the final stage of a river where the valleys are extremely broad and it has generally gentle slope. The valley becomes almost flat which is called a peneplain. Most of the peneplain forms low residual hills with steep slopes which are called as Monadnocks.

The main work of the river in this stage is the deposition. The depth of the river is shallow here. When the main river splits into many small rivers, they are called as the distributaries. The place where the river ends is called mouth of the river. (for example: Sea coast, Lake.)