A glacier is a huge mass of ice that moves slowly along the mountain slope.

A glacier is a huge mass of ice that moves slowly along the mountain slope. The term “glacier” comes from the French word glace which means ice. Glaciers are often called “rivers of ice”. It forms where the accumulation of snow exceeds its ablation over many years.

The places where the snow lies for the whole year are called snowfields. The imaginary line above which there is a permanent snowfield is known as the snow line. The snowfields are always situated above the snow line. The snow line differs according to latitude, amount of snowfall, the direction of the wind and the physical features of the region. Snow starts melting below the snow line. Under the pressure of the upper layers, the lower layers of the snow field begin to melt causing the mass of snow to move down slope as glacier. Glacier moves at an average speed of 1meter per day. Over 96 percent of the glaciers occur in Antarctica and Greenland.

The Glaciers are of three types. They are;

The continental glaciers are found in polar regions. In these areas, all the precipitation is in the form of snow. The snow that falls from year to year gradually gets accumulated. As a result, these regions are covered by an extensive ice mass. This is known as ice sheet or continental glacier. It is estimated that the maximum thickness of the ice sheets of Greenland is 3,400 meter, while the maximum thickness of the ice sheet of Antarctica is 4776 meter. Sometimes, the ends of the ice sheet projects outwards over the sea. The waves of the sea strike against them and break the ice sheets into blocks of floating ice known as Icebergs.

It is the covering of snow and ice on the oceans of poles. The ice caps can cover vast areas with the extensive accumulation of snow and ice. Example, Svartissen ice cap in Northern Norway.

These are also known as Alpine glaciers. They flow like tongues of ice down through the mountain valleys from the ice caps. The piedmont glaciers form continuous ice sheets at the base of mountains. The valley glaciers or Alpine glaciers are found in higher regions of the Himalayas and on all such high mountain ranges of the world.

A moving ice mass or glacier possesses certain characteristics of movement, speed, and surface structure. The rate of movement of the glacier is very slow. 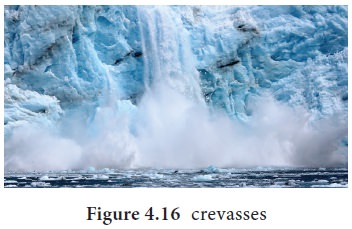 Pure ice is capable of wearing down massive rocks when equipped with angular rock fragments. The glacier can groove, scratch, and chisel the rock surface. It has a powerful abrasive effect.

As a result, a glacier during its lifetime creates various landforms which may be classified into erosional and depositional landforms.

The landforms created by glaciers are mainly found in the mountainous regions.

The chief erosional landforms by the glaciers are as follow: 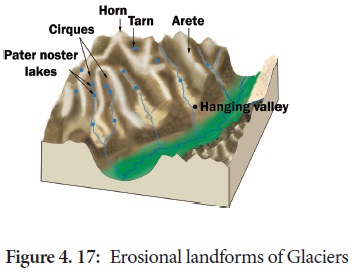 U-Shaped Valley is a typical glacial feature. Since glacial mass is heavy and slow moving, erosional activity is uniform in all directions. A steep-sided curved bottom valley has a U shaped profile.

A Cirque or Corrie is an amphitheater-shaped hollow basin cut into a mountain ridge. It has a steep-sided slope on three sides, an open end on one side and a flat bottom. When the ice melts, the Cirque may develop into a Tarn Lake and the whole thing appears like a big armchair.

It is a steep-sided, sharp-tipped saw toothed ridges which have undergone glacial erosion from two sides. These comb like ridges are called as arete. 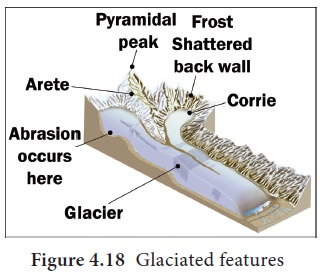 If the summit of the Arete is roughly inclined, it gives rise to pyramidal peaks which are known as horns. Example, Matterhorn of Alps-Switzerland.

Roche Moutonnees or sheep rock is a glaciated bedrock surface, usually in the form of rounded knobs. The upstream side of a roche moutonnee has been subjected to glacial scouring that has produced a gentle, polished, and striated slope and the downstream side has been subjected to glacial plucking that has resulted in a steep, irregular and jagged slope.

A rock mass surrounded by ice is called Nunatak. It stands out as an island in the ice.

The fjord is formed as a steep-sided narrow entrance like feature at the coast of a glaciated region where the stream meets the coast. Fjords are common in Norway, Greenland and Newzealand.

When the glaciers melt or recede they deposit the rock material, brought by them, forming hillocks of various shapes and sizes. The depositional landforms of the glaciers are;

Moraines are the piles of dirt and rock that are deposited by a glacier as it moves across the landscape. These debris fields exist in places where glaciers have moved through in the past. There are many kinds of glacial moraines that form. Moraines are generally classified based on their location.

Lateral moraines are ridges of debris that run parallel to the sides of a glacier. This is often accompanied by scraping of the valley sides which means the debris from the moraine creates high ridges above the glacier.

Ground moraines are glacial depositions formed on the floor of glacial valley. Ground moraines can be deposited in between lateral moraines in the case of many alpine glaciers.

Medial moraines are ridges of debris that are left down a valley floor at the middle of two glaciers. Both glaciers merge together and their debris combine to form a consistent moraine field along their borders. They are actually the merging of two lateral moraines which continue as medial moraines.

Terminal or end moraines are left by the end of a glacier. The slower a glacier moves the bigger the moraine will be as the glacier has more time to accumulate outside debris. 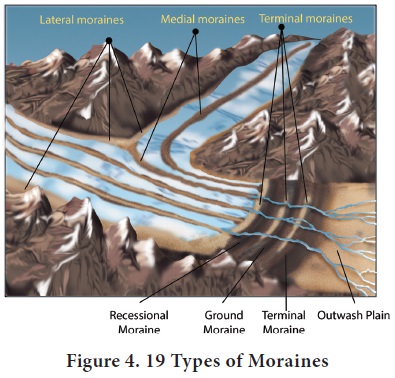 This recessional moraine runs across the landscape behind a terminal moraine. They are caused by times when the glacier slows or stops in its movement. It is formed because the receding glacier pauses in certain places for a long time before continuing its movement.

When the glacier reaches its lowest point and melts, it leaves behind a layered deposition of rock debris, clay, sand, gravel, etc. This layered surface is called as an Outwash Plain.

It is a winding ridge of depositions of rock, gravel, clay, etc, running along a glacier in an outwash plain. The Eskers resemble the feature of an embankment and are often used for laying roads.

It is an inverted boat-shaped deposition in an outwash plain caused by deposition.

Kames are the number of ridges formed along the ice front.