Mass wasting is the movement of a large mass of rock, soil and debris downward by the pull of gravity.

Mass wasting is the movement of a large mass of rock, soil and debris downward by the pull of gravity. It is also called a mass movement or slope movement. It may happen suddenly or slowly. Generally, mass wasting is classified by the type of material involved (mud, soil, and rock) and type of motion (fall-free-falling pieces, slide-material moves along the rock slope and flow–material mixed with water).

Following are the types of mass wasting: 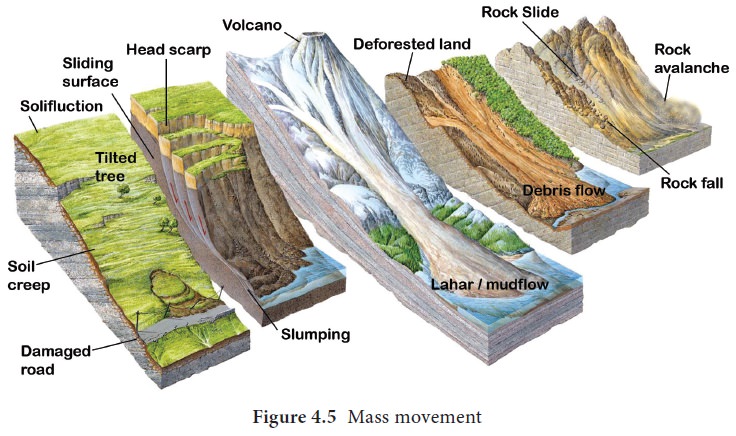 Rock falls occur when pieces of rock break from a cliff. Frost wedging may also eventually loosen large blocks causing them to fall. The accumulation of rock debris at the base of a steep slope is called talus. 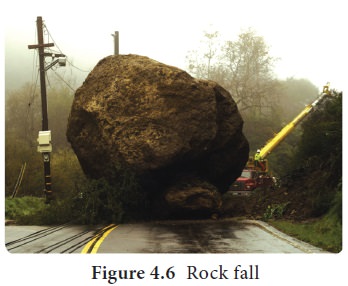 Rockslides usually follow a zone of weakness. Presence of water increases slippage. Collisions down the slope generally break the rock mass into rubble that eventually results in rockslides.

Landslides occur when a large piece of rock breaks off and slides down hill. It is often initiated by earthquakes and very heavy rain.

Great mass of bed rock moves downward by rotational slip from a high cliff is known as slump. Most common reason for slumping is erosion at the base of the slope which reduces the support for overlying sediments.

Debris slide is more extensive and occurs on a larger scale than slump but there is a little amount of water. The materials involved in debris slide are a mixture of soils and rock fragments.

Debris flow is defined as mass wasting event in which turbulence occurs throughout the mass. Debris flow includes earth flows, mudflows, and debris avalanches. Debris flow occurs when the rock or soil mass loses coherency when lots of water is involved. Debris becomes mixed up completely and flows as liquid mud. It often carries large boulders which can be very destructive. When earth material moves down a hillside as a fluid-like mass, it is called an earth flow. These flows typically occur in humid areas on steep slopes with thick, clay-rich soil that becomes saturated with water during storms. 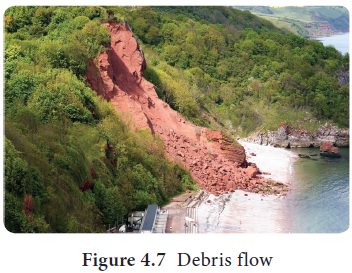 Mudflow is a liquid mass of soil, rock debris and water that moves quickly down a well defined channel. They occur most often in mountainous semiarid environments. A mudflow originating on a volcanic slope is called a lahar.

The deadliest type of debris flow is the debris avalanche. It is a rapidly churning mass of rock debris, soil, water, and air that moves down steep slopes. The trapped air may increase the speed of an avalanche by acting as a cushion between the debris and the underlying surface

Creep is a slow and gradual movement of soil downhill. Its velocity is typically less than a centimetre per year. Freezing and thawing contribute the soil creep by progressively moving soil particles down the hill. Creep is manifested at the surface by things like tilted utility poles, fences and trees Vegetation helps reduce the rate of soil creep. 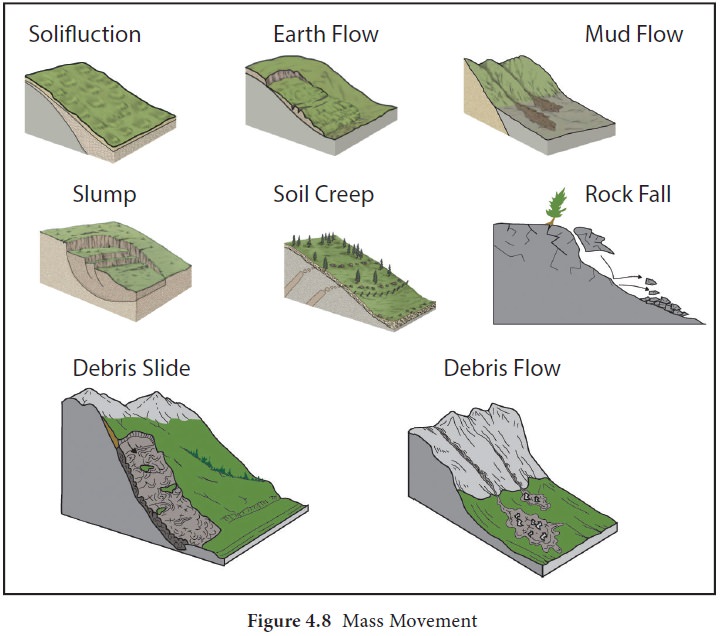