Horizontal movement of sea water caused by the wind, rotation of the earth, etc., are called waves.

Horizontal movement of sea water caused by the wind, rotation of the earth, etc., are called waves.

How do Waves Erode?

Waves carry out the erosive work in the following ways.

1.        Abrasion: The waves striking against the coast with eroded materials is called abrasion. Abrasion is also called as the corrasion.

2.        Hydraulic action: The waves force water and air into the cracks in the rock. The parcel of air can be compressed by the surging water and the waves retreat, air expands explosively, weakening the joints and cracks and causing the rock to break. This is called the Hydraulic action.

3.        Corrosion: The action of dissolving soluble rocks by waves is termed as the corrosion or solution.

4.        Attrition: Eroded materials like boulders and rocks knock together to wear out into smaller particles. This is called attrition.

Shore line is boundary between land and water.

Backshore is the beach zone starting from the limit of frequent storm waves to the cliff base.

Foreshore is the portion of the beach subject to wave action during non-storm conditions.

Offshore is the shallow zone of the continental shelf

Coastline is the boundary where the land meets the sea

Swash is the waves washing up the beach.

Landforms by the Erosion of Waves

Wave Cut Platform: Rock cut flat surfaces in front of a cliff are called wave-cut platform. They are slightly concave upward. It is also formed when blowhole is collapsed. 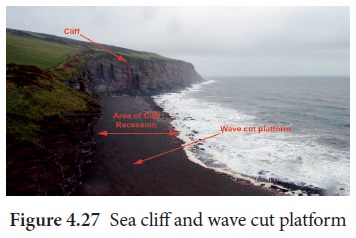 A sea cave is a hollow excavated by waves in a zone of weakness on a cliff. The cave depth is greater than the entrance width.

Sea caves usually form at points of geological weakness, such as bedding planes, joints, and faults. A 90 meter long sea cave is found in the Loliem beach in Canacona in Goa. The world’s most extensive cave is 1.5 km long Matainaka cave in New Zealand. 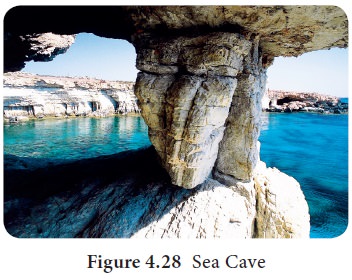 A blowhole may form in the roof of a sea cave by the hydraulic and pneumatic action of waves, with fountains of spray emerging from the top. If blowholes become enlarged, they may collapse. 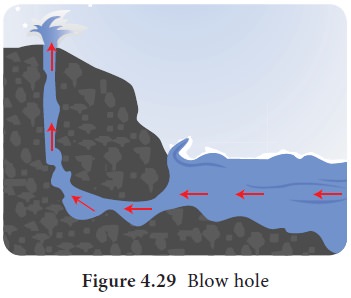 Arch is formed when the sea cave is cut right through by wave action. The arch is termed as sea tunnel if it is comparatively longer.

The stack is a steep and often vertical column of rock in the sea near a coast, formed by wave erosion.

It is formed when the natural arch is collapsed. It is also called chimney rock, needles, columns, pillars, skerries, etc,

Stump is the worn out stack.

The eroded materials are transported by the waves in different ways. The materials involved in the transportation by sea waves include silt, sand, gravel, cobble, pebble and boulder.

Landforms by the deposition of waves

Depositional landforms developed by the sea waves include the beach, bar, lagoon, spit, tombolo, barrier island, etc. Let us see one by one in detail.

1.        Beach is an elongated stretch of sands, pebbles, gravels, etc deposited along the coast. It can be a sandy beach or pebble beach. Praia da Cassino beach in Brazil is the world’s longest beach stretching for 200 km from the Rio Grande to the border with Uruguay. Marina beach, Chennai is the second longest beach in the world.

2.        The Bar is a stretch of sand deposition off the shoreline. The larger form of a bar is called barrier.

3.        The Lagoon is enclosed seawater between the bar and the coast. For example, Pulicat lake, located in the Tamil Nadu and Andhra Pradesh is a lagoon. 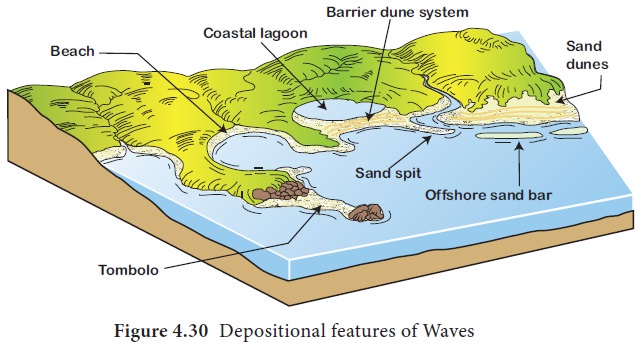 4.        Spit is a long, narrow ridge of sand or pebble with one end connected to the coast and the other end running into the sea. For example, Rameshwaram, Tamil Nadu.