Weathering is the process of disintegration and decomposition of rocks.

Weathering is the process of disintegration and decomposition of rocks. It is due to the action of climate, plants, animals and other living organisms which cause the rocks to break down physically, chemically and biologically.

Physical Weathering is the disintegration of rock mainly induced by elements of weather. It produces smaller, angular fragments of the same rock. It is caused by the change in temperature, pressure, water and wind. Physical weathering is further divided into different categories. They are thermal weathering, frost wedging and exfoliation.

In arid and semi-arid areas, the temperature increases, heat up and expand the rocks during the day and contract the rock materials when cooling at night. Under extreme temperature conditions, due to alternate expansion and contraction, the rocks crack and eventually split. The thermal weatherings are of two types. They are;

Alternate expansion and contraction of minerals of varying properties in the rocks due to temperature changes, makes the rocks break down into small pieces (Figure 4.2). Due to this, the breakup of rocks occurs, grain by grain. This is known as granular disintegration.

Block disintegration occurs in rocks such as granite rock. So in the areas of jointed igneous or layered sedimentary rocks due to the great diurnal range of temperature, the rocks may break up along the joints and cracks into a large rectangular shaped blocks.

Almost all liquids contract when frozen, but when water freezes it becomes larger in size or takes up more space. As water expands it puts great pressure on rocks.

When water enters into the cracks of rocks and freezes, the pressure exerted on the rock is enough to wedge the walls of the crack farther apart, thus expanding and deepening the crack. Thus, frost wedging results in weathering of rock.

Rocks generally heat or cool more on the surface layers. The alternate changes in temperature could cause their outer layers to peel off from the main mass of the rock in concentric layers just as the skin of an onion. The process by which curved layers of rock breakaway from the rock beneath them leaving behind dome shaped monoliths is called exfoliation (Figure 4.2). It is also called as ‘onion weathering’. Exfoliation occurs commonly in the arid areas.

1.        Solution: Some soluble minerals in the rock get dissolved when come in contact with water. Over a long period minerals get washed away from rock and sometimes leading to the formation of caves.

2.        Oxidation: When oxygen combines with water and iron, it weakens the rock and breaks it. Example, rusting of iron.

3.        Hydrolysis: It is the chemical breakdown of a rock substance when combined with water and forms an insoluble precipitate like clay mineral. The most common example of hydrolysis is feldspar found in granite changing to clay.

4.        Carbonation: Carbonation is the mixing of water with carbon dioxide to make carbonic acid. This acid reacts with minerals in the rocks. This type of weathering is important in the formation of caves.

Biological weathering is the alteration of rock by the action of plants, animals, and man. Burrowing and wedging by organisms like earthworms, termites, rodents, etc., help in exposing the rock surfaces to chemical changes with the penetration of moisture and air. Human beings by removing vegetation for agriculture and other activities also help in mixing and creating new contacts between air, water, and minerals in the rock materials. Plant roots make a great pressure on the rock materials mechanically breaking them apart. 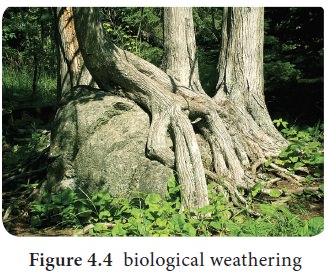